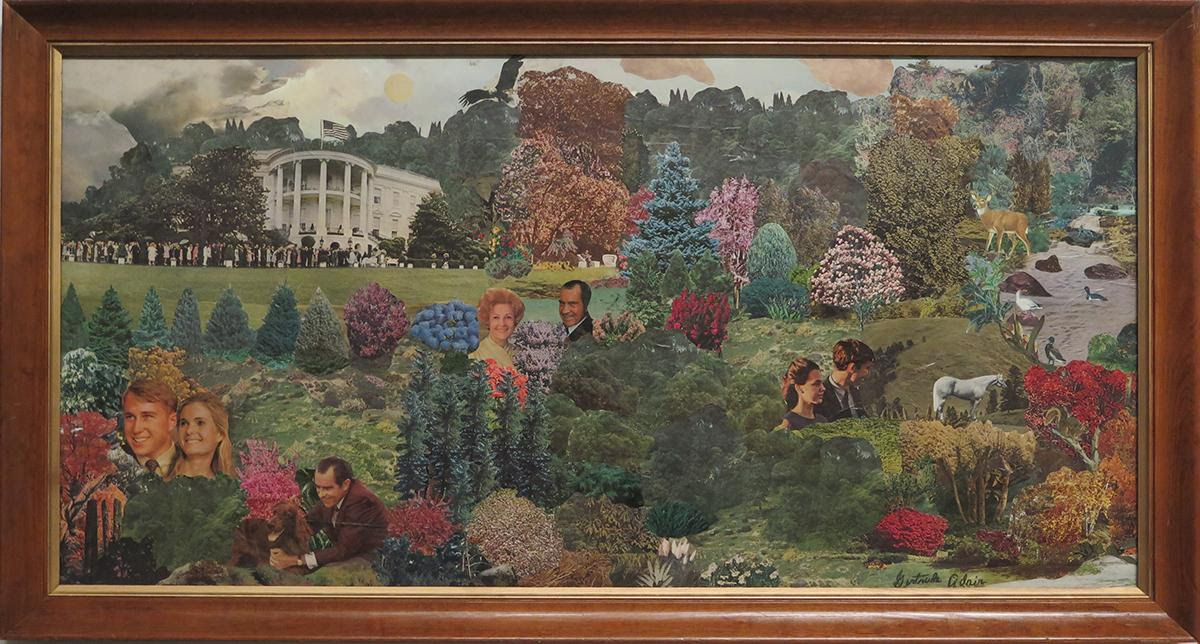 “Gardening is a wholesome avocation that encourages appreciation for nature and concern for the preservation and enhancement of our environment. It prompts a genuine respect for those who work in agriculture today. Gardening, above all, provides a special source of fulfillment when foresight, patience, and collaboration with soil and sunlight finally are repaid by lovely flowers and luscious harvests.” ﻿-Ronald Reagan

In 1986, President Reagan signed Proclamation 5462, naming the week starting April 13, 1986, National Garden Week; in 2002, the celebration was extended to the entire month of April by the National Gardening Association. First Lady Pat Nixon was an enthusiastic gardener and loved roses so much that she was named the first patroness of The Rose Society in 1972. Mrs. Nixon believed that the beauty and history of the White House should be made more accessible to the general public, and in early 1972 she set forth a plan, working in cooperation with several government agencies, to improve accessibility to the White House. On April 14, 1973, Pat Nixon hosted the first White House Garden Tour, a tradition upheld to this day. In 1990, Pat Nixon also planned and dedicated the Pat Nixon Rose Garden, a beautiful outdoor space integral to the Richard Nixon Presidential Library and Museum in Yorba Linda, California. 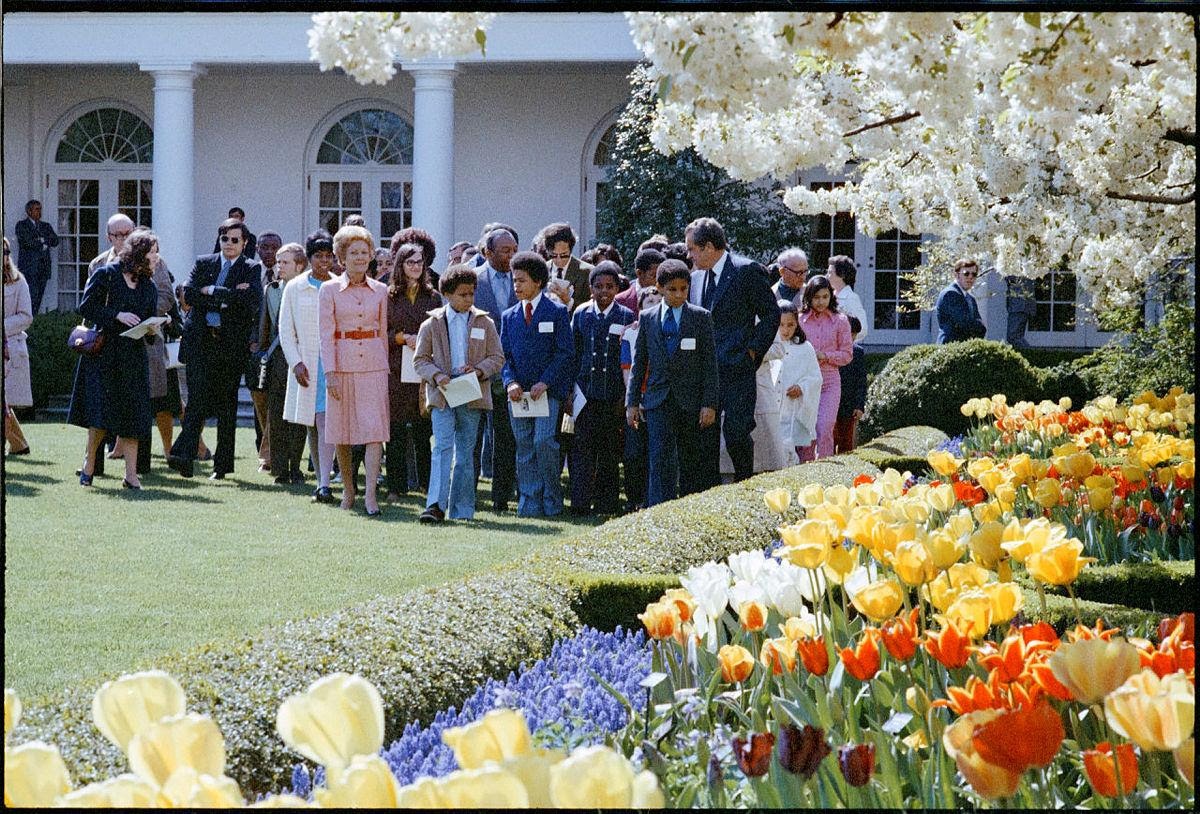 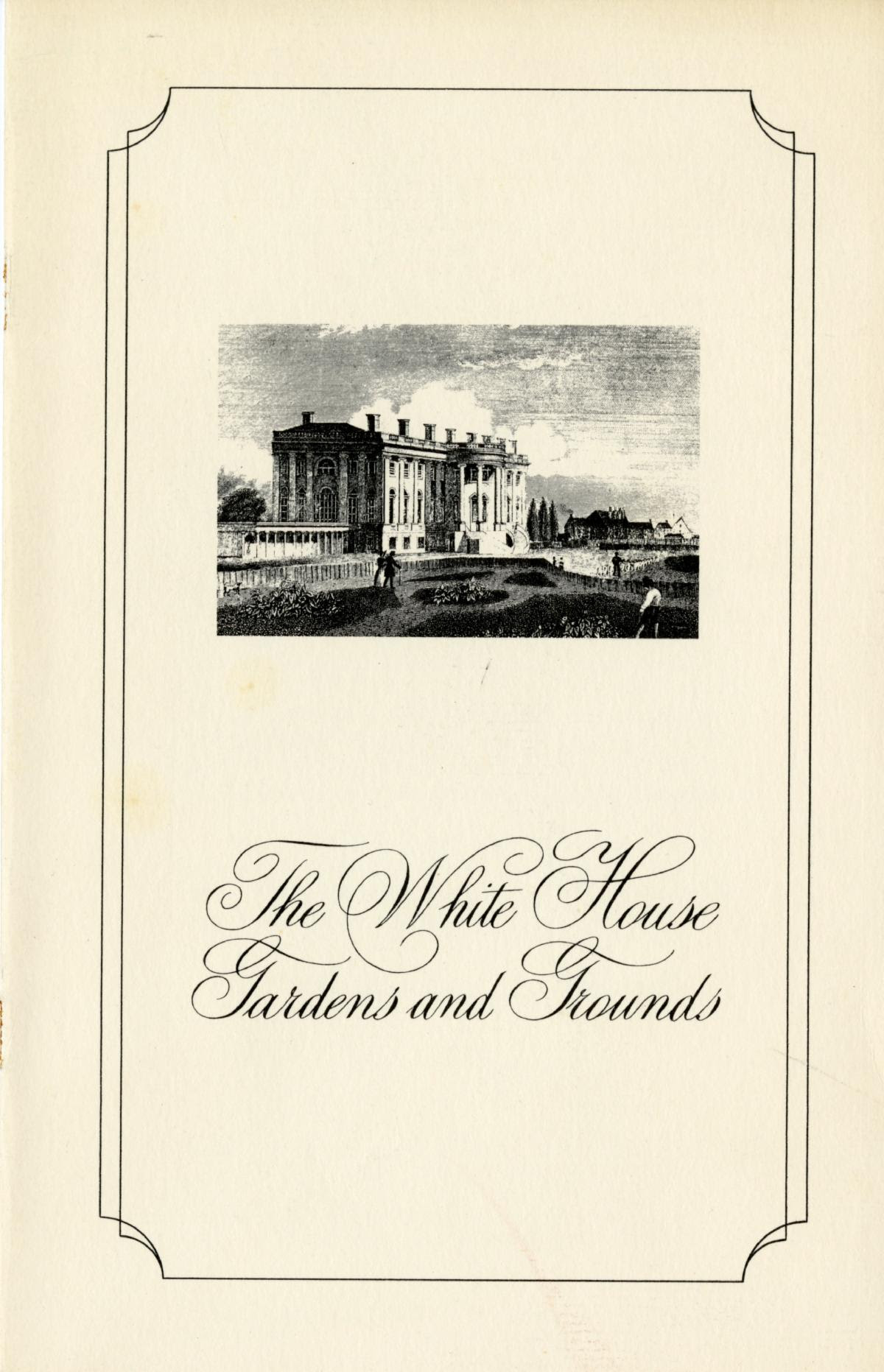 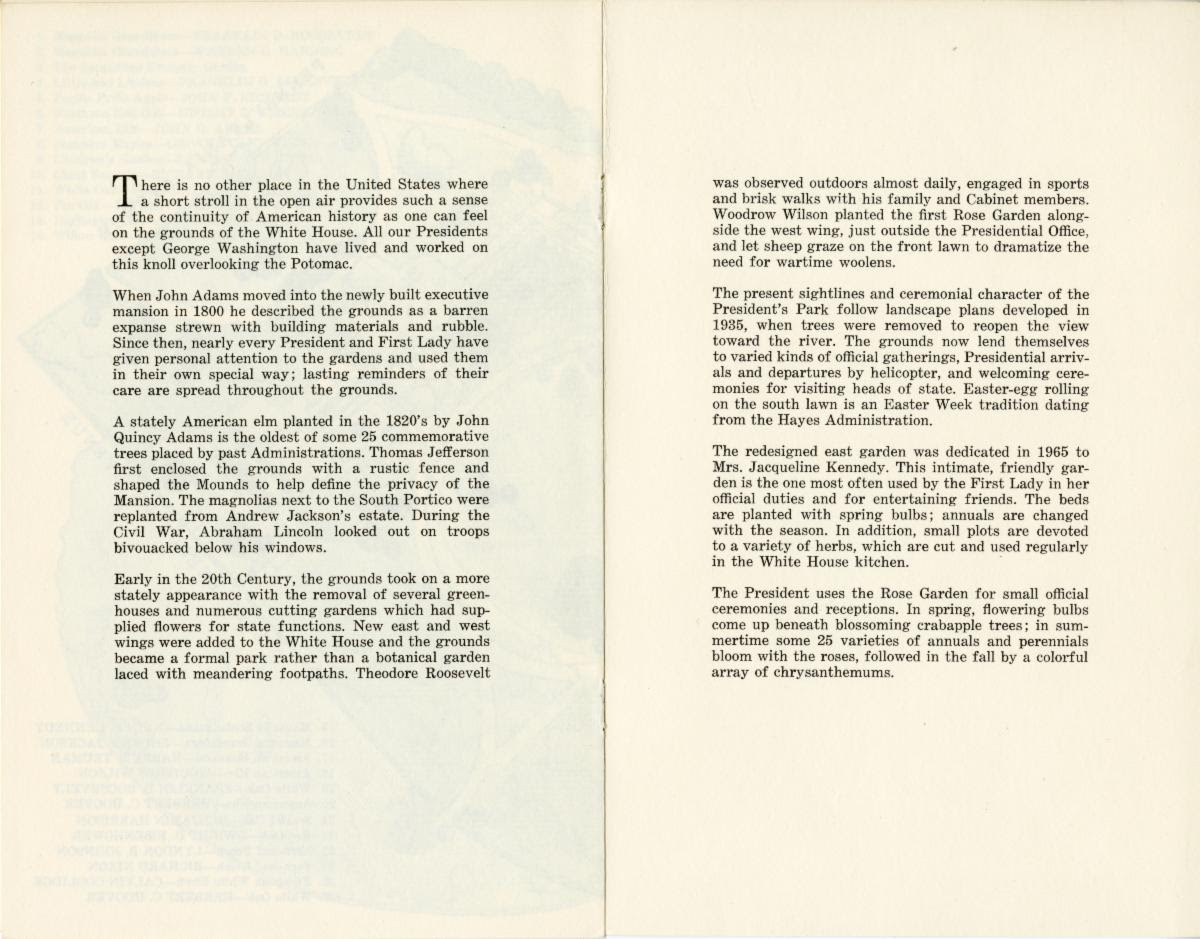 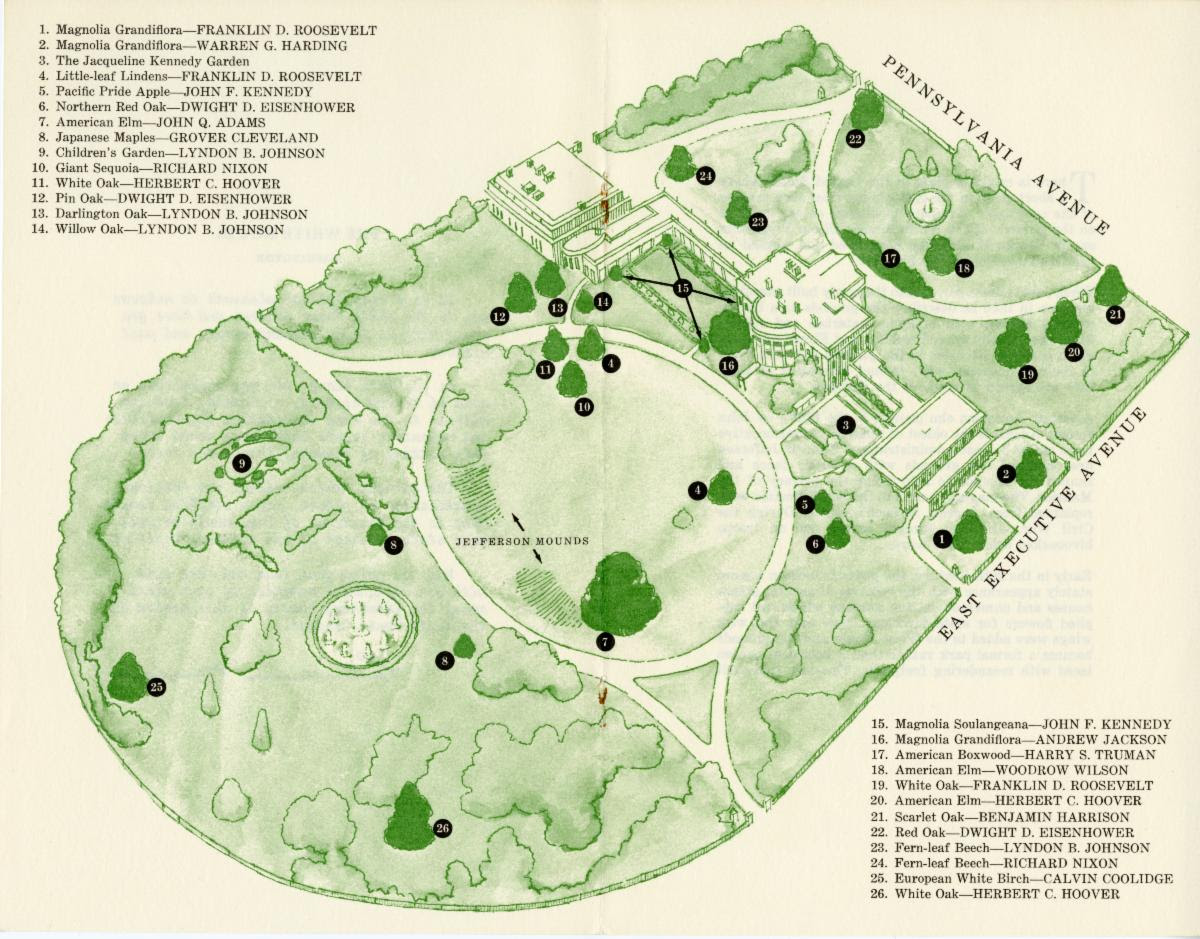 A program from The White House Garden and Grounds Tour, April 14 and April 15, 1973. Richard Nixon Presidential Library and Museum, National Archives and Records Administration, A.2010.70

Planning for the garden tour began in early 1972, with the goal of educating and entertaining White House visitors. Walking through much of the South Lawn, the Rose Garden, the Children’s Garden, and the Jacqueline Kennedy Garden, visitors were presented with an informational brochure and greeted with live music and large photos highlighting past events held on the grounds. The White House grounds, closed to the public after the bombing of Pearl Harbor on December 7, 1941, were opened once again when Pat Nixon welcomed guests back on April 14, 1973. Washington, DC Mayor Walter E. Washington and many local school children, accompanied by their family and teachers, were the first to visit. This tour of the grounds highlighted the Jefferson Mounds, the American Elm planted by President John Quincy Adams, the Giant Sequoia chosen by President Nixon, both California natives, and the Southern Magnolia tree planted by President Andrew Jackson. Over the next two days, 11,500 visitors toured the gardens and began a tradition that continues to this day. 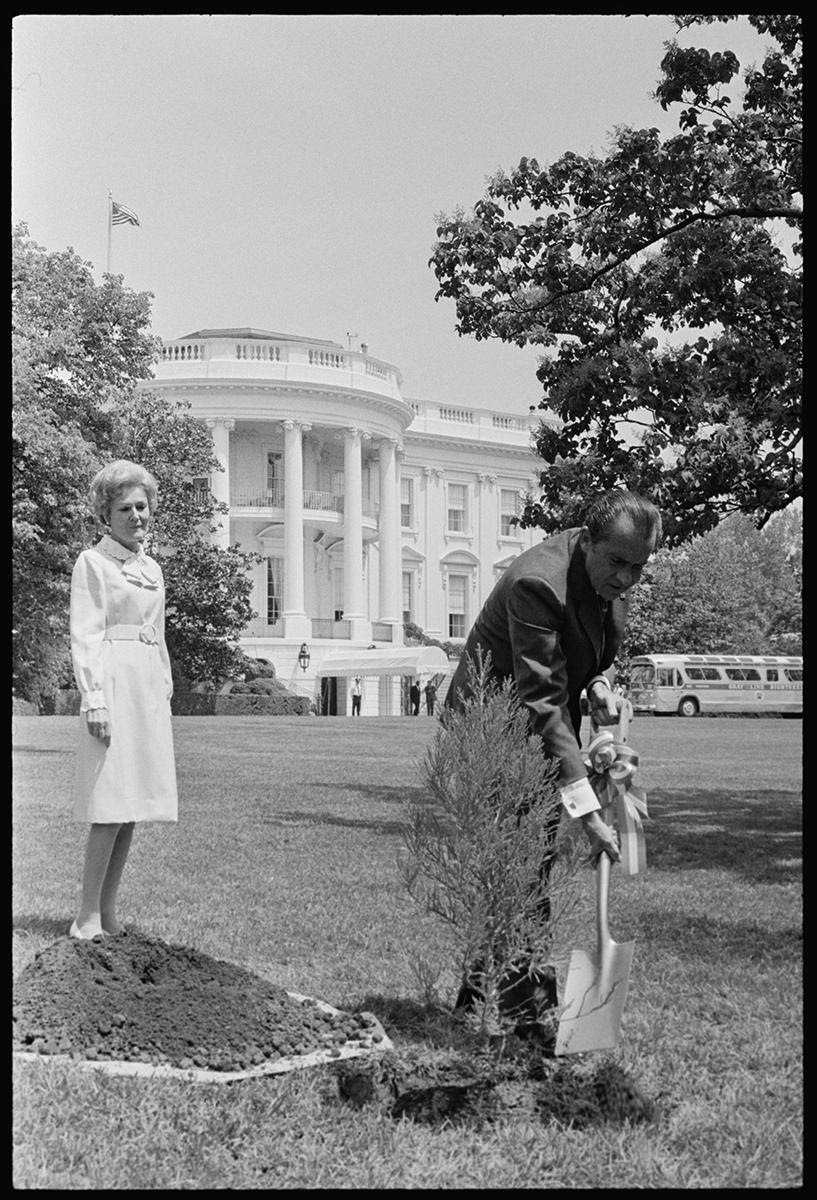 From the 5/15/1971 St. Louis Post-Dispatch, “President Richard M. Nixon planted a California sequoia on the south lawn of the White House yesterday, following a presidential tree-planting tradition that goes back to 1826. Mr. Nixon used a gold-covered shovel decorated with a red, white, and blue ribbon to plant the three-foot-tall, 5-year-old tree from the Angeles National Forest near Pear Blossom, Calif. He said he chose the sequoia because it “grows biggest and lasts longest.” the Tree planting was on 5/14/1971. WHPO-6308-10A 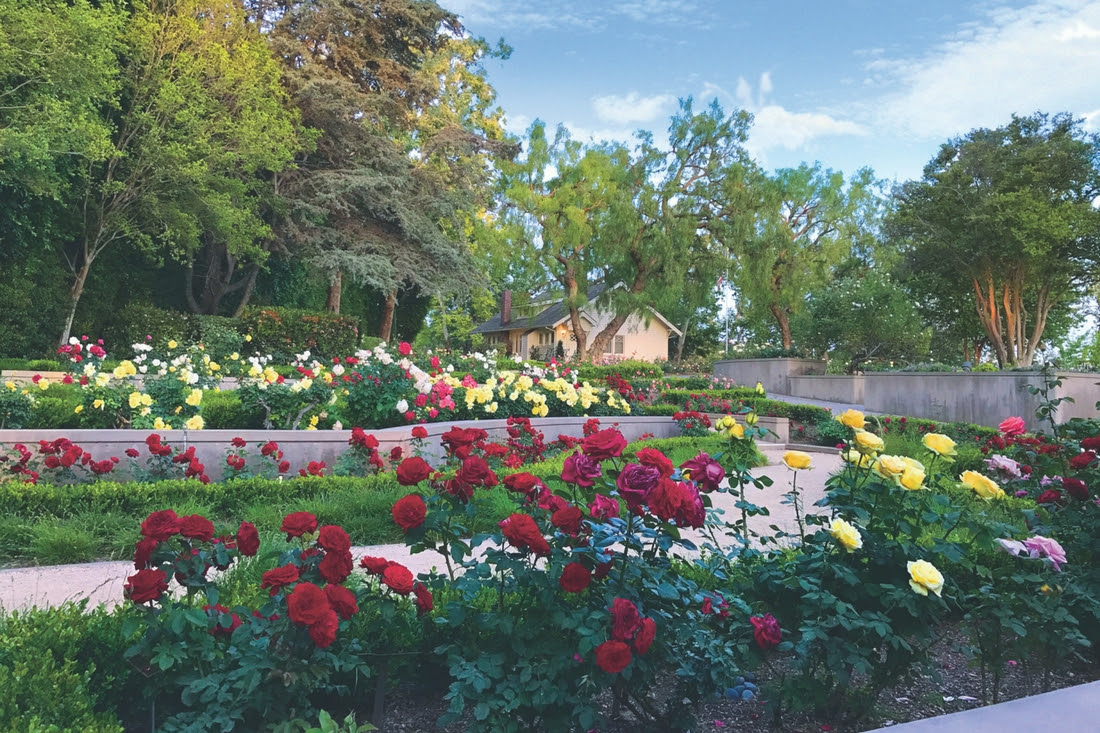 Picture of Richard Nixon’s birthplace from the First Lady’s Rose Garden. Courtesy of the Nixon Foundation. 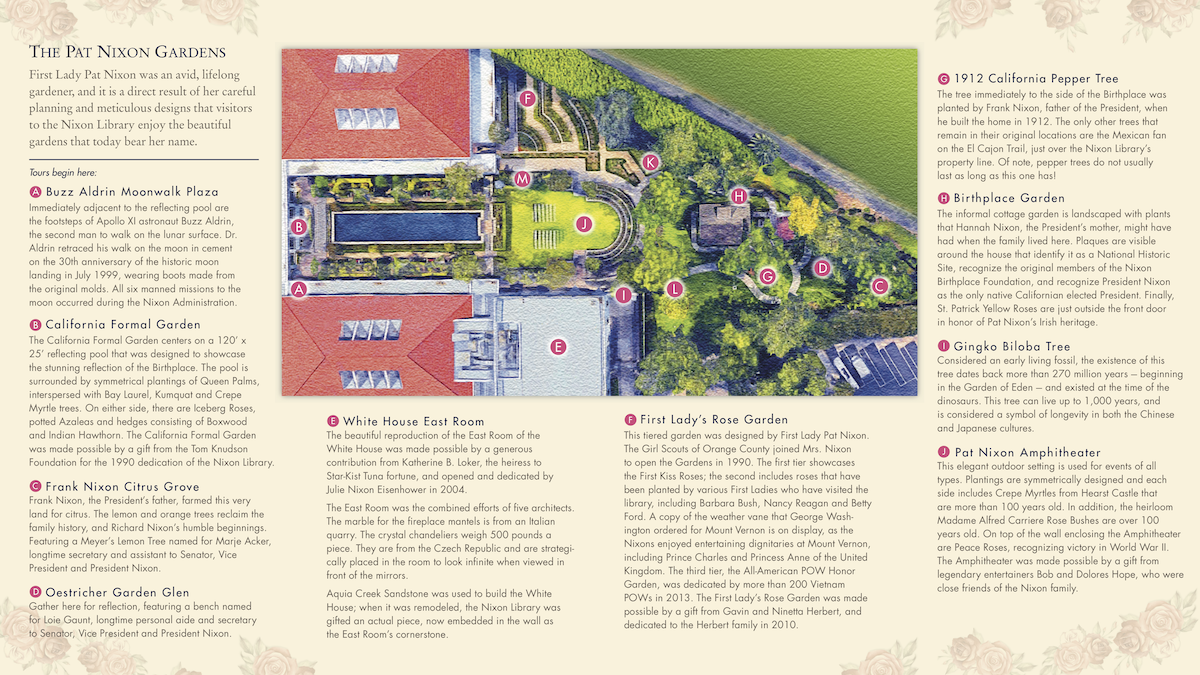 Pat Nixon Gardens Map circa 1990. Courtesy of the Nixon Foundation.

The Nixon Library and Gardens

The Pat Nixon Gardens located at the Richard Nixon Presidential Library and Museum in Yorba Linda, California, opened to the public in 1990, and are comprised of the Buzz Aldrin Moon Walk Plaza, California Formal Garden, Frank Nixon Citrus Grove, Oestricher Garden Glen, First Lady’s Rose Garden, 1912 California Pepper Tree, Birthplace Garden, and the Pat Nixon Amphitheater. Its grounds are home to many types of flora due to California’s unique climate. Palm trees, azaleas, kumquat bushes, and over 80 types of roses welcome visitors year-round. Heritage trees flank Richard Nixon’s birthplace with a California pepper tree planted by his father, Frank, in 1912, on one side and a magnolia tree grown by Pat from a seedling taken from the original Jackson magnolia at the White House on the other. Utilizing the skills she refined in planning the White House tours, Pat once again designed her rose garden to educate and captivate guests. The gardens are also the final resting place of President Richard Nixon and First Lady Pat Nixon. Please enjoy the virtual tour of the gardens narrated by their granddaughter Jennie Eisenhower. 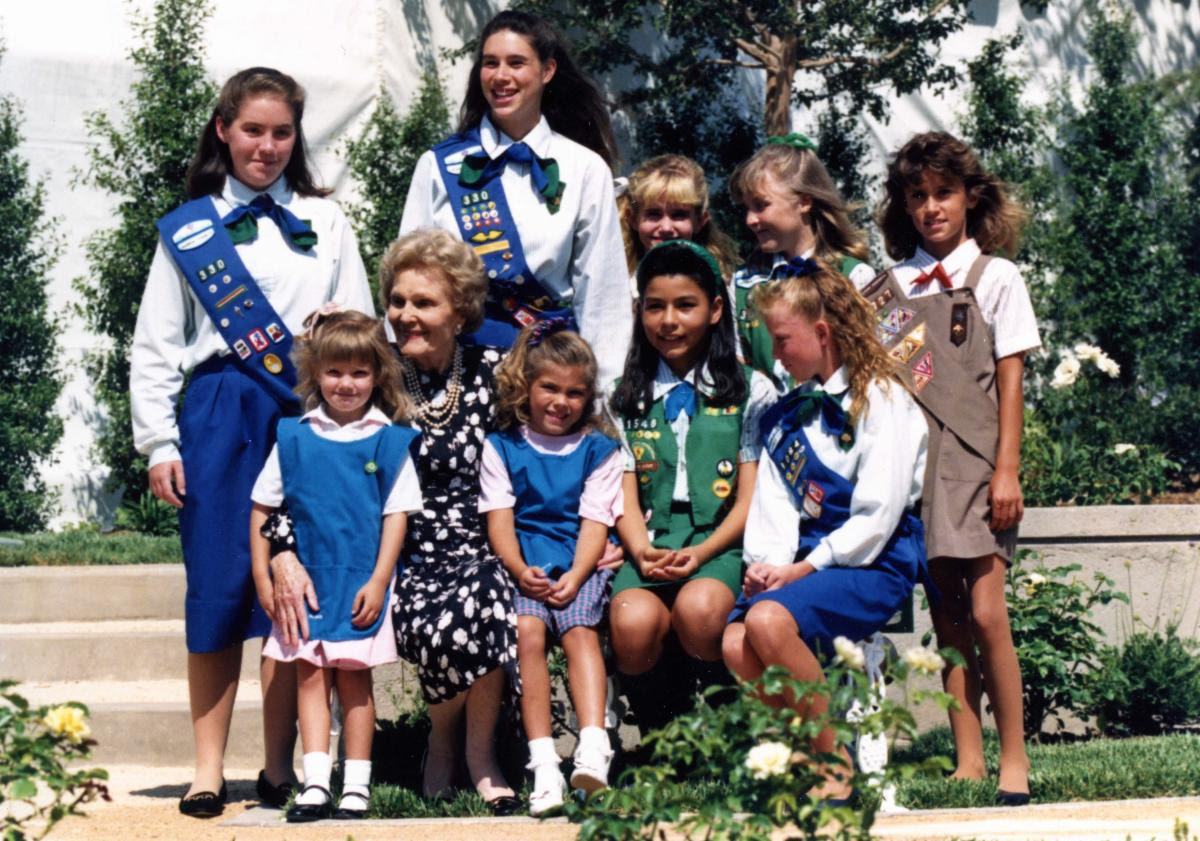 Pat Nixon sitting in her garden with a local Girl Scout troop in Yorba Linda, California, 1990. Courtesy of the Nixon Foundation.

Almost 50 years ago, Pat Nixon opened the gates of the White House and welcomed the public in to see the majesty and revel in the history of our nation. Two decades later and on the opposite coast, she did the same when hosting a group of local girl scouts during the opening of her namesake garden in Yorba Linda, California. The White House spring garden tour information can be found on the National Park Service and White House websites. The Nixon Library and Museum gardens are open Thursday through Saturday from 10 am-5 pm and Sundays from 11 am-5 pm. We welcome you to enjoy the flourishing beauty and history of the grounds.