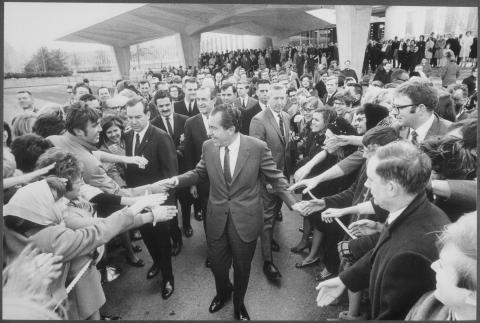 This page contains links to useful research resources that help to provide context to our collections.

Links to Learning is a list of websites listed below have researched Nixon Library collections to develop their product.

Medal of Honor Ceremonies contains the dates, names, and (when available) photographs, transcripts, and audio recordings of the ceremonies held during the Nixon Presidency.

Audio Gallery features assorted audio recordings from our audiovisual holdings. Some are public gifts, i.e., donations to President Nixon from members of the general public. Other sound recordings were produced by government agencies during the Nixon administration.

White House Tapes learn about the history of the taping system, download the finding aid, and listen to tape conversations.

Officials of the Nixon Administration is a list, by year, of the names and titles of the Executive Office of the President.

Research Bibliography is a non-exhaustive list including books, articles, and dissertations about Richard Nixon, his administration, and major issues during his Presidency. The list is arranged by categories such as Biographies, China, Labor, and Welfare.

Public Papers of the President are available through the University of California, Santa Barbara's American Presidency Project website.

Pentagon Papers are accessible through the National Archives and Records Administration's archives.gov website.

Watergate Trial Records Digitized A new website serves as a portal to browse the newly digitized records as the country marks the 50th anniversary of the break-in on June 17, 1972.

Vice President Nixon and Fidel Castro met in Washington, DC in the spring of 1959. Read or download a summary of their conversation here.

In addition, please refer to the Guide to Holdings, Research FAQs, or contact us for more information.