Effective Thursday, June 24, 2021, we are delighted to announce the Museum is open seven days a week.

The well-being of our visitors and staff is our top priority, and we have adjusted our visitor experience to meet current health and safety guidelines. Please click HERE to learn more about visiting us!

Watch the Richard Nixon Foundation's "A Look Inside the Nixon Library" 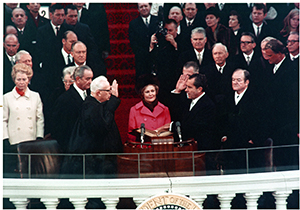 The presidential museum features 22 unique spaces that incorporate multimedia and interactive technologies. Visitors begin their journey in the new Malek Theater and enjoy a 13-minute orientation film before entering the permanent galleries in the “Wave of Change” gallery, which covers a period of great upheaval throughout the 1960s and during the months leading up to the November 1968 presidential election. Travel through President Nixon's presidency and resignation and return to his origins in the “Back to the Beginning” gallery. From there, travel through Nixon’s life and his extraordinary accomplishments prior to becoming the 37th President of the United States. The journey ends with Richard Nixon’s post-presidency period and his contributions as elder statesman, his impact on American culture, a solemn remembrance of Mr. and Mrs. Nixon’s memorial services, and the short “Epilogue” film at the conclusion of the exhibit.