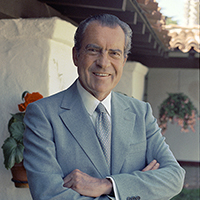 Born on January 9, 1913, on his parents' citrus farm in Yorba, Linda, California, Richard Milhous Nixon's life spanned eight decades. Follow the links below to learn more about the events in Nixon's life.

The following list illustrates the wide range of social, cultural, and political events that occurred during the years of Richard Nixon's life (1913-1994).

In many cases, the source cited is the Public Papers of the Presidents:   Richard Nixon.

The Public Papers of the Presidents volumes are available in print at many public or university libraries and on the following websites: