The Nixon and Disney Newsletter - PART 3!

Due to the Coronavirus Pandemic, the Richard Nixon Presidential Library and Museum closed on March 13, 2020 until further notice. The Education and Public Programs Team at the Nixon Library is pleased to remind you that the National Archives and Records Administration (NARA) continues to be an excellent source for entertaining and historical content! Simply follow the links below for additional information: 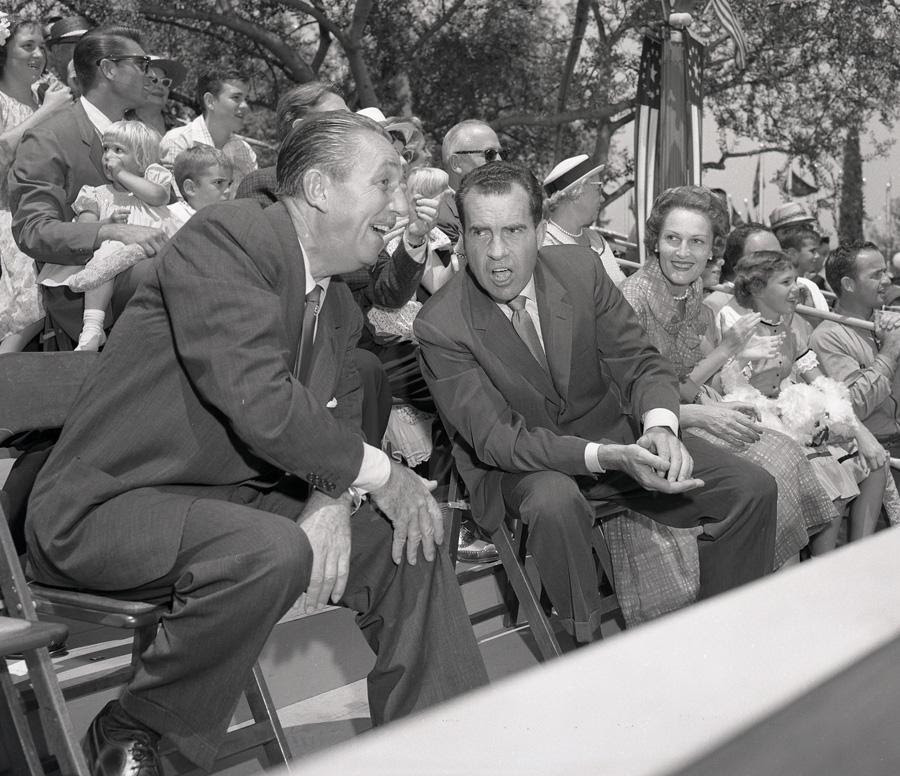 Two men born coasts apart started from humble beginnings and followed their dreams to great success. They were bonded through their peripatetic childhoods and mutual love of Americana. It was this love of America and its democracy that motivated both men to seek out foreign partners, celebrate the differences in cultures, and expand globally. This partnership spanned many decades and encompassed the rise, fall, and resurgence of one of the most enigmatic Presidents in history.

"The greatest honor history can bestow is the title of Peacemaker." -Richard Nixon

Many of President Nixon's greatest accomplishments were tied to his foreign policy.  His policy of détente or a relaxing of tensions with America's two greatest adversaries (Russia and China) during the Cold War ushered in an era of de-escalation. His foreign policy also extended to welcoming and hosting his allies on American soil. The President was unable to visit Disneyland during his presidency but many of his staff and foreign dignitaries visited while he was in office. 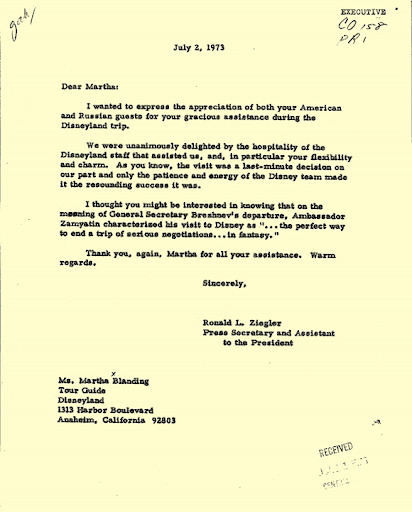 One of the dozens of thank you letters from White House Staff to Disneyland Cast Members. This specific letter of thanks is from Press Secretary Ron Ziegler to Tour Guide Martha Blanding, addressing Russian Ambassador and Diplomat Leonid Zamyatin's visit to Disneyland the summer of 1973. 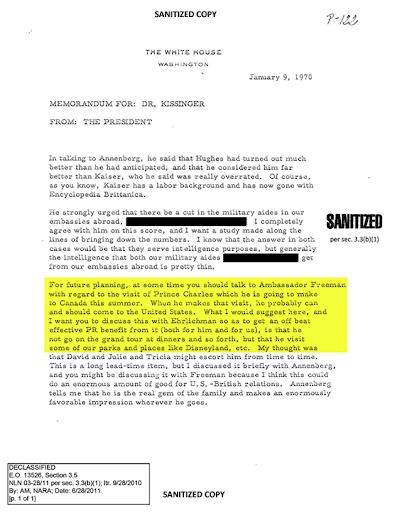 A memo dated January 9, 1970, from President Nixon to Secretary of State Henry Kissinger suggesting the use of Disneyland in diplomacy. The memo addresses a visit by British Ambassador John Horace Freeman and Prince Charles to North America.

Kissinger and his children were frequent visitors to the park and he was later hired by Disney to assist in a major lobbying effort to build a Disneyland park in Shanghai, China. 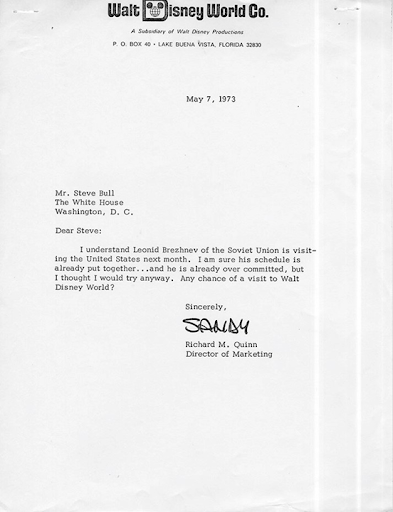 This letter was written by Walt Disney World Director of Marketing, Sandy Quinn, to Special Assistant to the President, Stephen Bull, in the hopes of landing foreign visitors. Quinn was part of Richard Nixon's California gubernatorial bid in 1962 and has been actively involved with the Nixon Library and Birthplace since 1990.

Mouseketeers in the White House 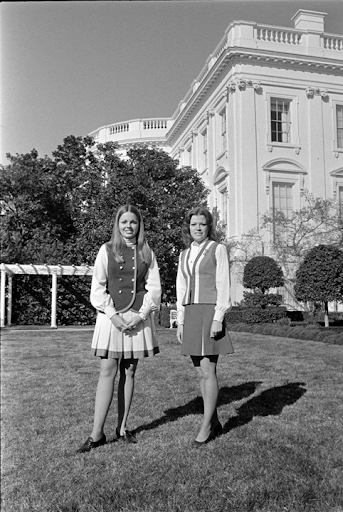 February 1974 photo shows the 1974 Ambassadors from Walt Disney World and Disneyland in front of the White House. WHPO-E2300-04A

Stemming from the humble beginnings both men were born into, a strong work ethic and loyalty were prioritized and instilled into the people surrounding them. Many of the key players surrounding Richard Nixon's administration worked for the Disney corporation before or after his presidency. 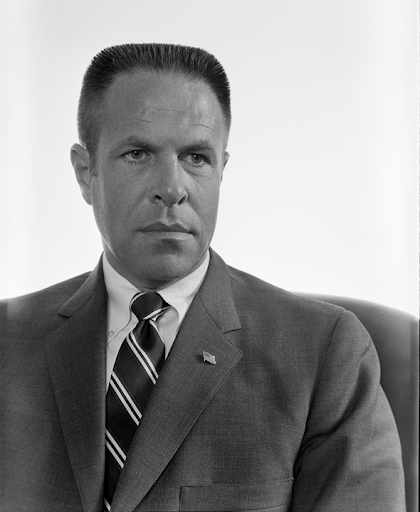 H.R. "Bob" Haldeman was Nixon's Chief of Staff 1969-1973. His political work began as an advance man on Nixon's presidential campaign in 1960 and his gubernatorial bid in 1962. He was elected the first chairman of the board of California Institute of the Arts, an art university which Walt and Roy Disney helped create in 1967. Before his federal appointment, he had charge of the Disney account while working for the J. Walter Thompson advertising agency. 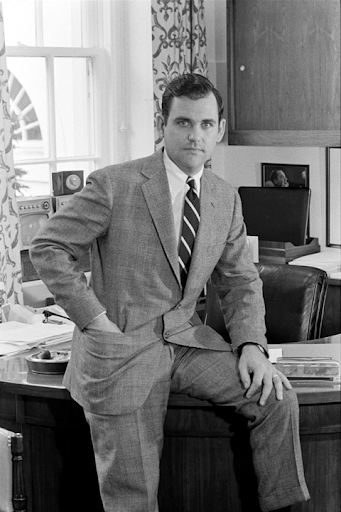 While in college, Ronald Ziegler worked for Disneyland during the summers as a Jungle Cruise operator. After graduation, he worked on Nixon's 1962 gubernatorial campaign as a press aide and then for H.R. Haldeman at the J. Walter Thompson advertising agency. He was White House Press Secretary 1969-1974. 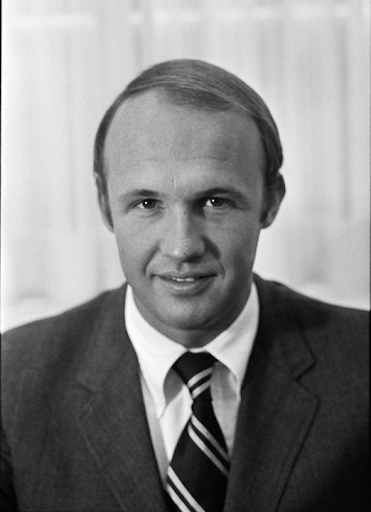 Lawrence Higby served as assistant to the White House Chief of Staff, H.R. Haldeman, during the Nixon Administration. Both he and his wife worked for Disneyland in 1965; he was a Jungle Cruise operator and she was a Tour Guide. In his retirement, he served as Chairman of the Board for the Segerstrom Center for the Arts 2011-2015. 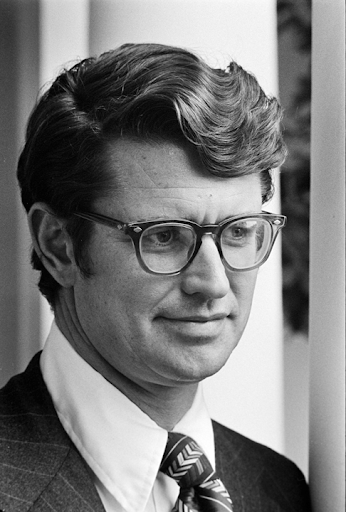 Tim Elbourne, a college roommate of Press Secretary Ron Ziegler, worked as an advance man for the Nixon administration from 1969 until 1973 when he left to become President of the Walt Disney Travel Co. His work for Disney predates the White House when he worked as a special assistant at Retlaw, the Disney family company. After leaving the administration, he continued to assist with the President's international trips. 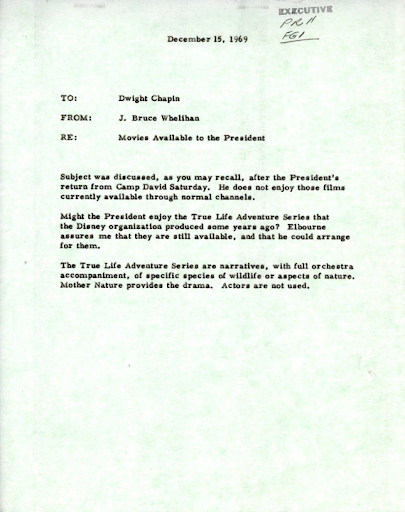 Richard Nixon was a true cinephile how saw many movies as President, but he wasn't always happy with "normal channels." This memo from Staff Assistant J. Bruce Whelihan to Dwight Chapin (another Disney alum connected through the J. Walter Thompson agency) demonstrates Disney connections at work. It suggests acquiring the Walt Disney nature documentary series, True-Life Adventures, through Retlaw-connected Tim Elbourne, but it did not come to fruition. 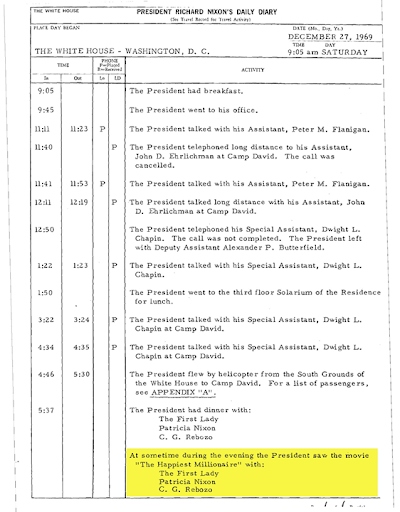 Although, it might explain why twelve days later Richard Nixon saw the Disney musical, The Happiest Millionaire, while at Camp David in December of 1969. The film was not released to the public on VHS until 1984.

Walt Disney passed away in December 1966, during the initial planning stages of a second park located in Florida. Following his death, the company was unsure whether to proceed with development. Roy Disney brought the project to fruition five years after Walt Disney's passing, and well into Nixon's first term as President, Walt Disney World officially opened on October 1, 1971. Lots of planning and preparation began for the President's possible visit, an advance survey trip was made to scout logistics that included construction photos of the park.  Planning began in spring 1971 and included delivering an American Flag to Walt Disney World. 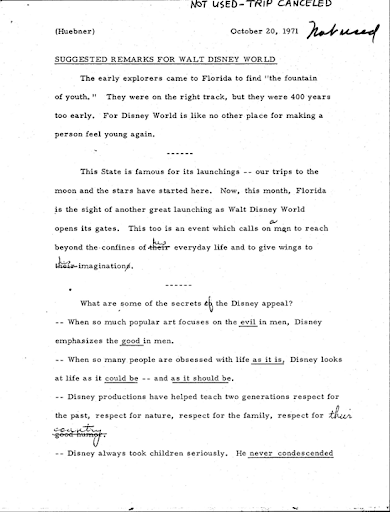 Once it was established that the President would be unable to attend, alternatives were discussed and H.R. Haldeman was chosen to represent and deliver the American flag. 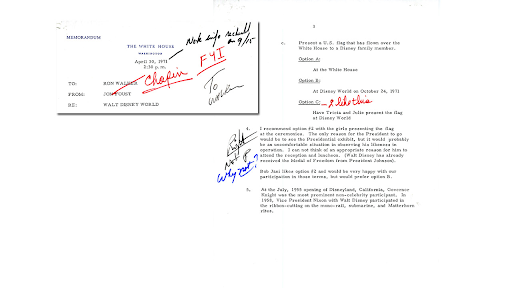 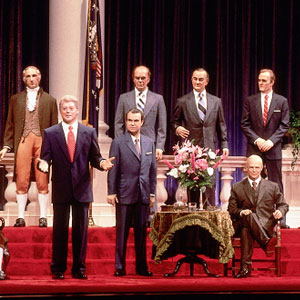 The Hall of Presidents

Walt Disney World is home to Liberty Square- a representation of colonial-era America that houses the Hall of Presidents, an animatronic show that traces America's history. Liberty Square planning began in 1957 as an extension of Disneyland, but after it was represented at the 1961 World's Fair, the completed project became a cornerstone of Walt Disney World. At the time the attraction opened in 1971, the roll call ended with Richard M. Nixon. Over time, each newly elected President would have an audio-animatronic version of himself added to the show in their likeness. 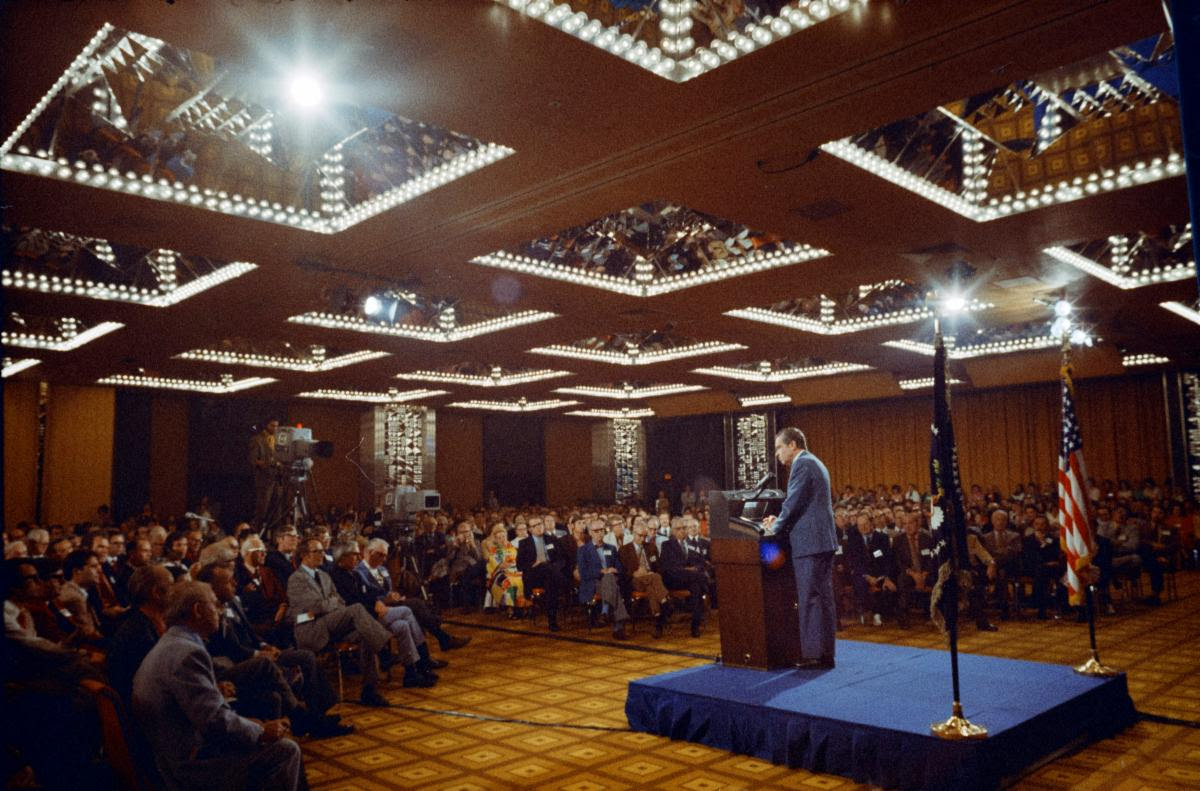 The Contemporary Resort is one of two original resorts located within Walt Disney World. On November 17, 1973, Richard Nixon faced and fielded questions from 400 managing editors of the Associated Press during their annual convention held at the Contemporary. Nixon responded to questions regarding his finances and welcomed the inquiries being made stating, "people have got to know whether or not their president is a crook. Well, I'm not a crook. I've earned everything I've got." He resigned from the presidency on August 8, 1974. 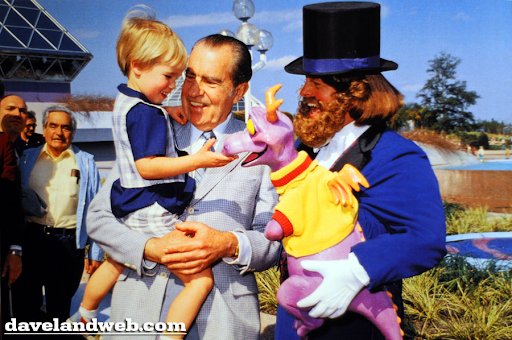 "Less than a decade after his resignation, Richard Nixon Nixon found himself advising on campaign strategy, foreign policy, and U.S-Soviet summit meetings. He even represented the U.S at state funerals. Serving informally during the Reagan, Bush, and Clinton Administrations, Nixon became a valued elder statesman." Post-presidency, the Nixon family visited Walt Disney World often and were frequently accompanied by their extended family and grandchildren. 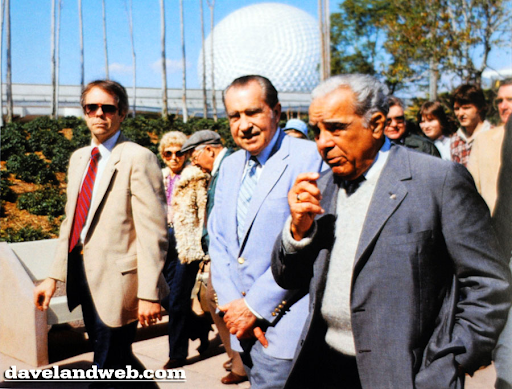 Richard Nixon passed away on April 22, 1994. He is buried at his Presidential Library in Yorba Linda, California, 15 miles from Disneyland and mere feet from the childhood home he was born in.

"Remember to always give your best. Never get discouraged. Never be petty. Always remember others may hate you. But those who hate you don't win unless you hate them. And then you destroy yourself." - Richard Nixon

Click HERE to see the previous installment of the Nixon/Disney Newsletter: Nixon and Disney: The Untold Story.