Richard M. Nixon is considered the foremost Disney Fan out of any U.S. President. As a native of Orange County, he still holds the record for the most visits to Disneyland by any U.S. President. The Nixon Library Education and Public Programs team, with the help of Jason Schultz, Supervisory Archivist, has developed a new email series that highlights the relationship between the Nixon and Disney families. Utilizing documents and artifacts from our vault as well as websites dedicated to the lore of the Park, please join us in our journey through history.

The Beginning of Something Magical

On August 11, 1955, Vice President Nixon visited Disneyland with his family. During this trip, Nixon received the key to Disneyland and also enjoyed many of the attractions. This included taking a trip on the Peter Pan Flight and the TWA Rocket to the Moon. 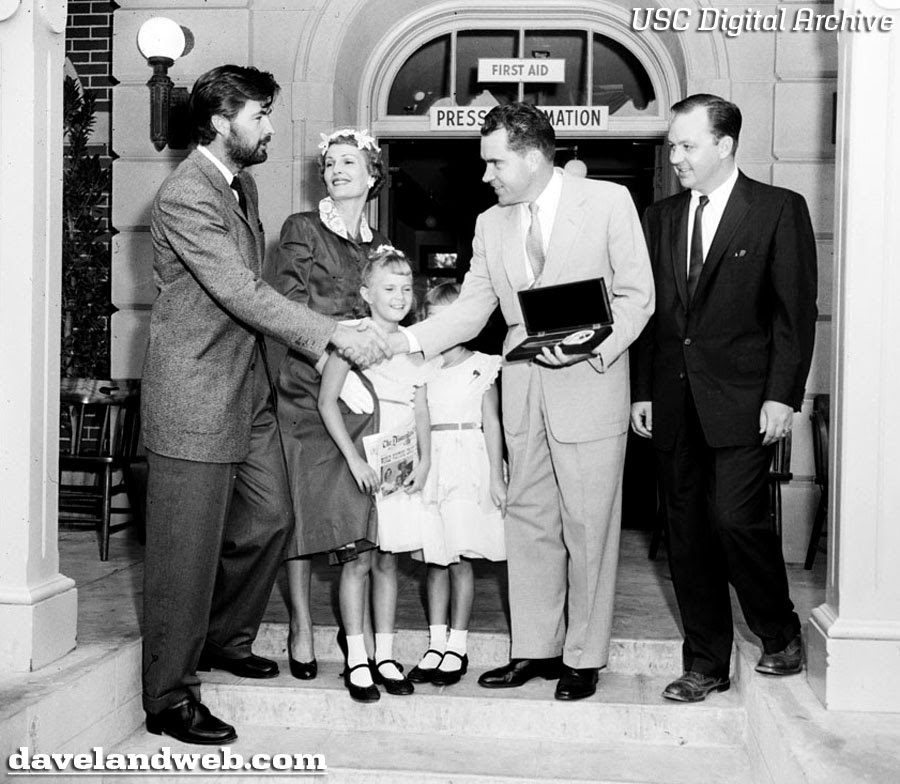 A close up of the key to Disneyland that Vice President Nixon received. It is now part of the collection at the Richard Nixon Presidential Library and Museum. 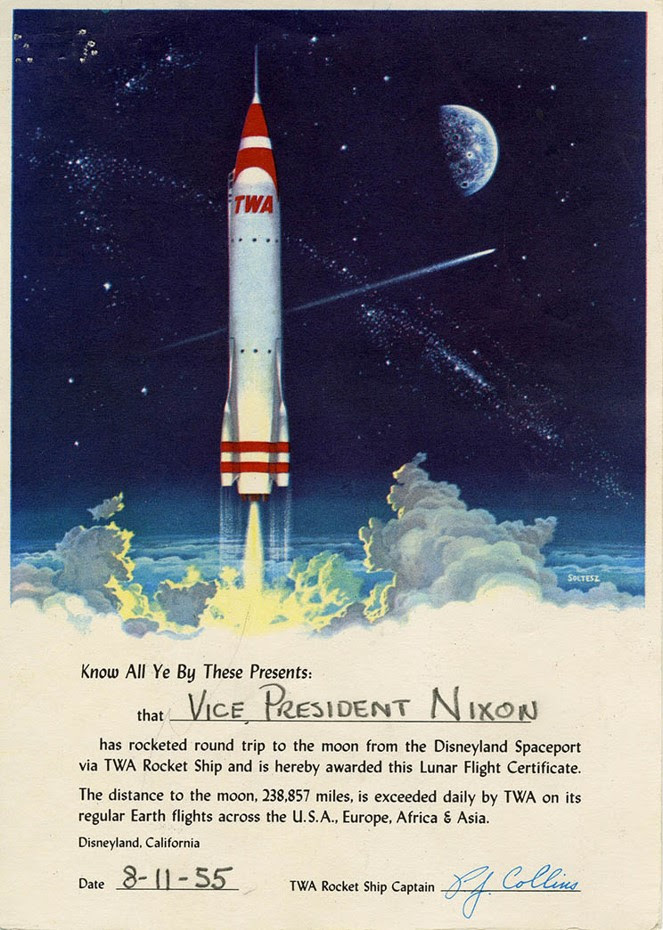 July 25, 1956, Walt Disney wrote to Vice President Richard Nixon inviting him to appear on the Mickey Mouse Club television show. Although Nixon was unable to participate due to scheduling conflicts, Nixon managed to squeeze in a visit to the Mouseketeers in 1958.

Walt Disney reaches out to the Vice President with a young reporters question: "When I Grow Up, Mr. Nixon, Why Should I Be a Republican?" Disney, Walt; box 217; Series 320; Richard Nixon Pre-Presidential Materials (Laguna Niguel).

June 14, 1959 was an exciting day for Walt Disney and Disneyland, marking the biggest expansion of Disneyland since it opened. Over 2000 members of the press, celebrities and dignitaries attended, including Vice President Richard Nixon, his wife, Pat, and their daughters, Tricia and Julie. 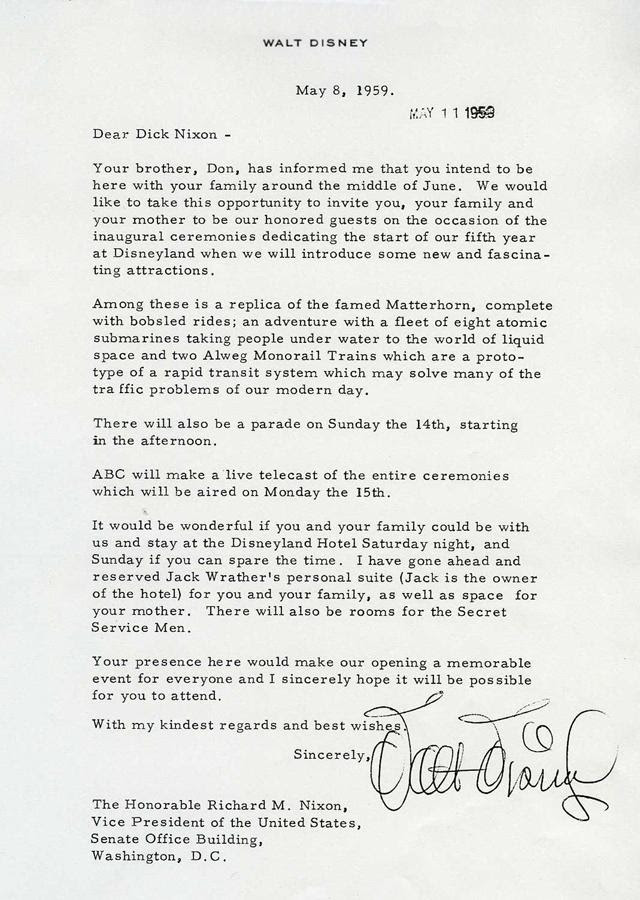 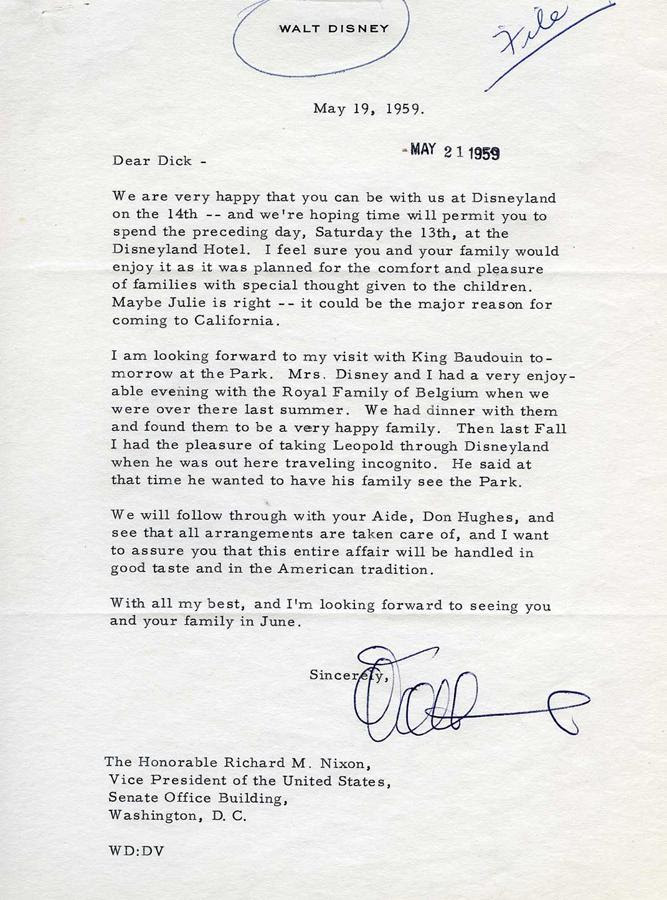 Letters from the Walt Disney Company to the Vice President finalizing the plans for his visit.

The Vice President and his family had a busy itinerary that began with a morning dedication of the Monorail with Art Linkletter. An afternoon parade attended by the extended Disney family, actress Hayley Mills, and composer Meredith Willson, the visionary behind the musical "The Music Man". The trip culminated in a second Monorail dedication in the late afternoon. You can learn more about the Nixon family's visit including a personal account of the trip from Julie Nixon Eisenhower linked  here. 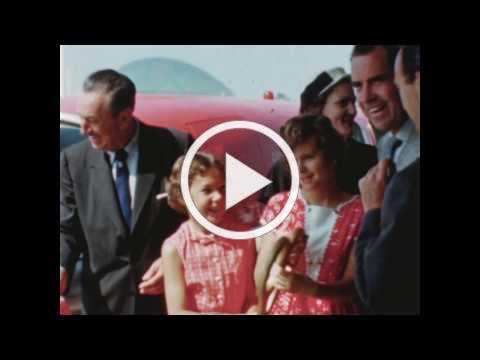 Home Video of the 1959 Disneyland visit.

Walt Disney posing with the Nixon Family in the monorail and Art Linkletter in the bubbletop during the morning monorail dedication.

During the official afternoon dedication of the Monorail, the large wooden scissors that Tricia and Julie Nixon used during the ceremony were more decorative than functional. In the video you can see Walt Disney assist in the ribbon-cutting. 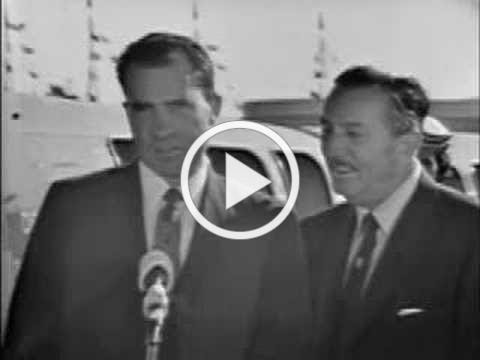 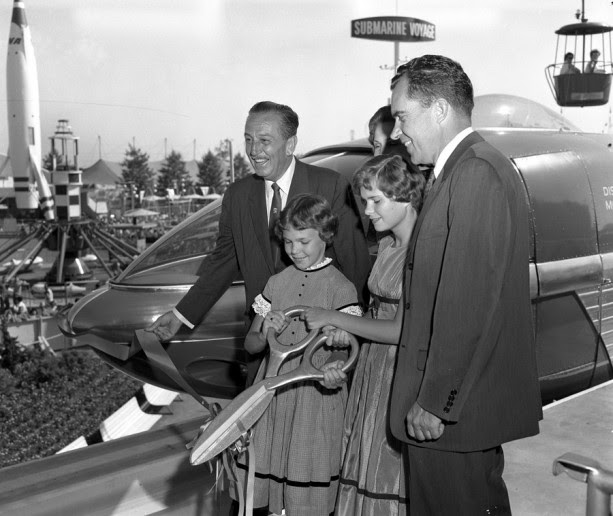 Read the oral history of Imagineer Bob Gurr, Captain of the Monorail during the inaugural ride with Vice President Nixon and family.

With over 54,000 miles traveled and 4,500,000 passengers served, Disneyland expanded the monorail train system to encompass the Disneyland Hotel. The attached letter expressed the hope that the Nixon family could once again be there to celebrate the opening. They even promised sharp scissors for the ribbon-cutting. Unfortunately the Vice President's travel schedule wouldn't allow it. 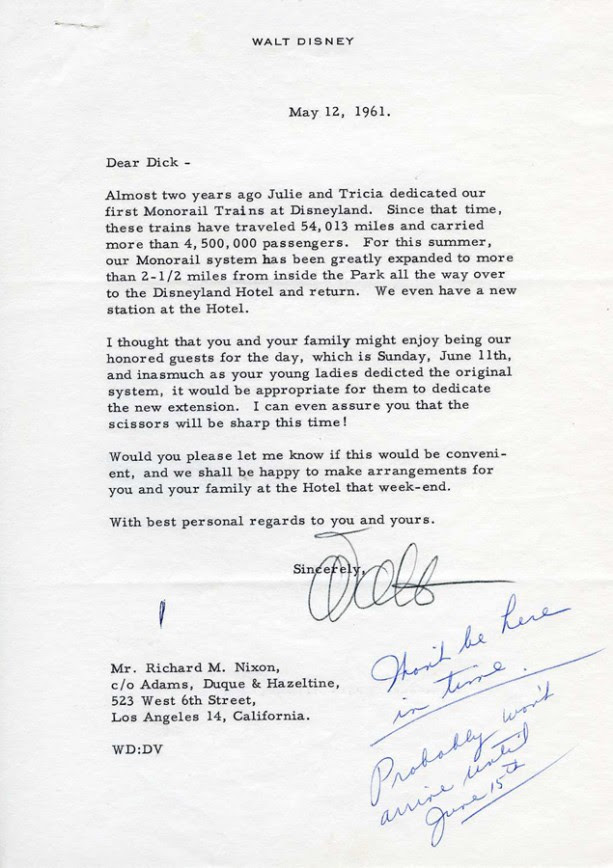 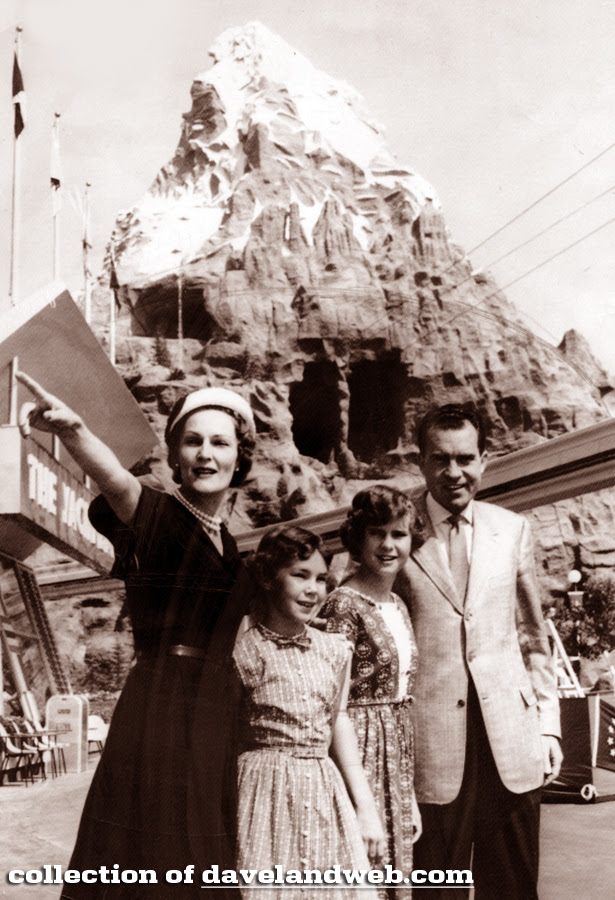 On the 55th anniversary of the ribbon-cutting Tricia and Julie sent a message exclusively to Mouseketeers:

"We are pleased and excited to join Disney fans around the world in celebrating the 55th anniversary of the iconic Disneyland Monorail. When we cut the ribbon and took the very first Monorail ride on June 14, 1959, we could not have imagined what a popular icon it would become. For over five decades, it has provided countless families that special Disney experience - just as it did ours.

"Our family visited Disneyland as often as we could. It was then - as it is now - truly the 'happiest place on earth,' thanks to the visionary Walt Disney. Our parents cherished Walt's years of friendship, not to mention his warmth, creativity and contagious sense of humor. He was, on that warm June day, charming as ever. His excitement for life has inspired millions across the globe.

"We send our best wishes on this special day of celebration. Congratulations to Disneyland, and may it continue to inspire joy and hope, as it has done for us for nearly 60 years."