The Nixon and Disney Newsletter - PART 2!

Nixon and Disney: The Untold Story 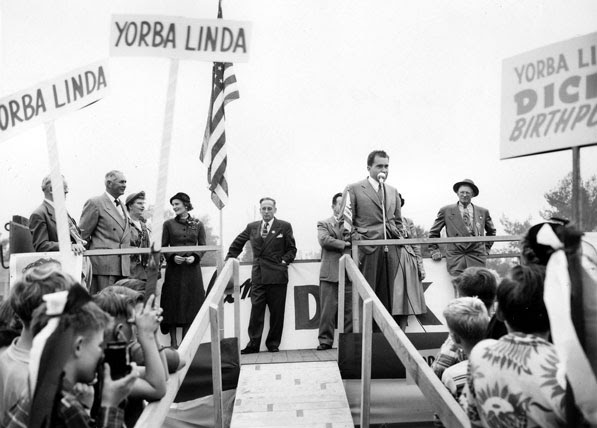 Nixon returns to his hometown of Yorba Linda in 1952 to campaign for the Republican ticket. Courtesy of the Orange County Archives.

The Nixon family visited Disneyland several times before moving into the White House. Thirteen years after his first visit in 1955, the Republican presidential nominee and his family made an evening visit in August of 1968. His schedule included the People Mover, Disneyland Railroad, Pirates of the Caribbean, and "it's a small world." 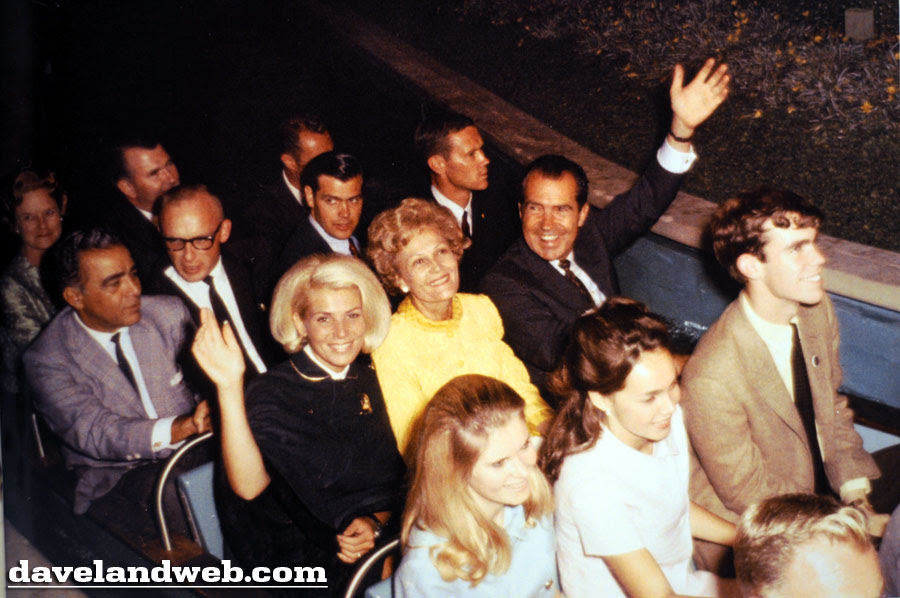 it's a small world

With only limited time at the park, Pat specially requested they go on "it's a small world", her favorite ride. For more details about the visit and personal insight from Julie Nixon Eisenhower, click here. 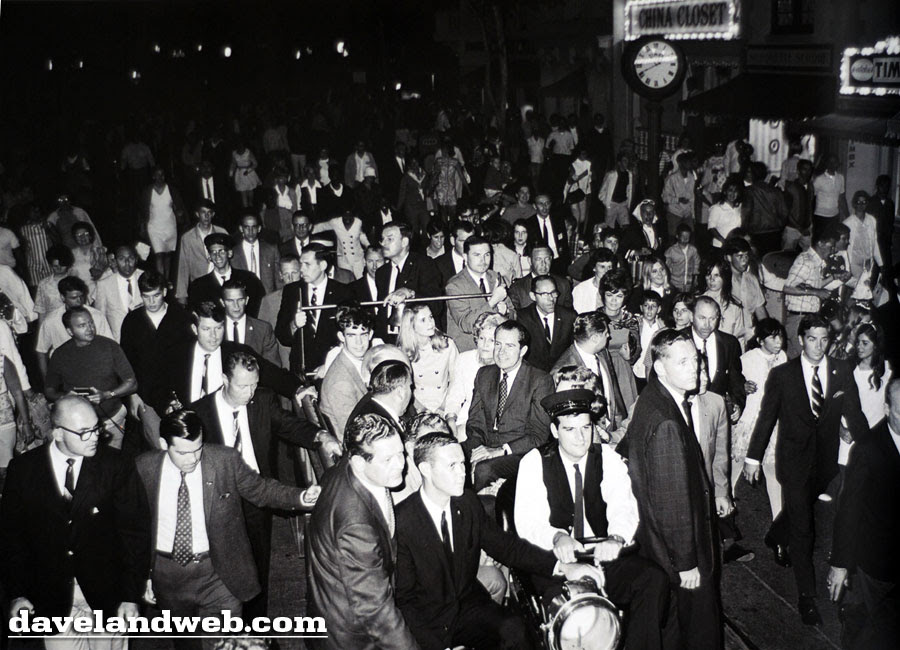 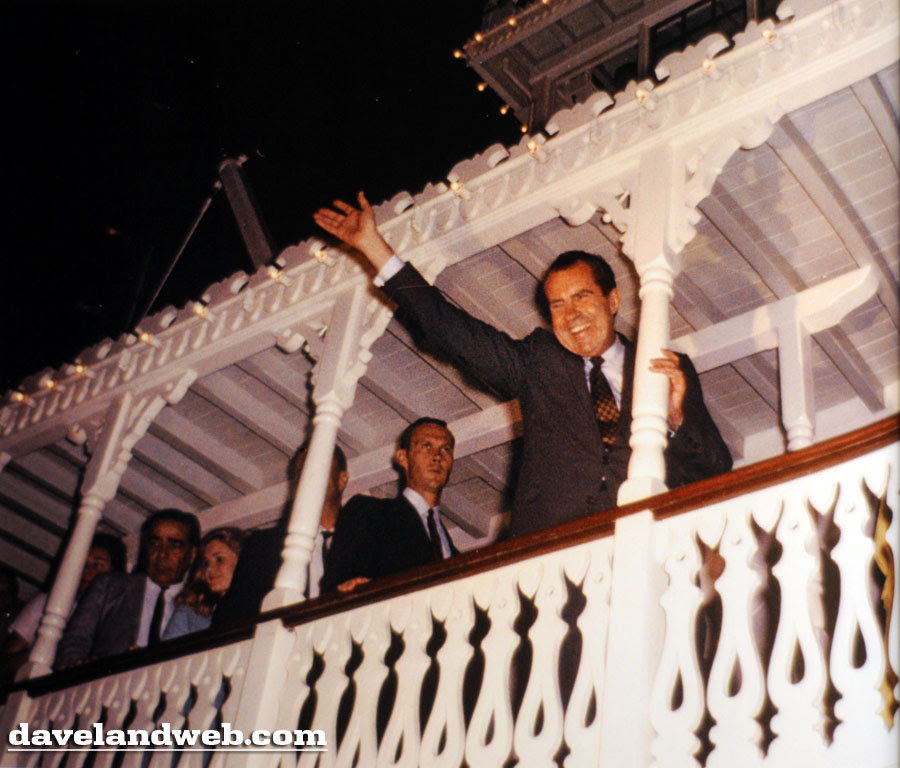 Public Law 90-316-- to provide for the issuance of a gold medal to the widow of the late Walt Disney and for the issuance of bronze medals to the California Institute of the Arts in recognition of the distinguished public service and the outstanding contributions of Walt Disney to the United States and to the world. Walt Disney. Commemorative medal. Duplicate copies, limitation.

"Whereas Walt Disney's life personified the American dream and his rags-to-riches story demonstrated that the United States of America remains the land of opportunity; and

Whereas Walt Disney, "the most significant figure in graphic arts since Leonardo," pioneered motion picture cartoons, produced spectacular feature films, and created fascinating nature studies bringing joy and pleasure to children of all ages; and

Whereas Walt Disney developed one of the wonder of the modern world, Disneyland, a fabulous park where happiness reigns and where one can relive the Nation's past as well as step into the future; and

Whereas Walt Disney was a great humanitarian, a "teacher of human compassion and kindness," a master entrepreneur, a great conservationist; and

Whereas Walt Disney's masterful touch contributed so significantly to the success of exhibits of the United States, including those at the New York and Brussels World's Fairs; and

Whereas Walt Disney, always an outstanding patriot, during World War II devoted 95 per centum of the production of his studios to the armed services; and

Whereas Walt Disney's vision and work with the Coordinator of Inter-American Affairs did so much to create international friendship and mutual understanding with our neighbors in Latin America; and

Whereas Walt Disney received an unprecedented number of Academy Awards, citations, and honors from governments the world over, industry, civic groups, and universities, which when listed total nearly a thousand; and

Whereas Walt Disney's greatest gifts to mankind were laughter, his steadfast faith in future generations, and his belief that good will ultimately triumphs over evil; and

Whereas Walt Disney's interest in young America is evidenced by his founding of the California Institute of the Arts, a college-level school of the creative and performing arts, which he regarded as his most important contribution to posterity." 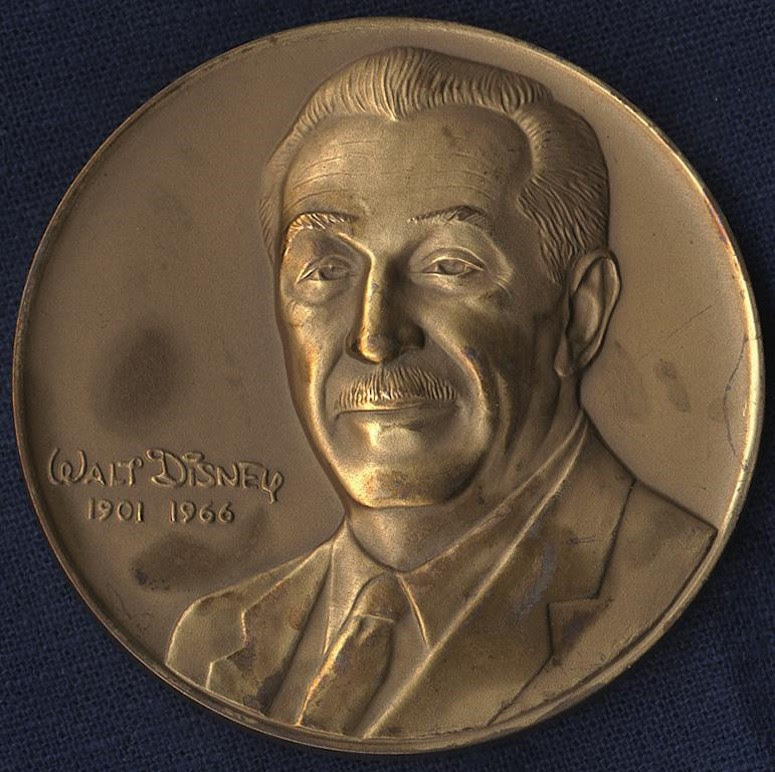 On March 25, 1969, President Nixon presented Lillian Disney with the Walt Disney Commemorative Medal. The gold medal was created by Blaine Gibson, a prominent sculptor and Disney animator. The U.S. Mint created 6,000 bronze replicas for CalArts, a program founded by Walt Disney that offers comprehensive degree programs across the full range of the visual, performing, media, and literary arts to sell. 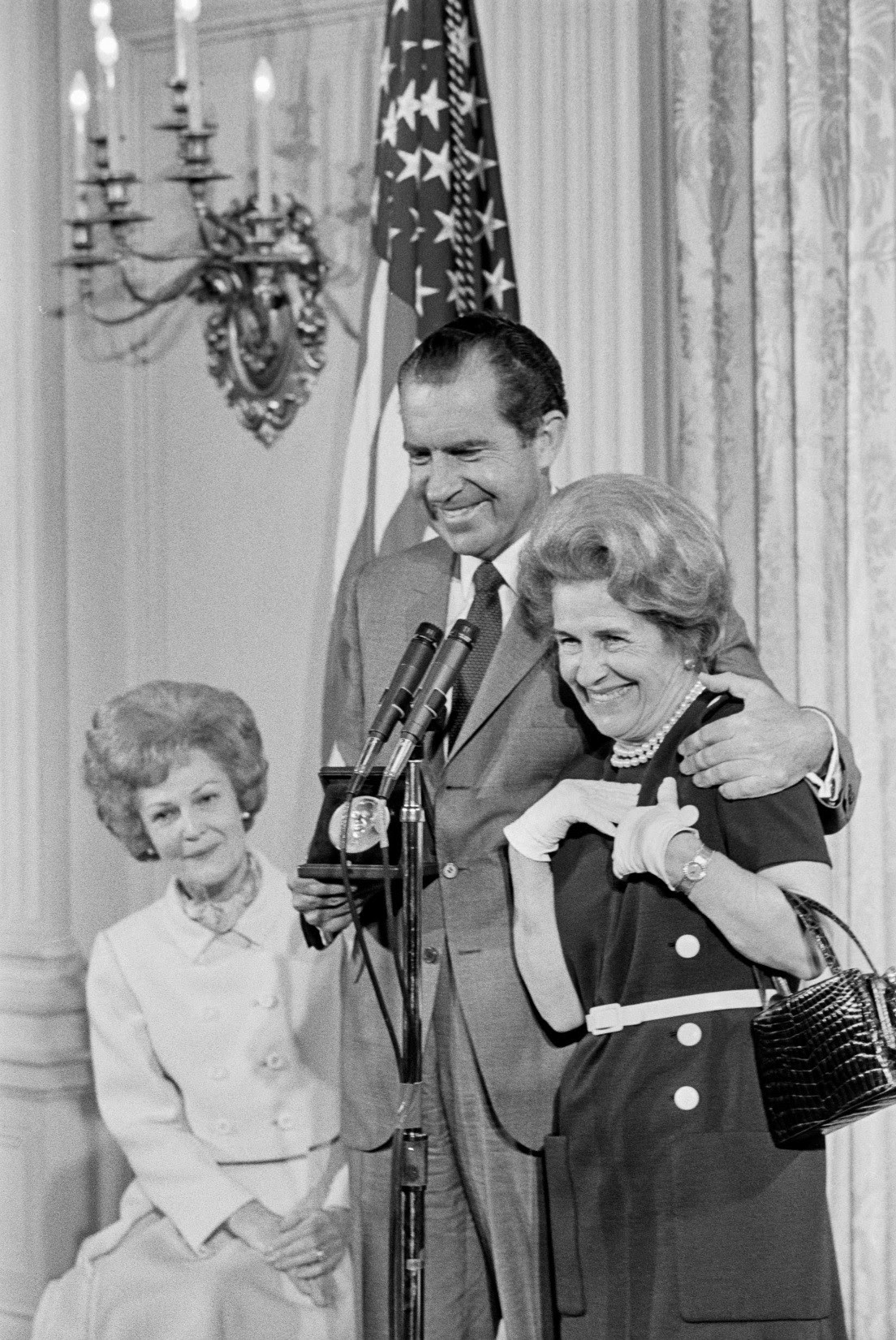 Lillian Disney receiving the gold medal with Pat Nixon in the background.

Known for his meticulous planning for events, down to the minute, President Nixon often had staff prepare suggested remarks which he would "mark up" by underlining and circling notes in the draft, incorporating the points he liked into his final remarks. 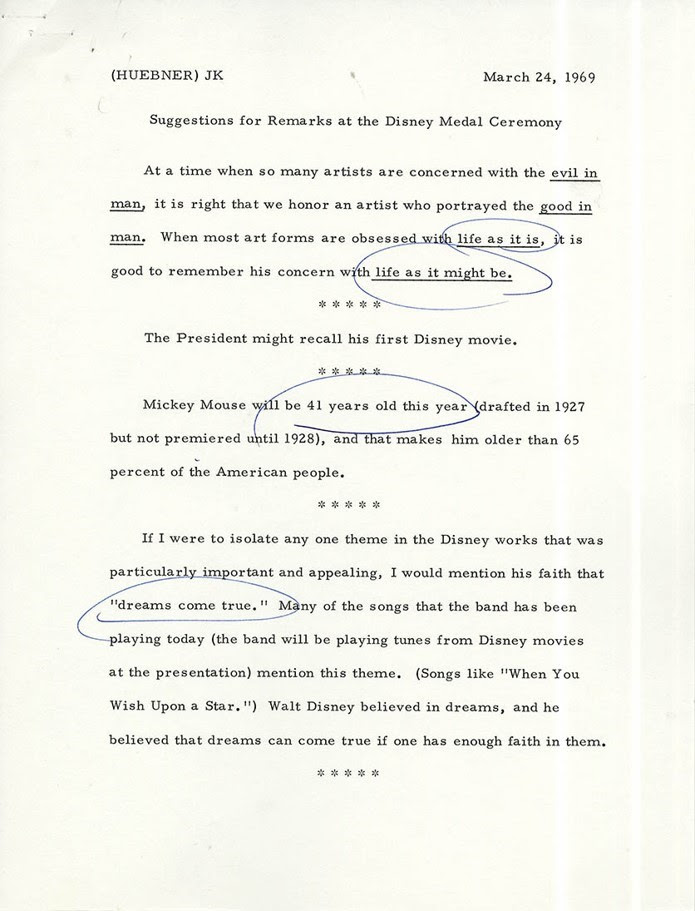 Before Nixon entered politics, he worked as a lawyer. Yellow legal pads were a staple in his administration. There are countless pages of notes written on yellow notepads in our holdings. 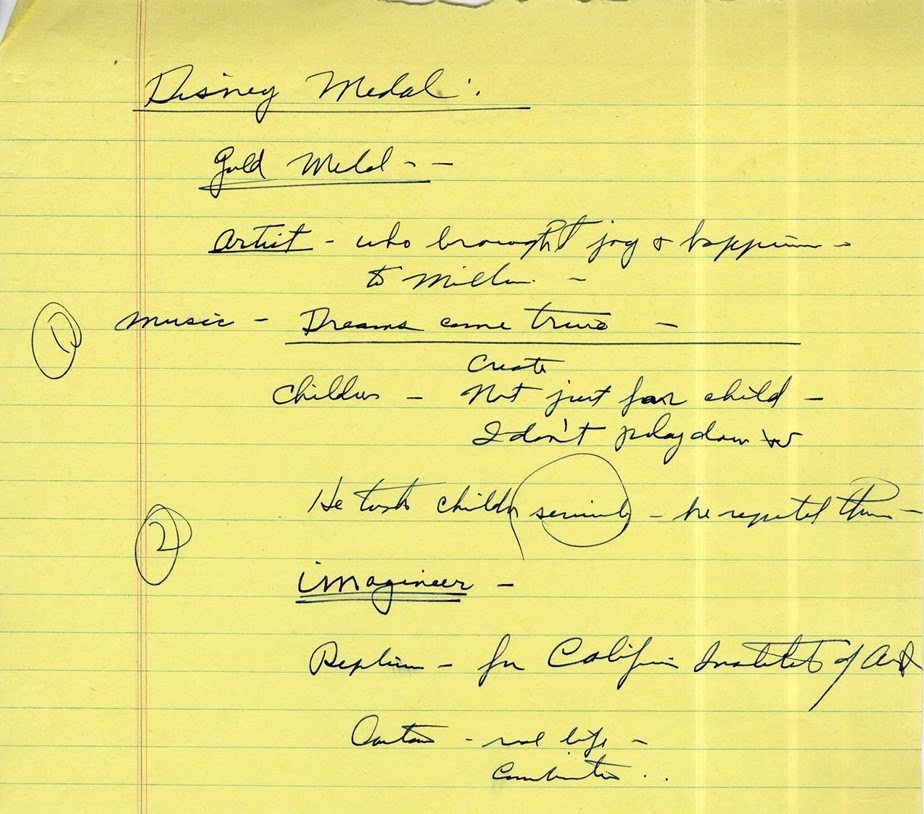 On August 9, 1969, President Nixon flew on Air Force One from the White House in Washington, D.C. to the Western White House in San Clemente, CA landing at the Orange County Airport. After landing, President Nixon was greeted with the Santa Ana High School Band and the Disneyland Band playing Hail to the Chief. During this warm homecoming reception, President Nixon gave a speech to the crowd touching on various topics including Apollo 11, a Supreme Court Justice nomination, and Disneyland.

"I want you to know, too, that I heard about the little debate that developed over whether or not this plane could land at the Orange County Airport. I have had to make quite a few decisions in the last few days. This was one of the toughest.

It was also during this speech that Nixon hinted at his decision to announce the next Supreme Court Justice nomination, Clement Furman Haynsworth Jr. As it turned out, Haynsworth failed to win confirmation and the vacancy was eventually unanimously confirmed in May 1970 for Judge Harry A Blackmun.

"I think you should know that one of the announcements we will be making this week will be the announcement of another Justice of the Supreme Court. There are only two people in the United States who know at this time who that man is going to be."

Even though President Nixon did not have time to visit Disneyland himself during his trip to California, he encouraged others to visit the Happiest Place on Earth.

"Here is Marry and Mrs. Mitchell.

The Disney family was involved in many of the presidential events during this trip to California including as guests to the Apollo 11 Astronaut Dinner. 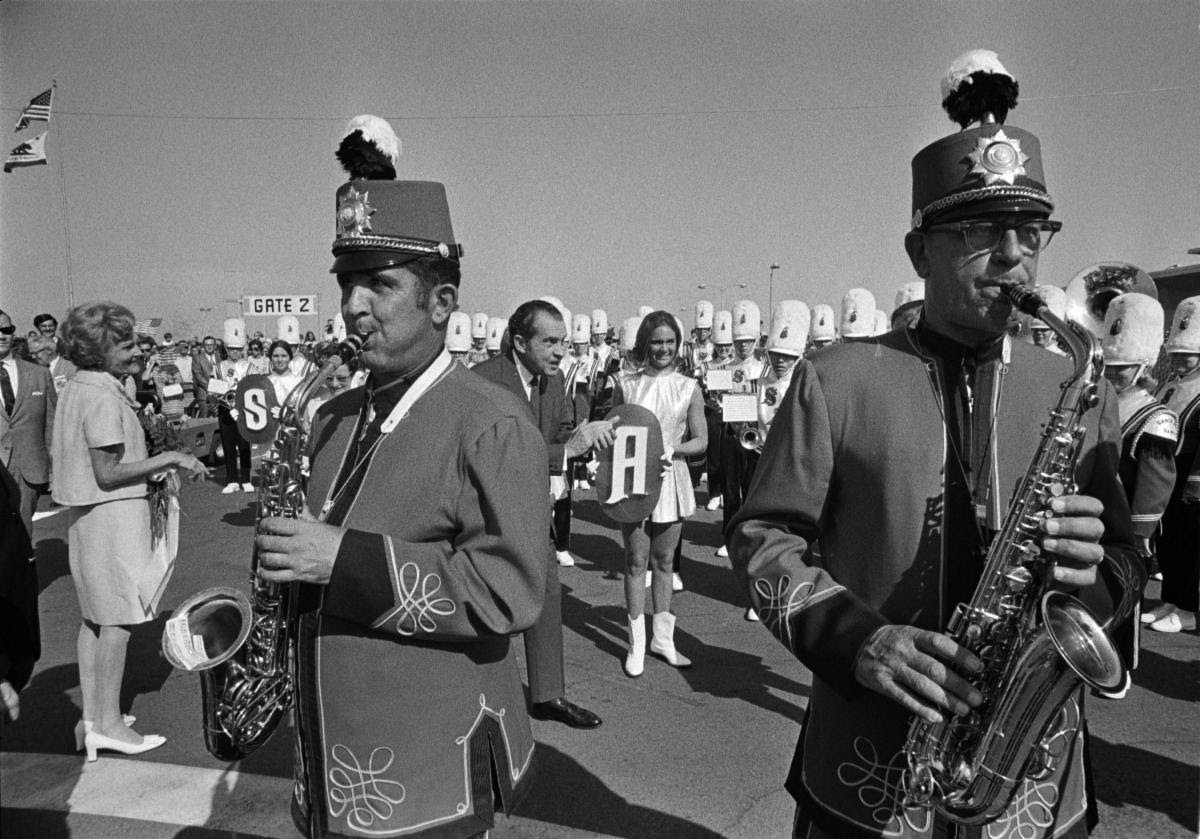 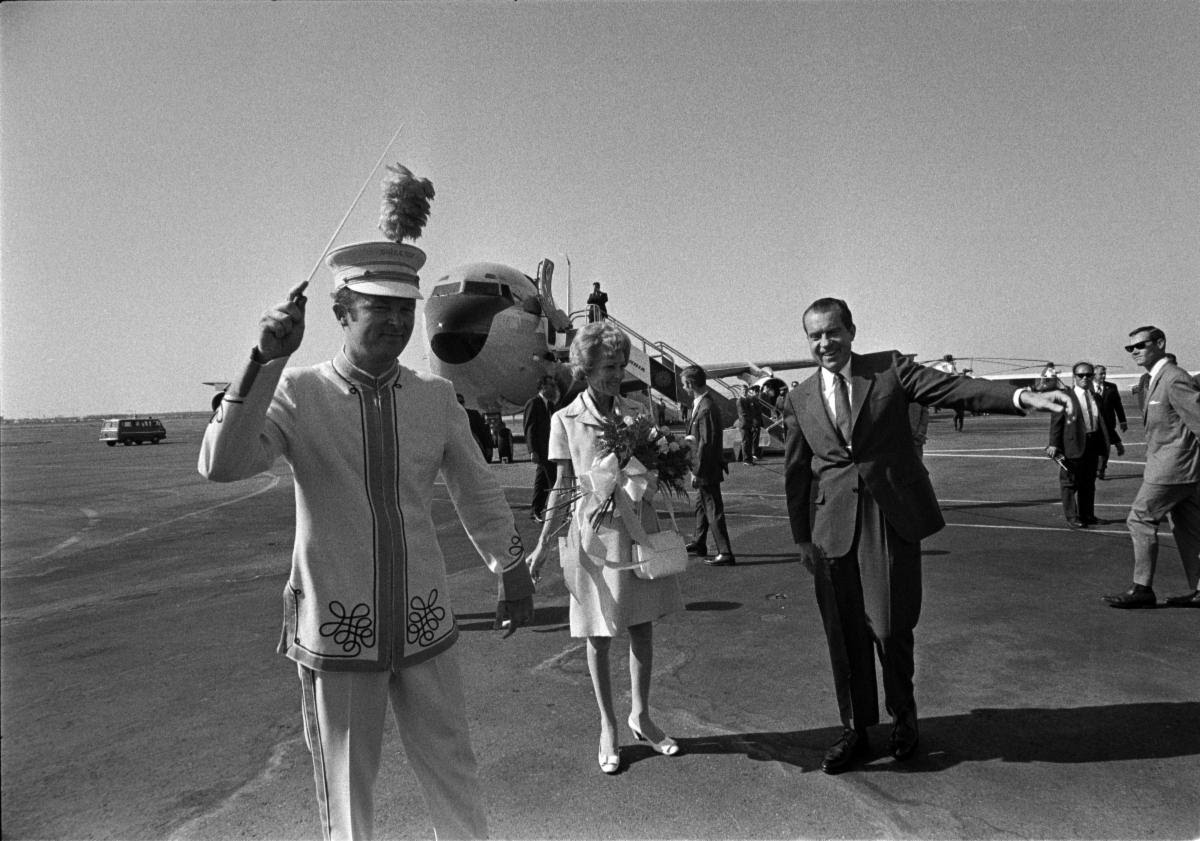 8/9/1969 Disneyland Band Director Jim Christensen with President and Mrs. Nixon and Air Force One in the background.  37-whpo-1817-08a 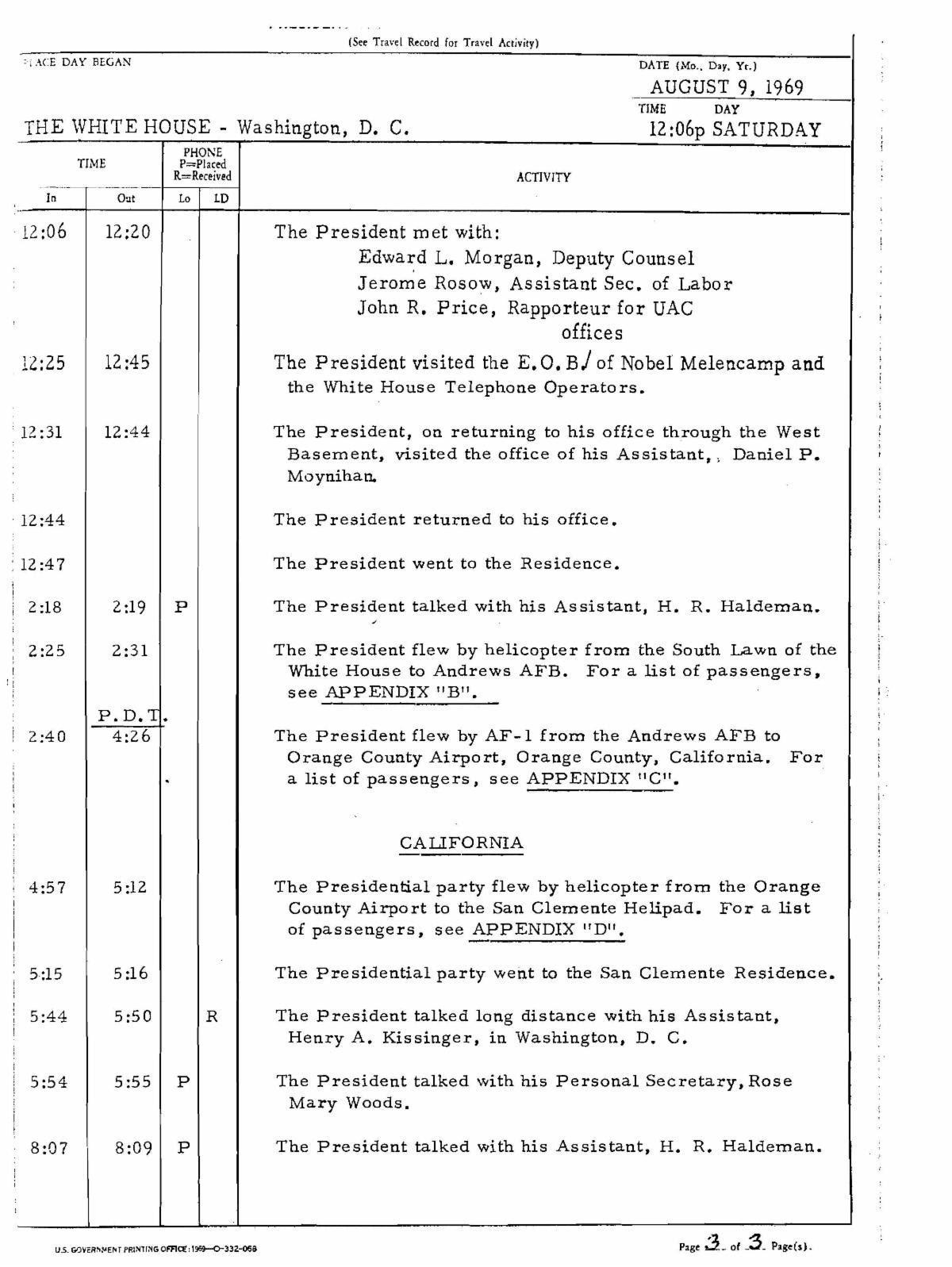 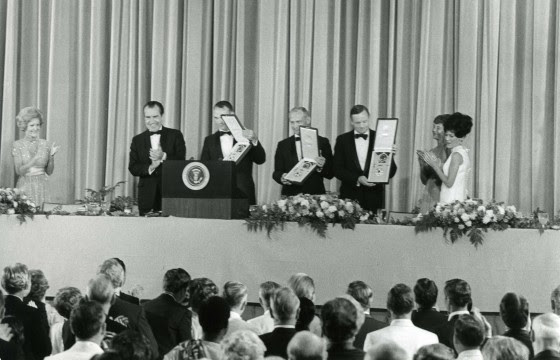 RN presented the astronauts with the Presidential Medal of Freedom

During President Nixon's August 1969 California trip, he hosted a dinner at the Century Plaza Hotel for the Astronauts of Apollo 11 and presented them with the Presidential Medal of Freedom. The Disney family was included on the invitation list to attend the special event. 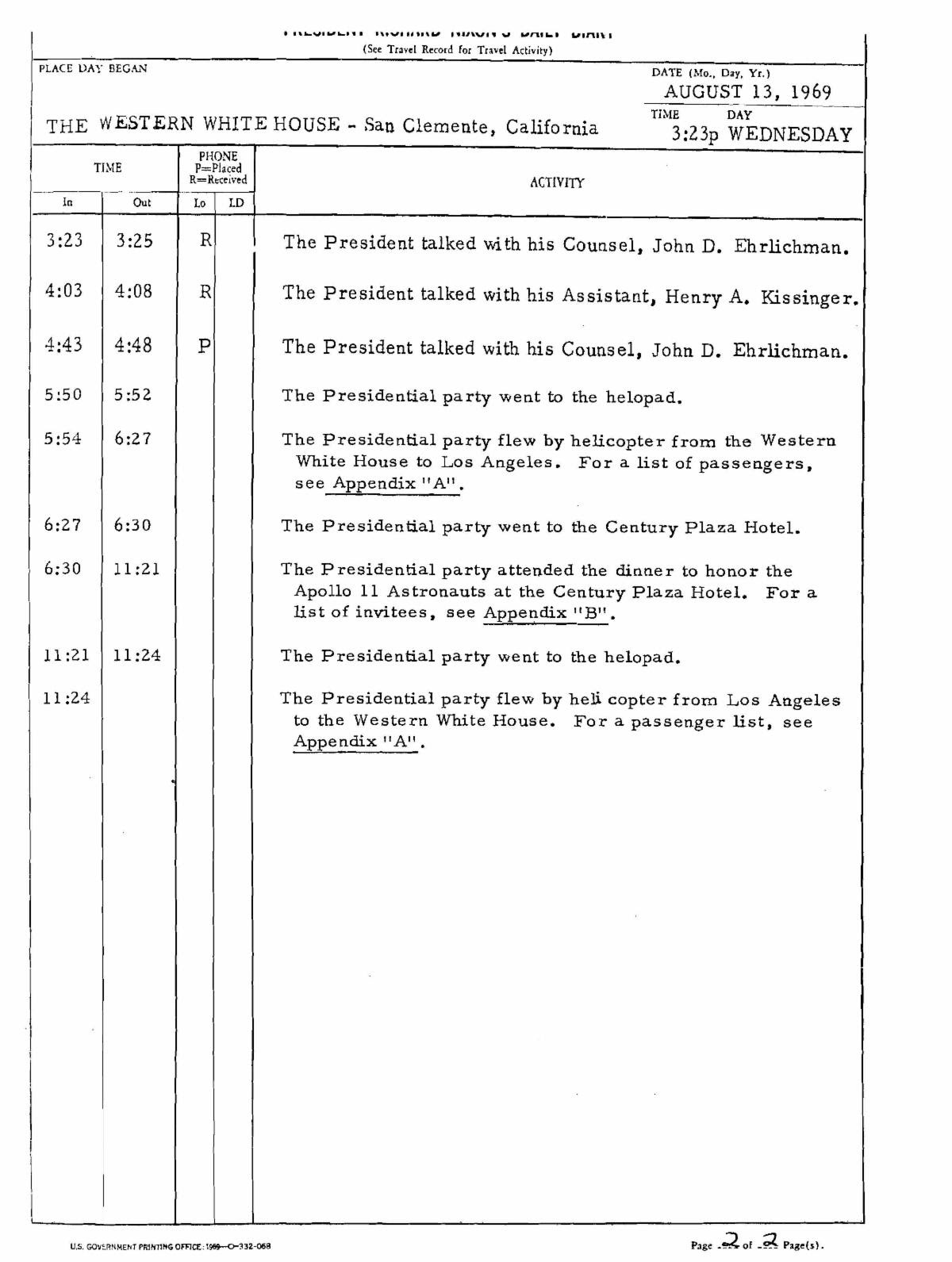 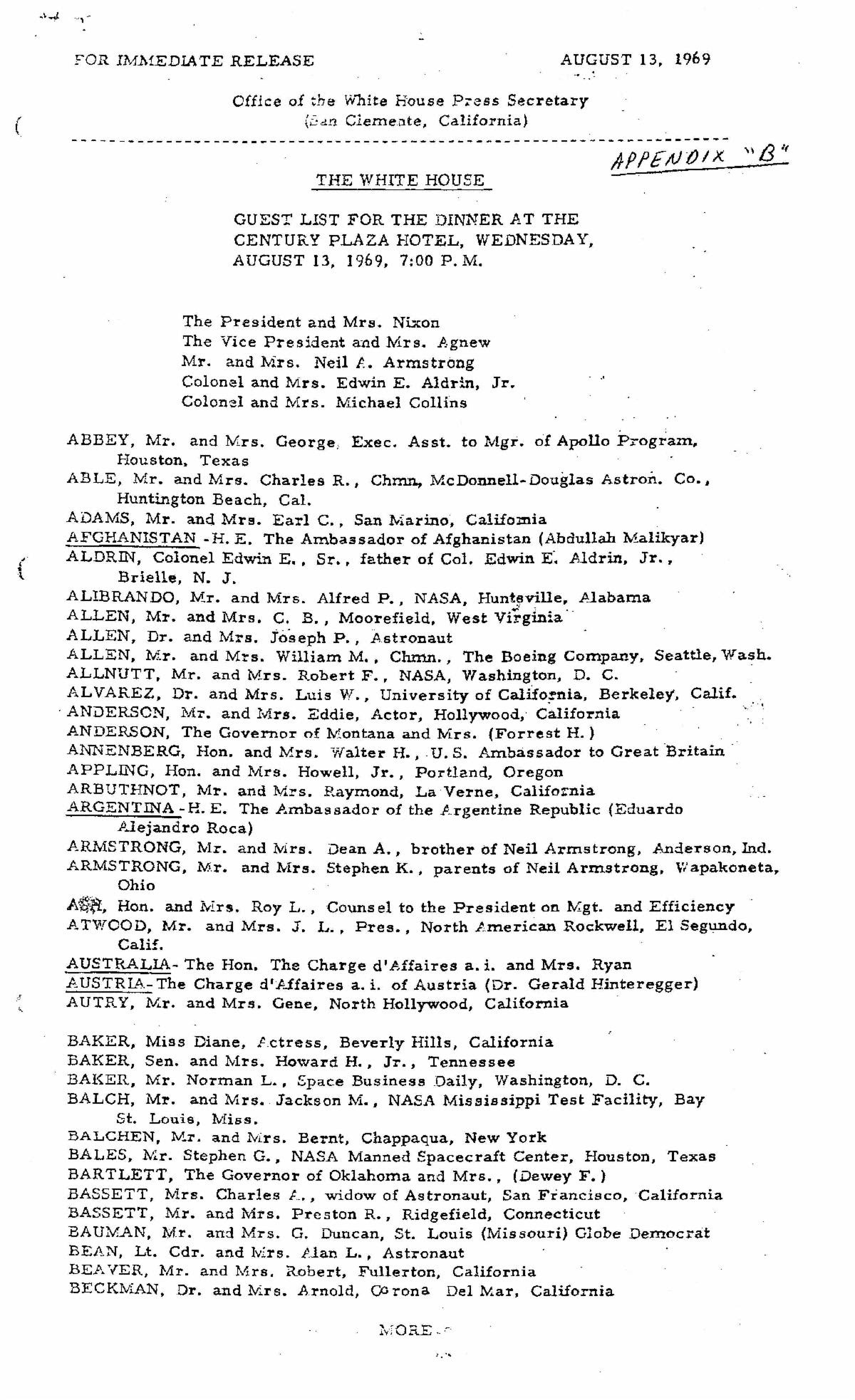 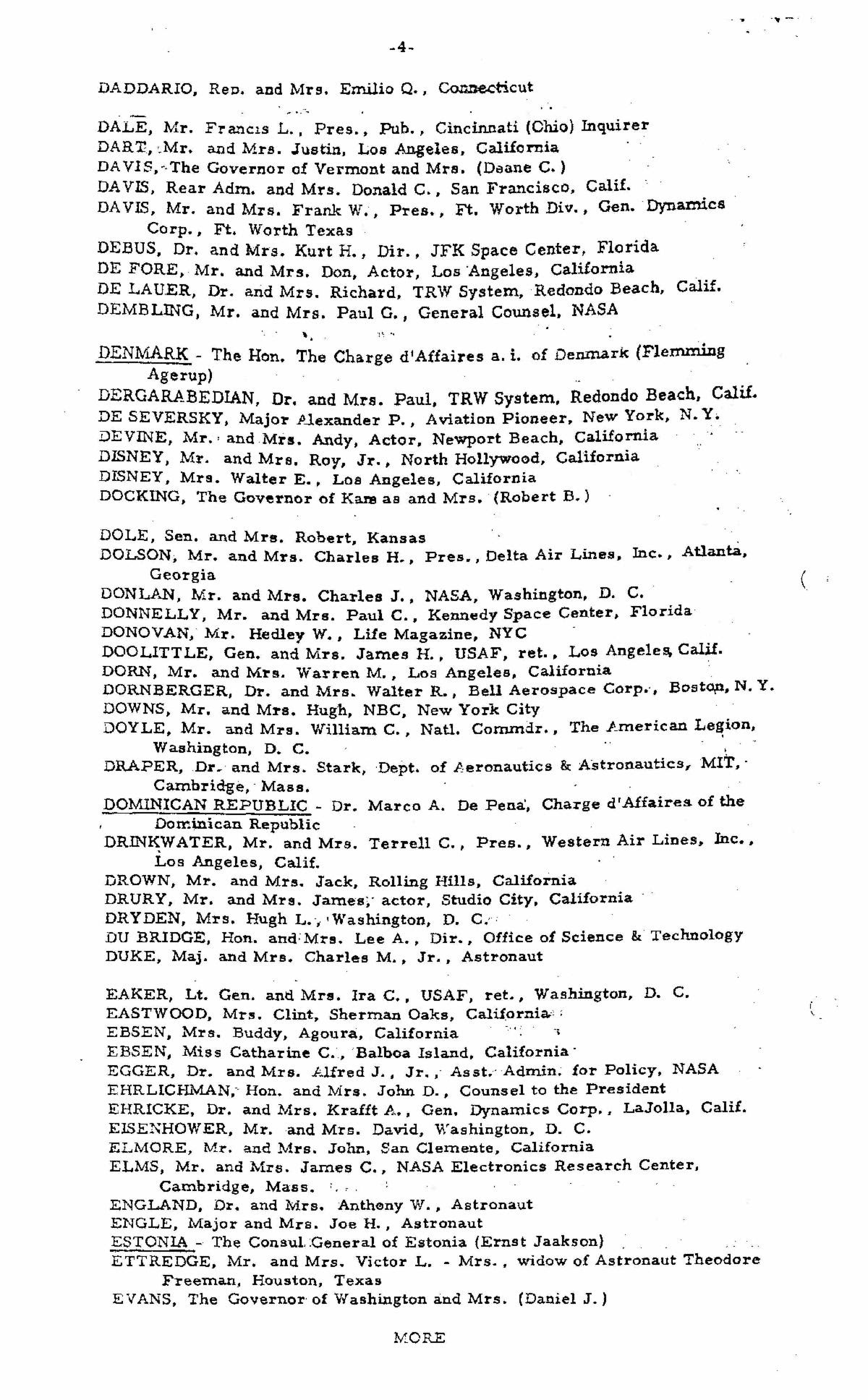 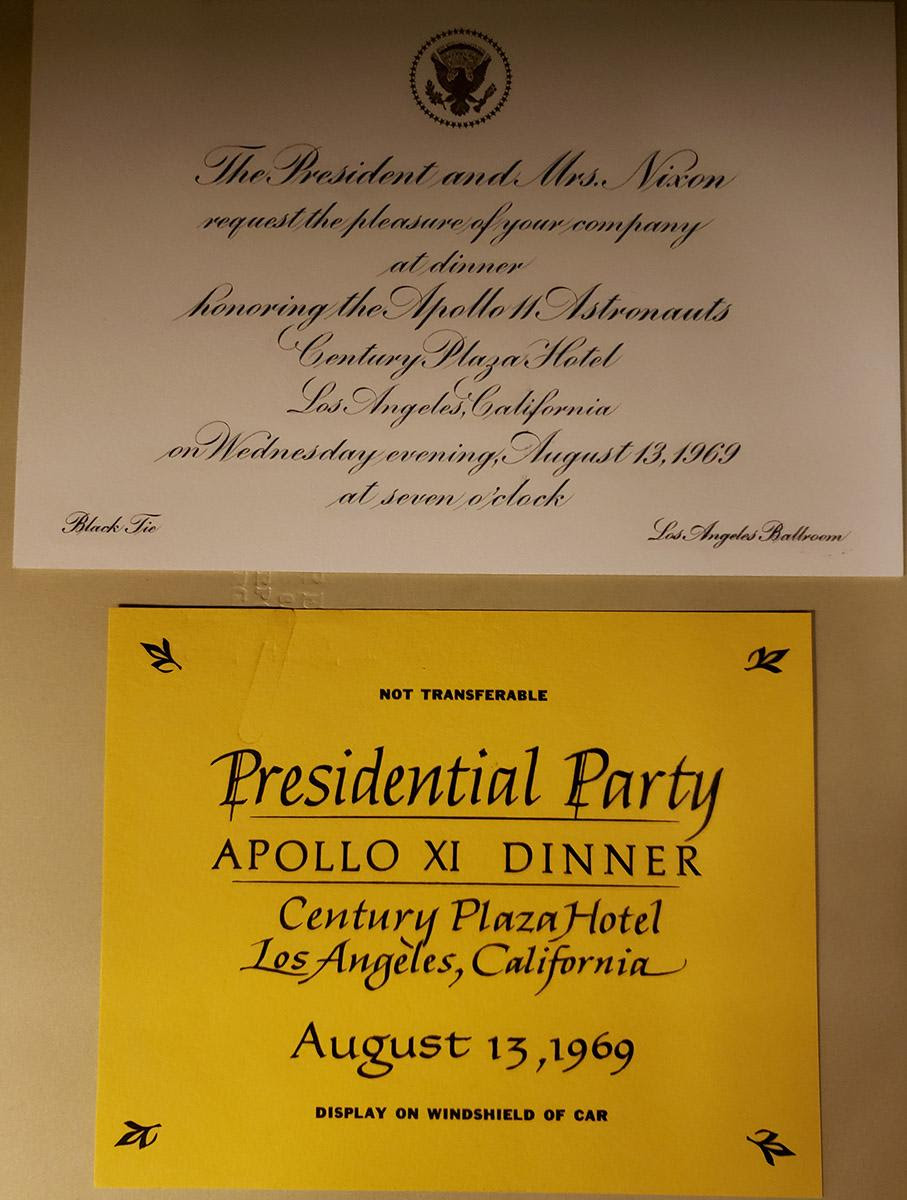 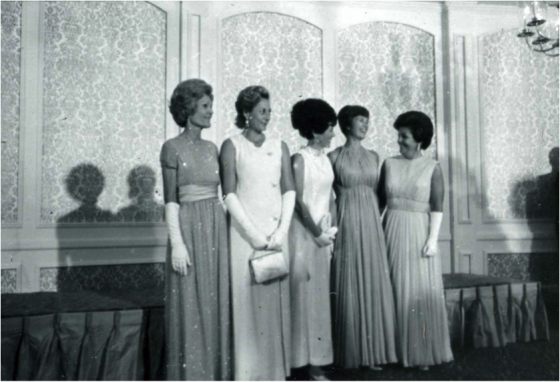 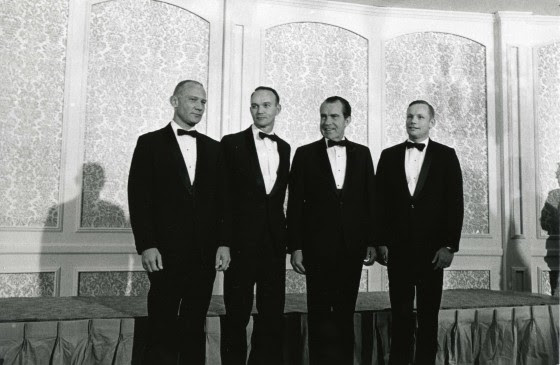 President Nixon and the astronauts of Apollo 11. From left to right Buzz Aldrin, Michael Collins, President Nixon, and Neil Armstrong. 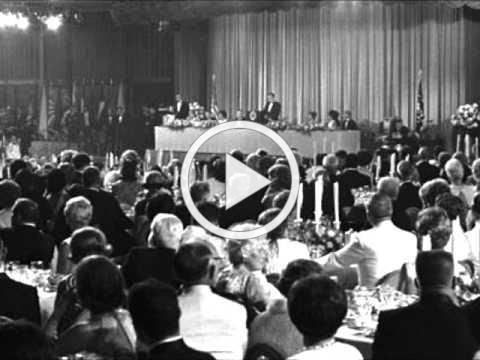 Incomplete audio of President Nixon's August 13, 1969, presidential dinner held at the Century Plaza Hotel in Los Angeles, honoring the Apollo 11 astronauts following the first manned landing on the moon. The Los Angeles Times called it the "Dinner of the Century," and the New York Times said it was "one of the largest, most prestigious, and most publicized state dinners in history."

On the next installment of the Nixon/Disney Newsletter: Foreign Policy, Mouseketeers in the White House, and Walt Disney World.