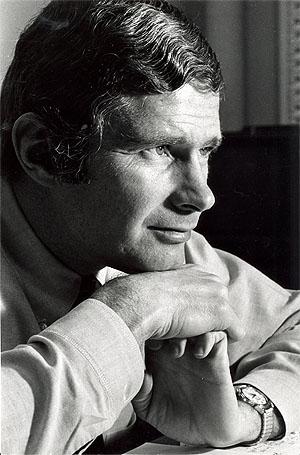 Nixon administration official Fred Malek has died.
Mr. Malek served several Presidents and his party, and was a key member of the private Nixon Foundation.
We send our deepest condolences to his friends and family.
Read the Nixon Foundation's statement below or click HERE to view on the Foundation's website.

"Fred Malek, a dedicated public servant and counselor to presidents, and a decisive, inspirational leader in business, real estate and hotel management, died yesterday at 82.

Fred was a member of the Board of Directors of the Richard Nixon Foundation and Chaired the Richard Nixon Centennial Legacy Campaign, raising more than $25 million to create the New Nixon Library and fund important, ongoing educational programs and initiatives.

We are absolutely heartbroken to learn of the passing of Fred Malek. Fred was a giant. He rose from the humblest of beginnings to serve as a dedicated public servant and counselor to presidents, and a decisive, inspirational leader in business, real estate and hotel management.

His energy was contagious, his passion infectious. Loyalty was the hallmark of his storied career. Whether in the Nixon White House, at Marriott, Northwest Airlines, or Thayer Lodging — you always knew where Fred stood and you always knew why.

Fred did more for our father’s legacy than anyone else in recent memory. He seized the reins of the campaign to build the New Nixon Library and continued to lead the charge for nearly seven years.

Today — as a fitting tribute to Fred — every visitor to the Nixon Library begins their tour in the Fred and Marlene Malek Theater. His name welcomes visitors to some of the most highly respected institutions, including his beloved West Point, so that all who visit will know of this remarkable man.

The New Nixon Library is the house that Fred Malek built.

Fred’s love of his country was perhaps only surpassed by the love he had for his family and today, our thoughts, prayers and love are with Marlene and Fred’s family.

A great loss of a truly great leader and patriot. His countless really significant contributions to the Library and to the country have few parallels. Courage is what makes loyalty and integrity possible in trying times and Fred was blessed with all, to the lasting  benefit of the President, his legacy, and the nation he served so ably and well in so many ways. How very lucky we are to have had his leadership and friendship. We owe our sympathies, admiration  and gratitude to Marlene for supporting Fred’s extraordinary service and sharing him with us.

Fred Malek was brought into the Nixon administration in 1969 as Deputy Undersecretary of the Department of Health, Education and Welfare.  He later became Special Assistant to President Nixon, and Deputy Director of the U.S. Office of Management and Budget under Presidents Nixon and Ford.  Mr. Malek advised President Reagan as a member of the executive committee of the President’s Council on Cost Control, as a member of the President’s Commission on Private Sector Initiatives, and as a member of the President’s Council on Physical Fitness and Sports.  He served President George H.W. Bush as Director of the 1988 Republican National Convention, as Director of the 1990 Economic Summit of Industrialized Nations, with the lifetime rank of Ambassador, and as Campaign Manager for President Bush during 1992.  Malek served as National Finance Chairman for the 2008 McCain Presidential Campaign and in 2008 was appointed by President George W. Bush to the Board of Visitors of the U.S. Military Academy at West Point.

In his earlier investment activities Malek led the acquisition of the Ritz Carlton Hotel Company with Marriott International as a major equity partner, was one of three leaders in the acquisition of Northwest Airlines, led the acquisition of CB Richard Ellis (formerly Coldwell Banker), and was a partner with President George W. Bush in owning the Texas Rangers Baseball Club.  Previously in his business career, Malek was President and CEO of Marriott Hotels, President and CEO of Northwest Airlines, and Co-Chairman of CB Richard Ellis. During his eight year tenure as president of Marriott Hotels profits quintupled and the stock increased eight fold.

Malek was an active philanthropist serving on the Board of the Aspen Institute, the American-Israel Friendship League, the Richard Nixon Foundation and George H.W. Bush Library Foundation.  His philanthropy includes contributions for building the Malek Tennis Center and Malek Stadium at West Point; the O’Meara, Malek, Dawkins Class of 1959 Strength and Development Center at West Point; the Resnick-Malek Health Center in Aspen; the Fred and Marlene Malek Theater at the Richard Nixon Presidential Library and Museum; and the Marlene and Fred Malek School of Health Professions at Marymount University.  He also served as one of the two Co-Chairman leading West Point’s largest ever capital campaign.

More recently, Malek was appointed Chairman of the Woodrow Wilson International Center for Scholars by President Donald Trump in 2017.

Malek was a graduate of West Point and the Harvard Business School, and was an Army airborne ranger serving with a special forces (Green Beret) team in Vietnam.  He is survived by his wife, Marlene, two children and five grandchildren."