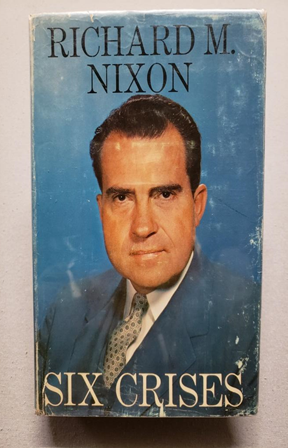 In 1962, Richard Nixon published his first book, Six Crises. The book recounts his personal reactions to each of six crises Nixon experienced early in his political career, chapter by chapter.  Nixon completed the book in just 10 months, devoting 14-hour days, dedicating the book to Pat Nixon. The First Edition Introduction to Six Crises reveals Nixon’s initial uncertainty about writing a book, even sharing in the Introduction that writing the book “turned out to be the seventh major crisis” of his life up to that point. Unsure about joining the “literary” ranks, Nixon received encouragement from a number of key figures, including Mrs. Dwight D. Eisenhower, President John F. Kennedy and close friend and advisor, Adela Rogers St. Johns. The book became an instant best-seller. In 1990, Nixon himself updated the Introduction to the edition published especially for the opening of the Nixon Presidential Library in Yorba Linda, California. 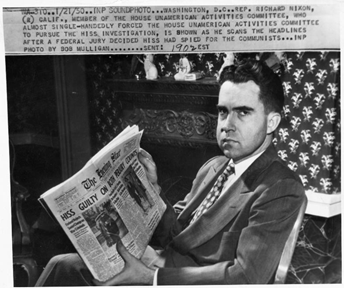 The Hiss case was the first major crisis in Richard Nixon’s political life. Extraordinarily controversial and complex, in this chapter, Nixon recounts a tireless dedication, intellectual rigor, and how birds and pumpkins played a role in the conviction of Alger Hiss. While Richard Nixon served in Congress, he joined the House Un-American Activities Committee (HUAC) and became an integral figure in the Hiss case. Nixon’s role in the investigation and conviction of this high-ranking Department of State official catapulted a young congressman from California to national attention. 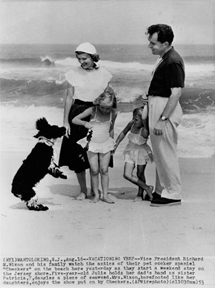 Selected as the running mate of Republican presidential nominee Dwight Eisenhower in 1952, then-Senator Richard Nixon’s place on the ticket was threatened when implications of an improper political fund threatened to derail his political career and aspirations. In a gutsy, risky move, Nixon fought back and publicly denied the allegations in a nationally broadcast speech commonly known as the “Checkers Speech.” Nixon itemized his modest family finances and refused to give back Checkers, a black and white spotted puppy gifted to the family.  Access to the Checkers Speech is available below: 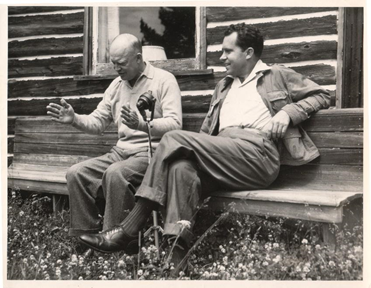 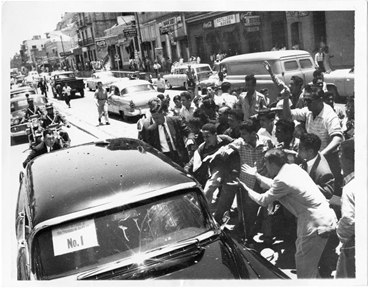 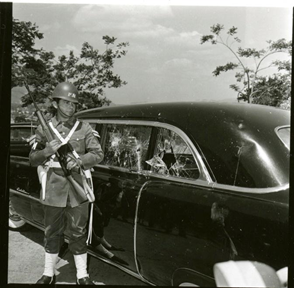 In 1958, Vice President and Mrs. Nixon traveled to Latin America to promote American goodwill. They faced many Cold War policy protests during their tour. The protests turned violent in Caracas, Venezuela when a mob attacked the motorcade, seriously threatening the safety of the Vice President and Mrs. Nixon. Nixon’s calm resolve prevented the tense situation from developing into a more serious international incident. 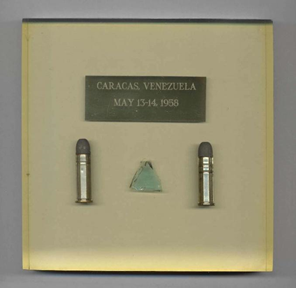 unused bullets carried by U.S. security personnel during the attack on the motorcade, shattered glass from Vice President Nixon’s limousine, and a plaque, “Caracas, Venezuela, May 13-14, 1958.” encased in Lucite. Gift from a foreign private citizen to First Lady Pat Nixon, National Archives and Records Administration, FP.1973.39

Khrushchev and the Kitchen Debate 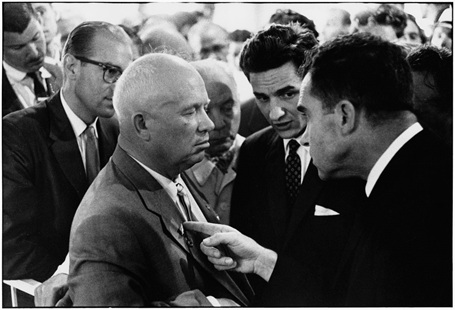 In 1959, Richard Nixon traveled to Moscow for the opening of the American National Exhibition. While in Moscow, Vice President Nixon and Premier Nikita Khrushchev engaged in an impromptu debate about the merits of capitalism versus communism. The spontaneous “Kitchen Debate” took place in a model American kitchen and raised Nixon’s profile as a shrewd and informed diplomat. It was Nixon’s posture in this debate - the virtues of freedom versus the crisis of communism - that helped Nixon secure the Republican Party’s nomination for president in 1960. 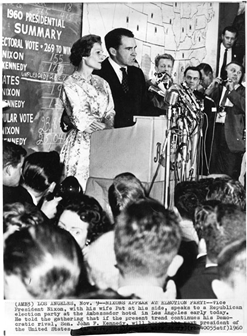 In the 1960 United States presidential election, Richard Nixon and John F. Kennedy participated in the first ever televised presidential debates. After a grueling and physically demanding campaign, Republican standard-bearer Vice President Nixon lost the election on a razor thin margin to upstart Senator John F. Kennedy. One market research firm “found Nixon winning among radio listeners 43 percent to 20 percent and Kennedy winning among TV watchers, 28 percent to 19 percent. From this poll, some have concluded that JFK won on appearance, not substance.” The 1960 presidential race was history making and changed the course of future campaigns. 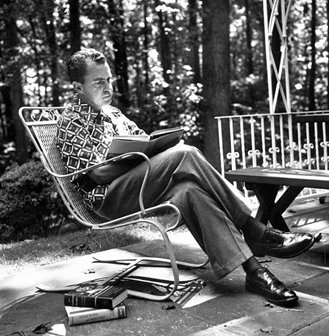 Six Crises was republished in 2013 for the celebration of Richard Nixon’s centennial birthday. The 2013 special edition is currently available through the Richard Nixon Foundation.