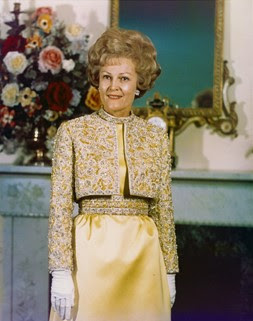 Pat Nixon was the First Lady of the United States from 1969-1974. Thelma Catherine "Pat" Nixon (nee Ryan) was born March 16, 1912, in Ely, Nevada. By the age of two, she and her family had moved and settled in Artesia/Cerritos, California. Her parents passed away by the time she was 18 years old. Consequently, and out of pure necessity to support herself and her family, Pat had to work. She worked various jobs that included being a driver, a pharmacy manager, a telephone operator, a custodian sweeping office floors, an x-ray technician, and an actor.

After entering WWII in 1941, U.S. Navy Lieutenant (junior grade) Richard Nixon found himself stationed in the South Pacific, while Pat worked as an economist at the federal Office of Price Administration. After the war, the Nixons' political ascendancy eventually led to the Presidency in 1969.

As First Lady, Pat Nixon assumed her new role vigorously, promoting volunteerism, serving as “America’s Ambassador of Goodwill,” and crisscrossing the globe championing “personal diplomacy.” At the time, Pat Nixon held the record as the most traveled First Lady, once flying into an active combat zone while on a trip to South Vietnam, where she visited an army hospital speaking with wounded soldiers there at the height of the conflict in 1969.

The First Lady was popular and had always seemed relatable and personable with ordinary citizens, often personally greeting White House visitors unannounced. Much of the press viewed her favorably, noting how sharp, responsive, and sensitive she was.

After leaving office in 1974, the Nixons settled in San Clemente, California. In 1979, they moved to the East Coast to be near their children and grandchildren.

Patricia Ryan Nixon passed away on June 22, 1993, after a period of declining health. She is laid to rest in the gardens of the Richard Nixon Presidential Library and Museum in Yorba Linda, California, next to the President.

Through DocsTeach, the National Archives’ tool for online teaching activities through primary resources, learn more about Pat Nixon’s early life as well as her travels as First Lady.