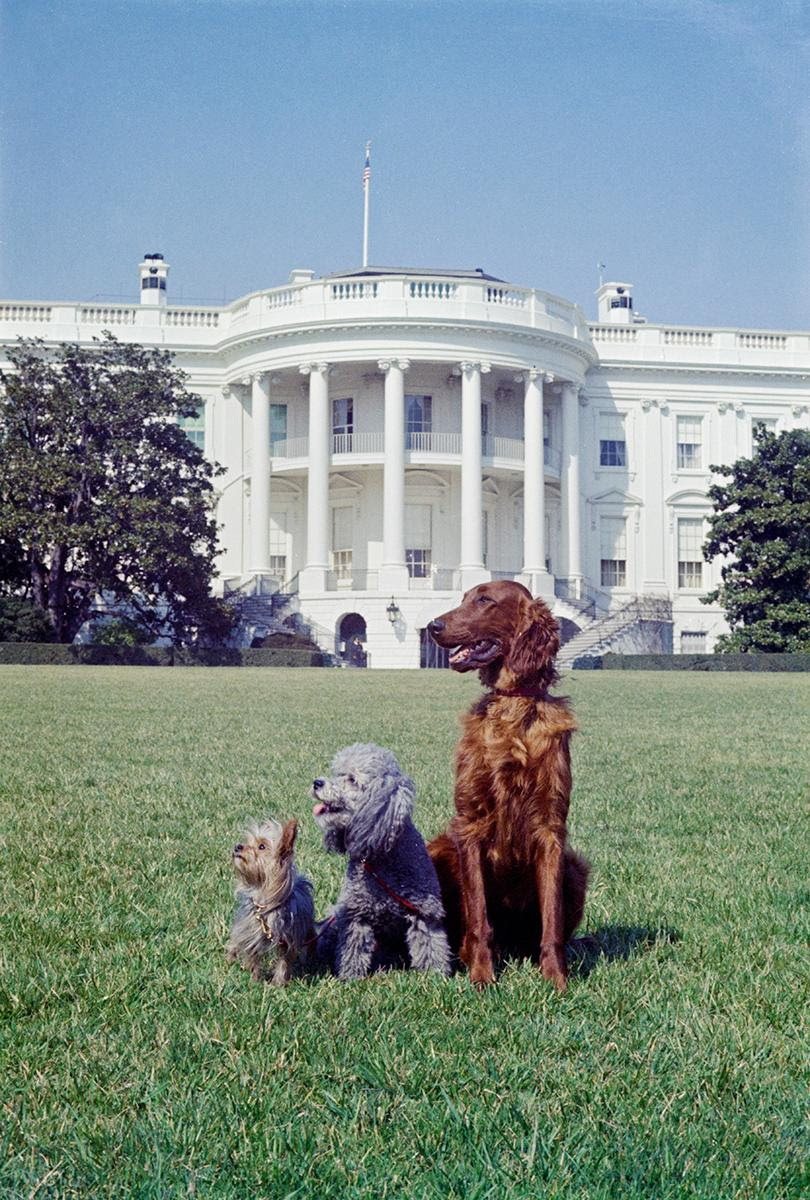 Presidential pets provide companionship and humanize the president's political image, often enduring as much attention as their owners. Various animals such as alligators, raccoons, snakes, goats, sheep, horses, cows, cats, and fish have made their homes on the lush eighteen acres. The most favored Presidential pet is the dog, and Richard Nixon’s canine-loving household was no different. During their tenure, the Nixon's welcomed three dogs into the White House, Pasha, Vicky, and King Timahoe. 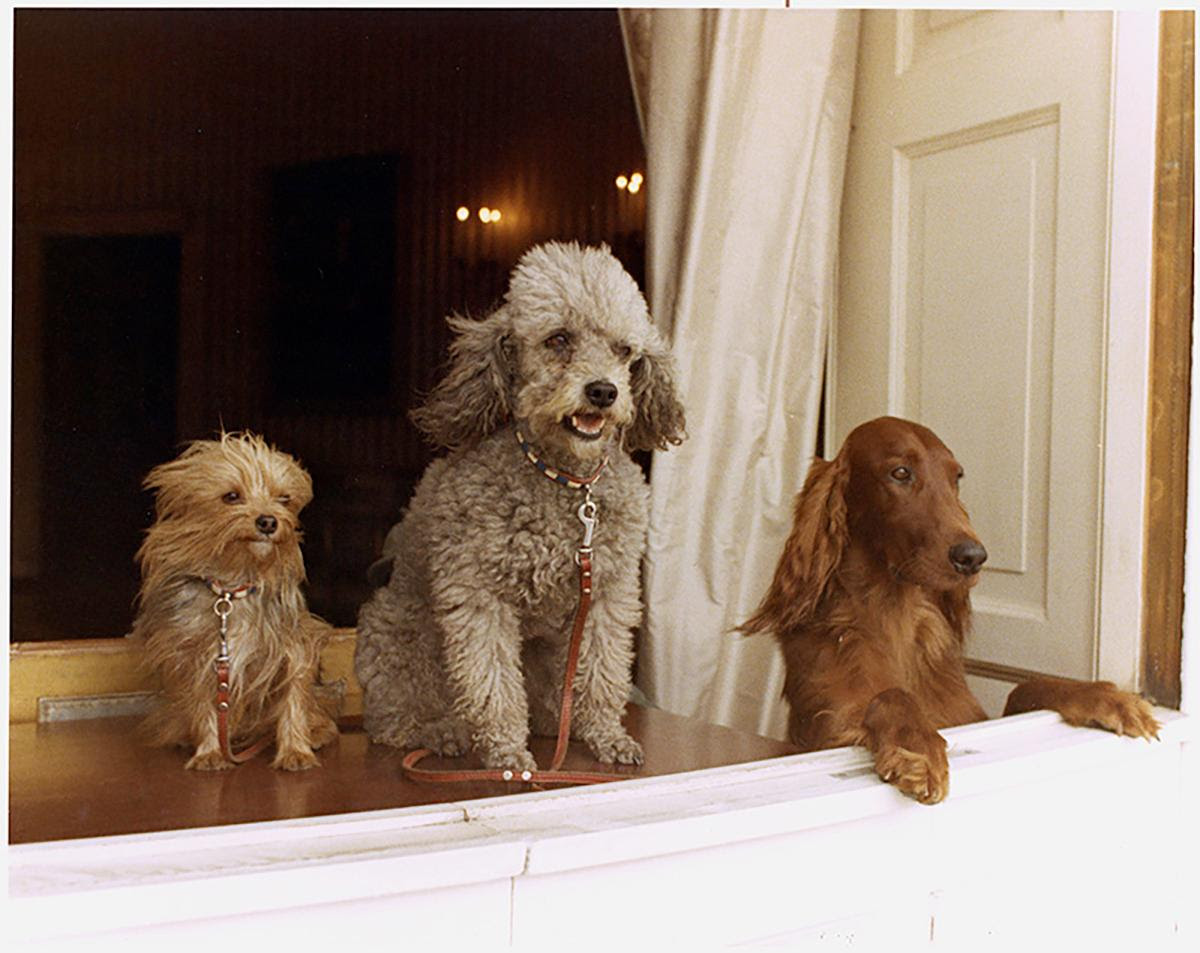 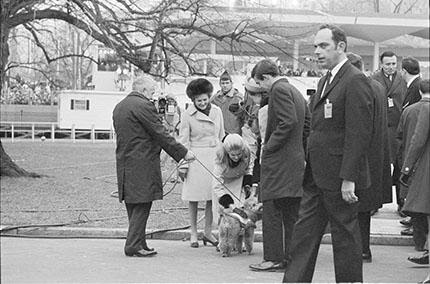 Moving into 1600 Pennsylvania Avenue on Inauguration Day, January 20, 1969, and dressed in their finest, Pasha and Vicky greeted the Nixon family at the top steps of their new home. Pasha, a Yorkshire terrier, and Vicky, a miniature poodle, belonged to daughters Tricia and Julie. After both daughters married, the two dogs resided with Pat and Richard in the White House. 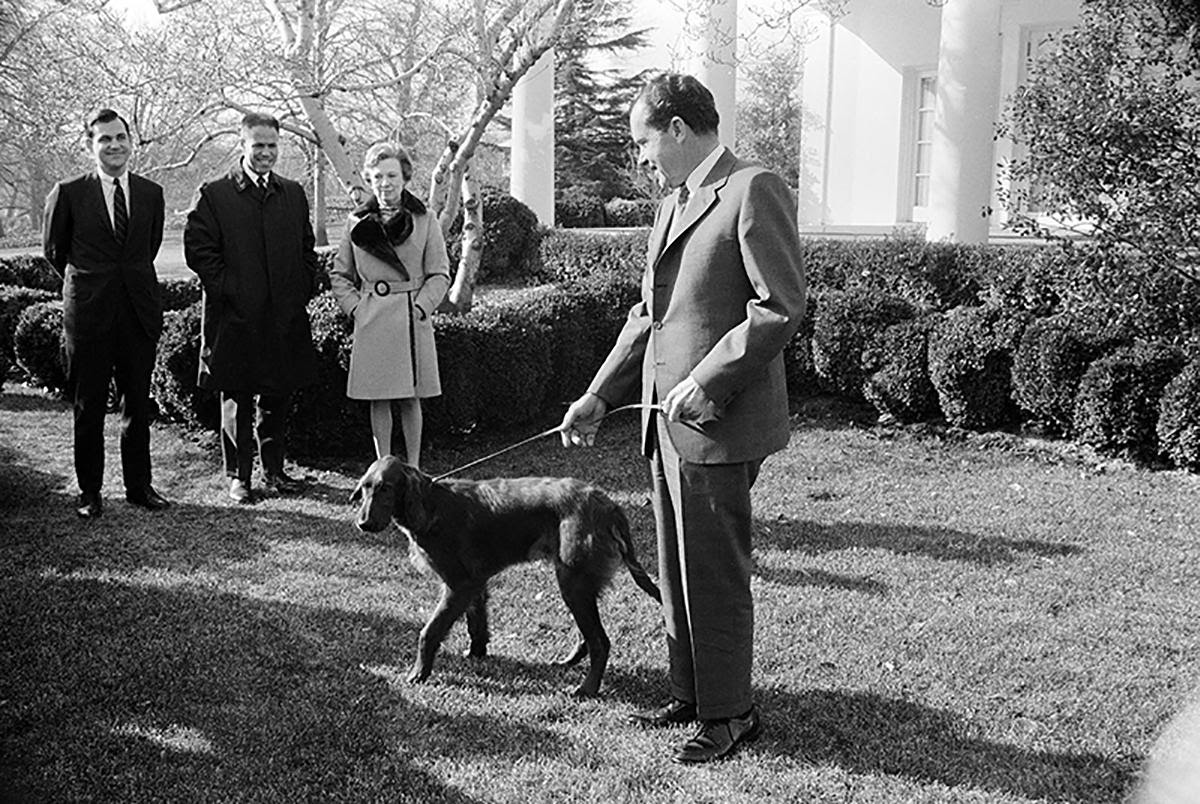 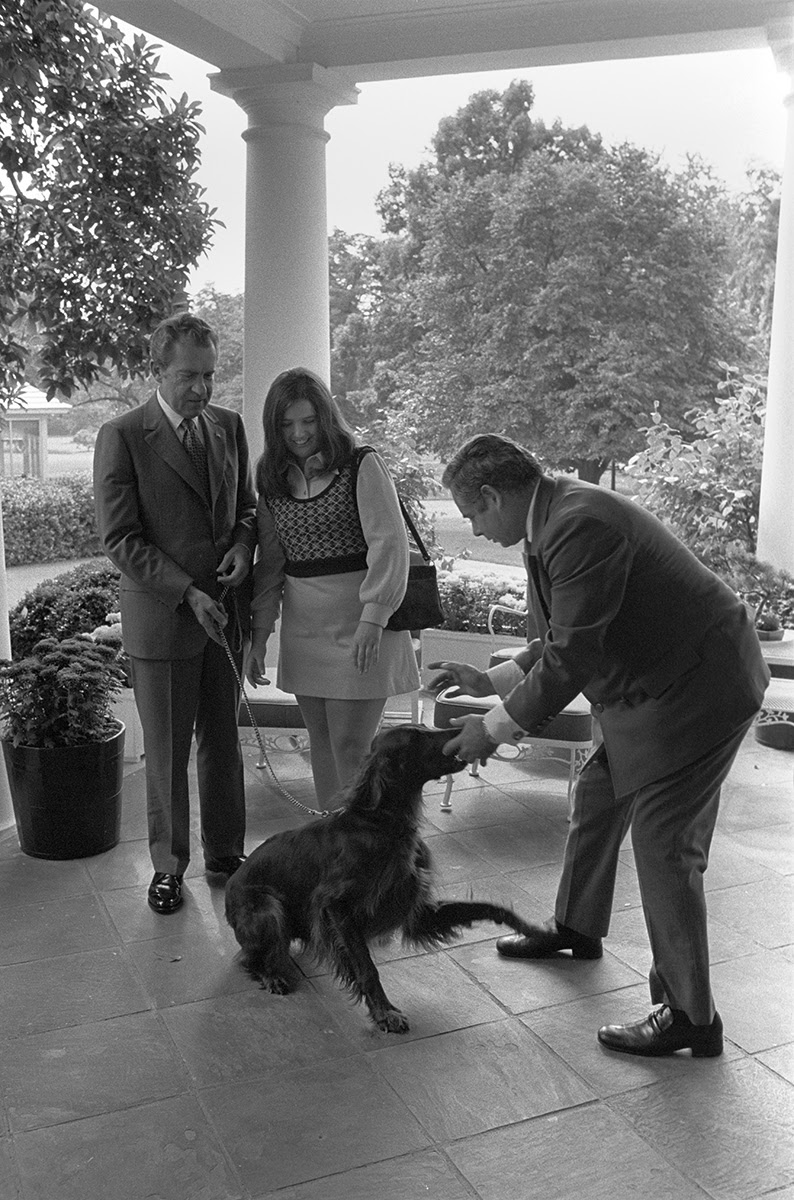 Marion Scully of Timahoe, County Kildare, Ireland, called on President Nixon at the White House on 9/19/1972. The presidential helicopter landed on Miss Scully’s father’s farm in Ireland in October 1970 when the President visited Timahoe in search of ancestral graves. Also shown is the President’s valet Manolo Sanchez. The Nixon family dogs spent much time with Manolo and Fina Sanchez. The President explained that his Irish Setter, King Timahoe, understood commands in Spanish. Image: WHPO- D0422-12

On January 28, 1969, Pasha and Vicky welcomed King Timahoe, an Irish Setter named after the hamlet in Ireland where Nixon's ancestors stemmed, to the four-legged family. King Timahoe, Tim for short, was too exuberant for the Nixon family dogs, and Vicky wanted nothing to do with Tim while Pasha barked continuously. Eventually, Pasha and Vicky accepted Tim, and they became fast friends.

The young Irish Setter was a birthday present to President Nixon from his staff and spent many of his formative years with Nixon's private valet, Manolo Sanchez. Manolo, a naturalized Spanish American citizen, trained the puppy in Spanish. Eventually, the three dogs got along famously and spent much of their time with the family inside the White House or resting comfortably in the dog run outside the West Wing. 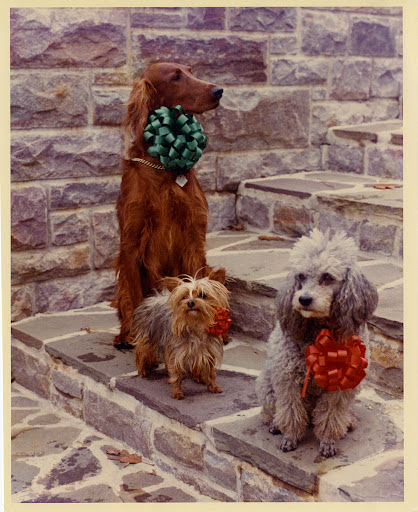 The Nixons included their dogs in holiday celebrations, birthday parties, family vacations, and Trisha's wedding. On Tricia's 50th anniversary, she reminisced about descending the steps of the South Portico and her father pointing out all three of the family dogs wearing wreaths made of flowers. The family often requested the dogs as they strolled the White House grounds. While working at the Saturday Evening Post, Julie published a children's short story Pasha Passes By, regaling readers with Pasha's adventures in the White House. Although Vicky enjoyed playing with her brothers, she was often found in the Nixon family's private residence and preferred to spend time alone with the President while he worked. She might have liked the quiet, or maybe it was the rumored dog treats that the President had stocked inside his desk. King Timahoe took matters into his paws on Nixon's 61st birthday, tasting the cake before the revelers finished singing Happy Birthday. Traphes Bryant, the unofficial presidential family dog wrangler to many administrations, wrote in his book The Dog Days at the White House (1975) that Nixon found watching the dogs very relaxing. "Tim and Pasha and Vicky are happy, affectionate dogs. And it's a wonderful thing to see that big smile on the President's face when he comes home and sees those three running out to meet him." 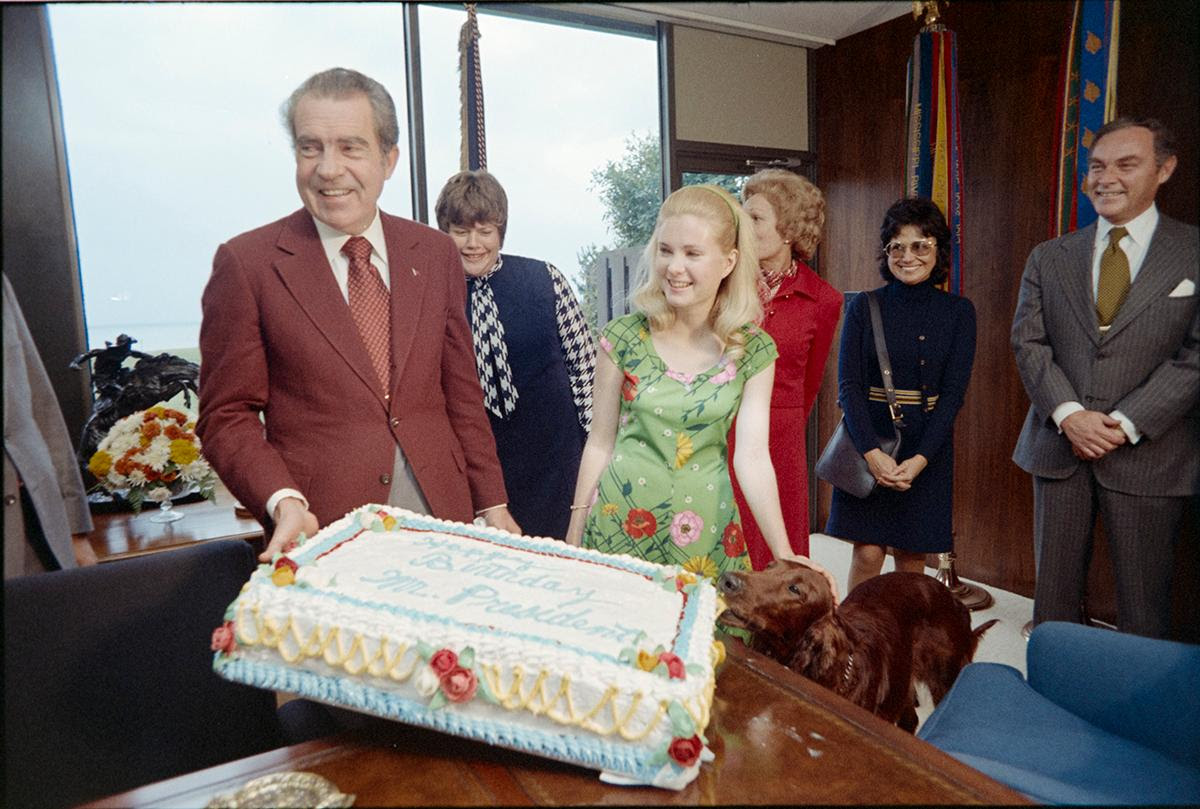 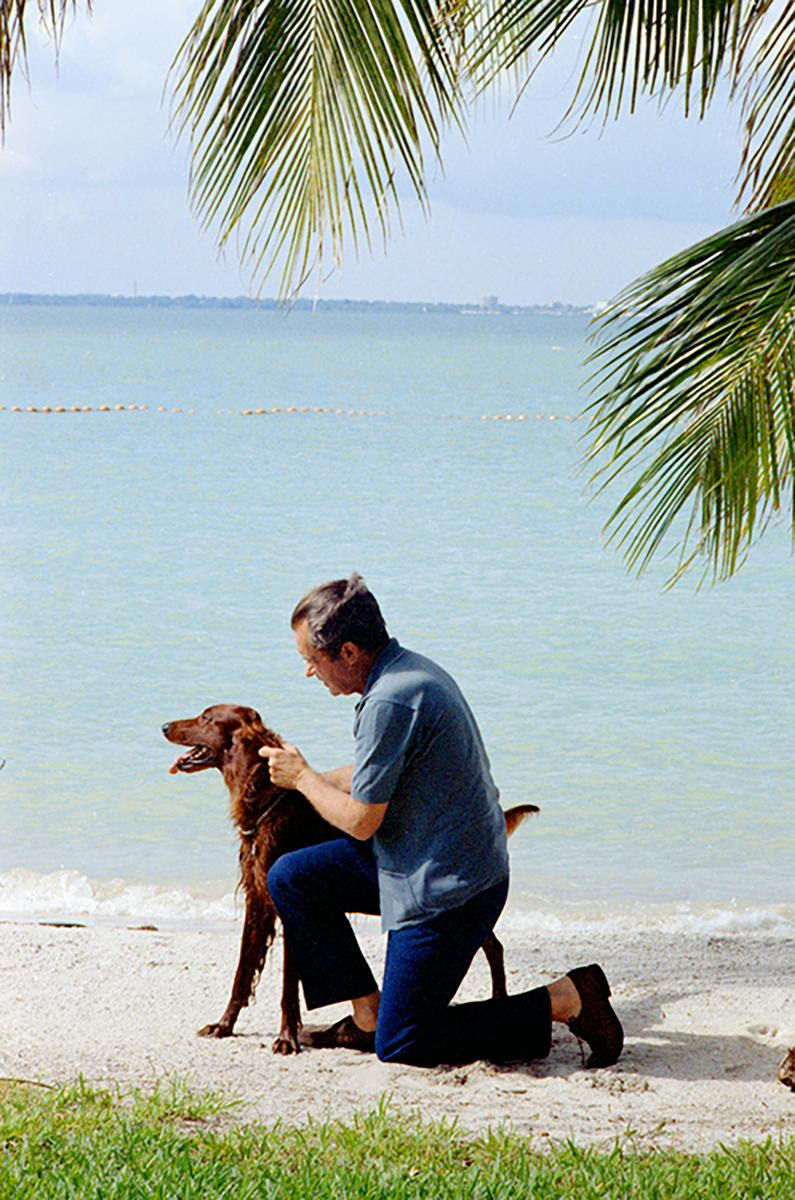 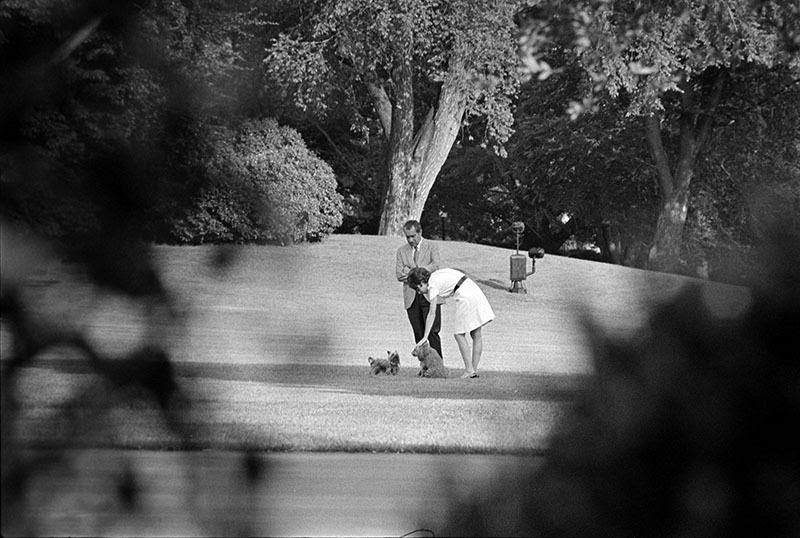 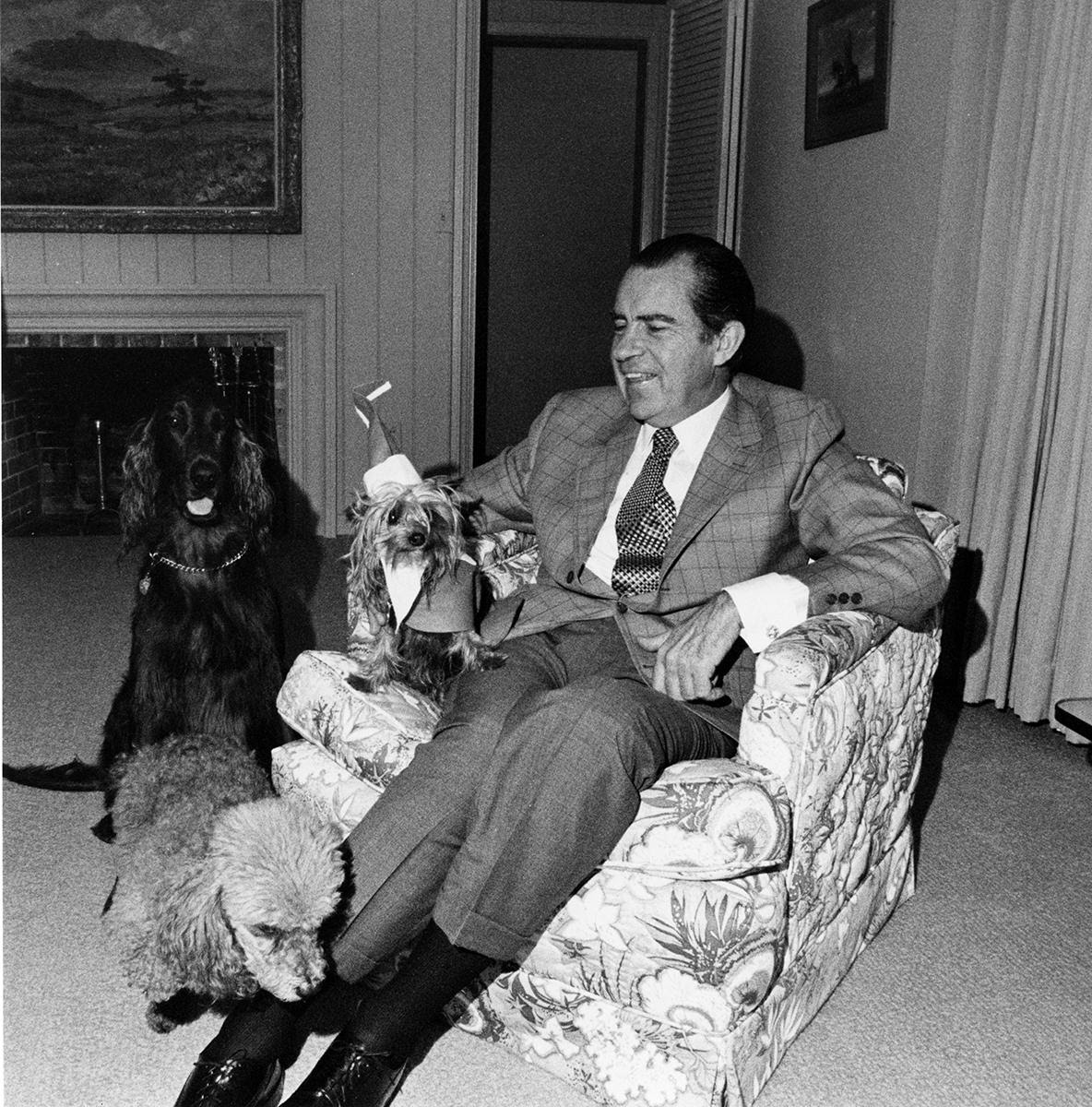 President Nixon seated informally in a living room during a meeting with Bebe Rebozo, J. Edgar Hoover, and Secretary of State William Rogers, while Vicky, the Nixons' Poodle, relaxed on the floor nearby. Image: NAID 194750 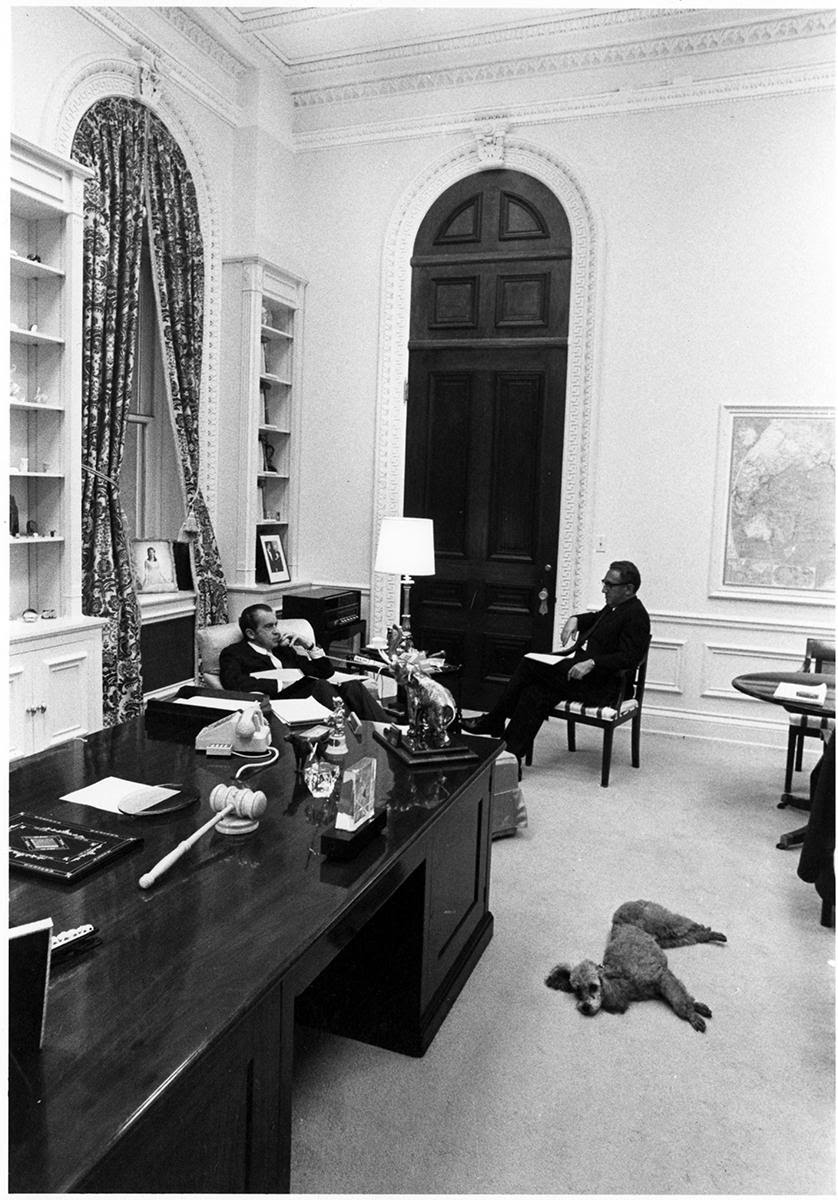 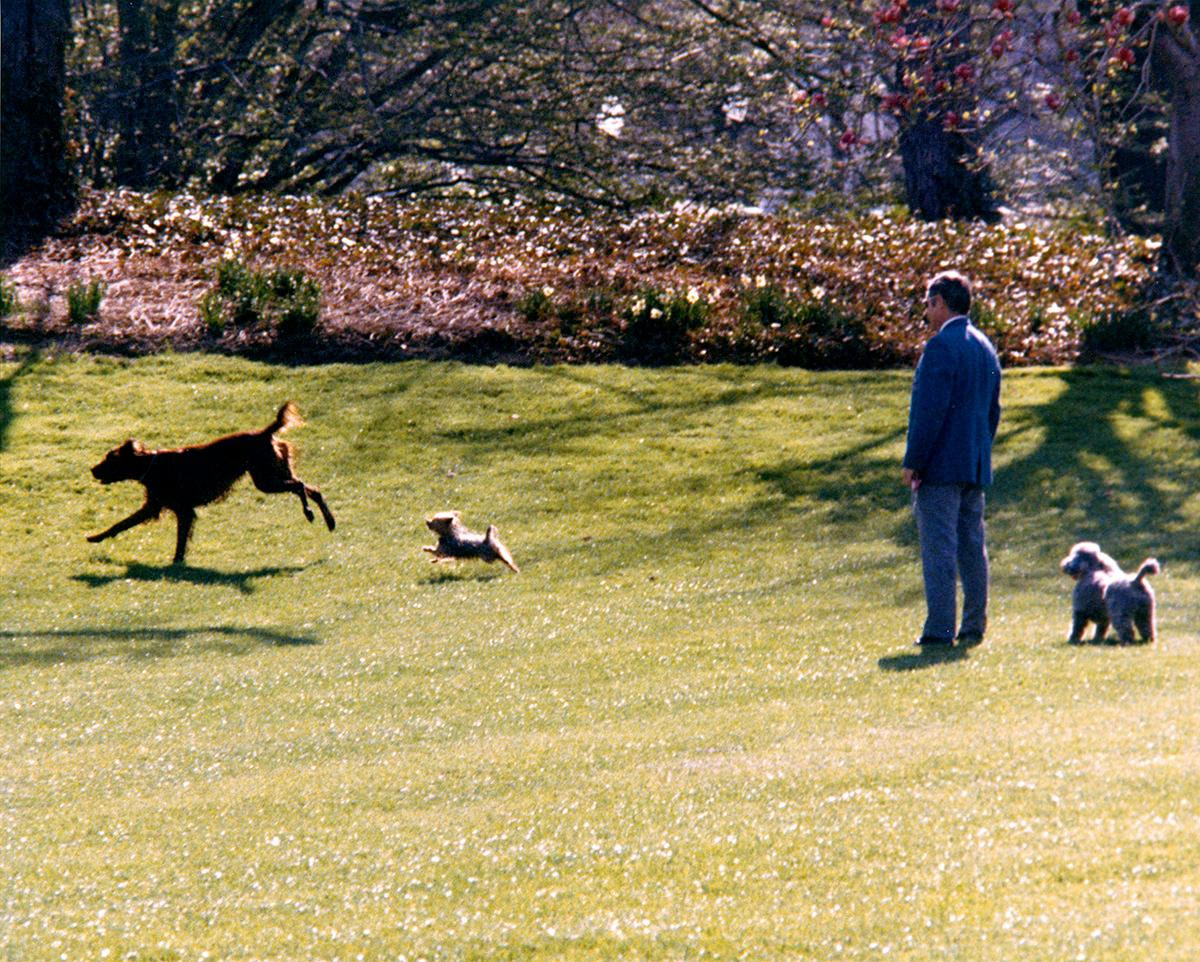 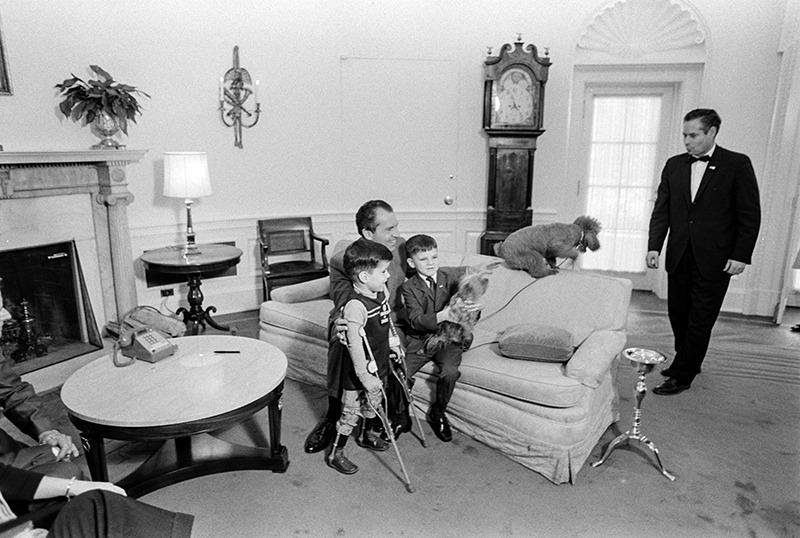 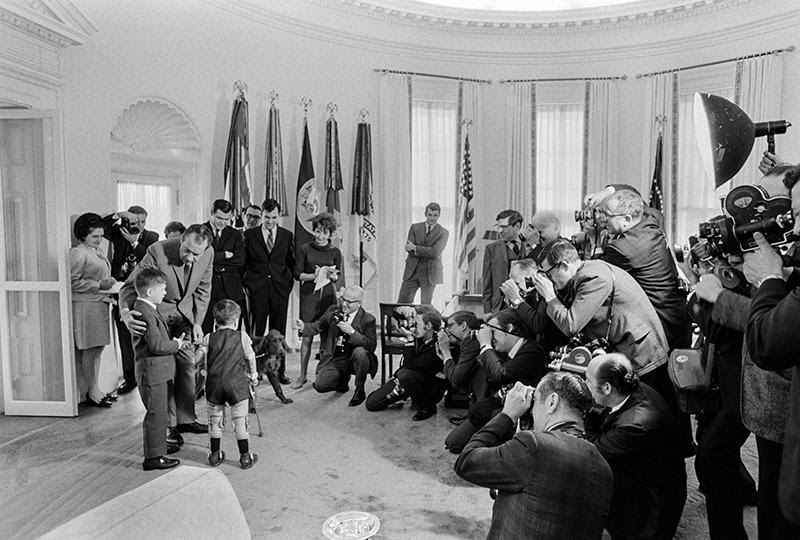 From Inauguration Day until the day the President resigned, these furry diplomats received Heads of State, Kings, Prime Ministers, and legislators into the White House. They were on hand to welcome the poster children for the March of Dimes and the National Hearing and Speech Foundation.  After his resignation, the dogs relocated with the family to San Clemente, California. 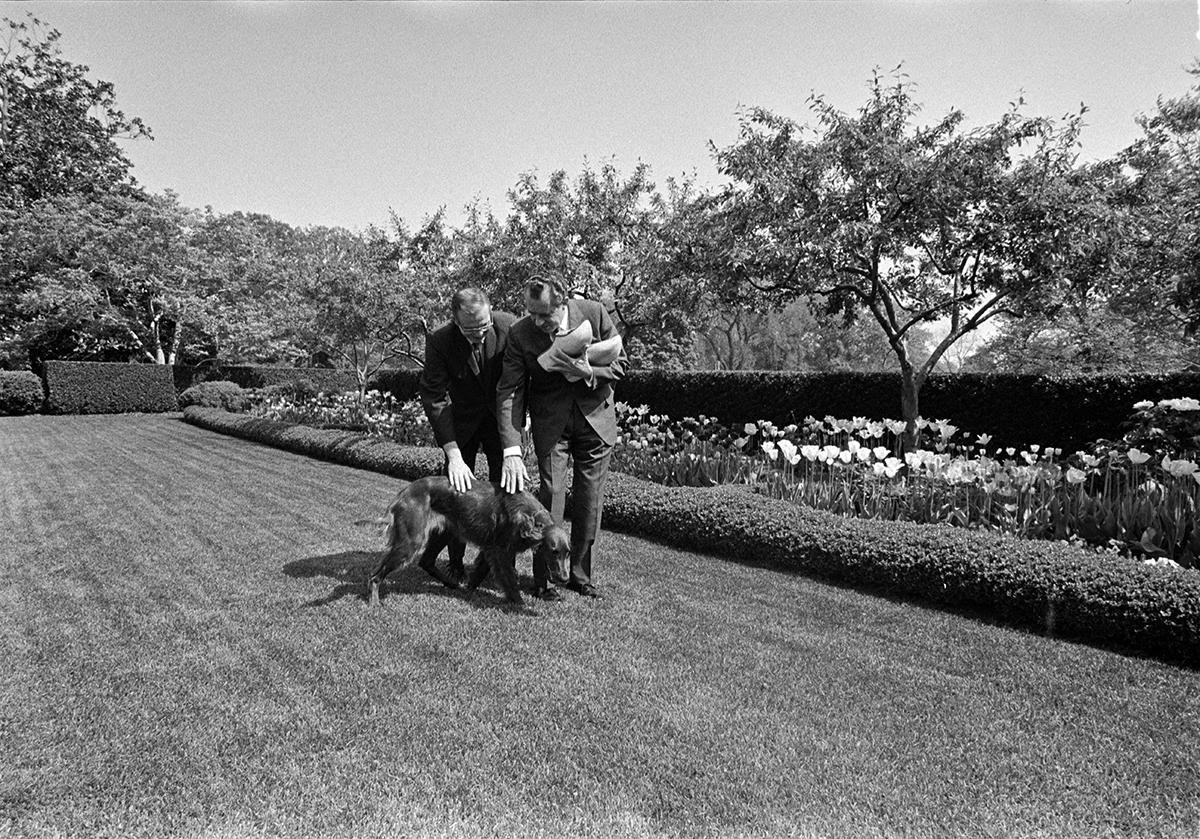 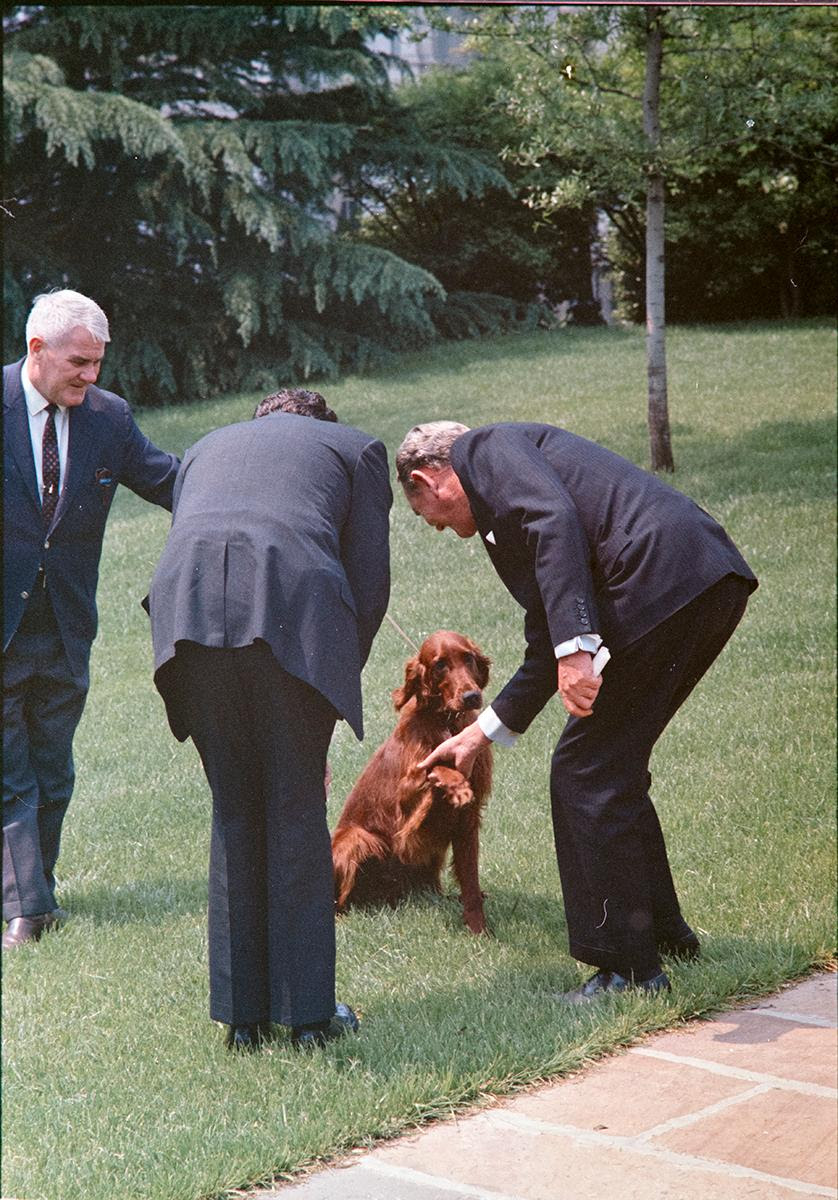 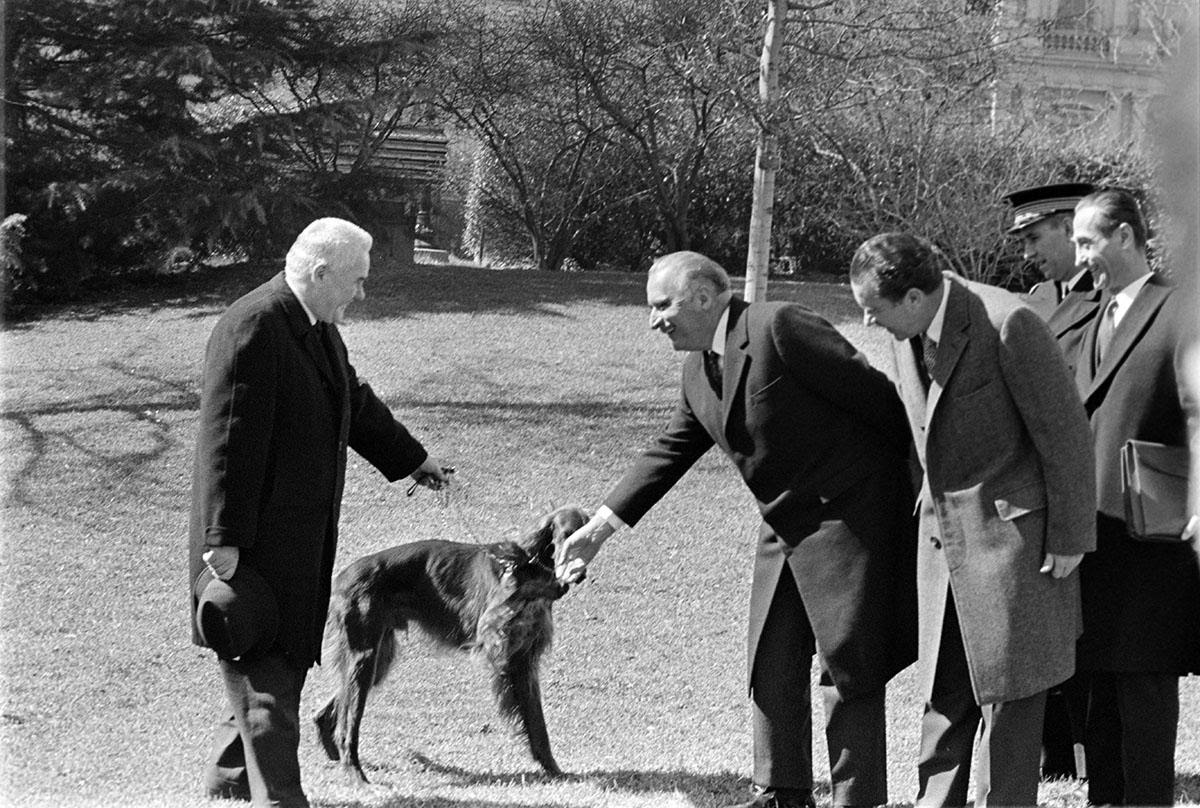 President of France Georges Pompidou petted and said goodbye to the Irish Setter King Timahoe in the White House Garden on 2/26/1970. Image: WHPO-3043-11 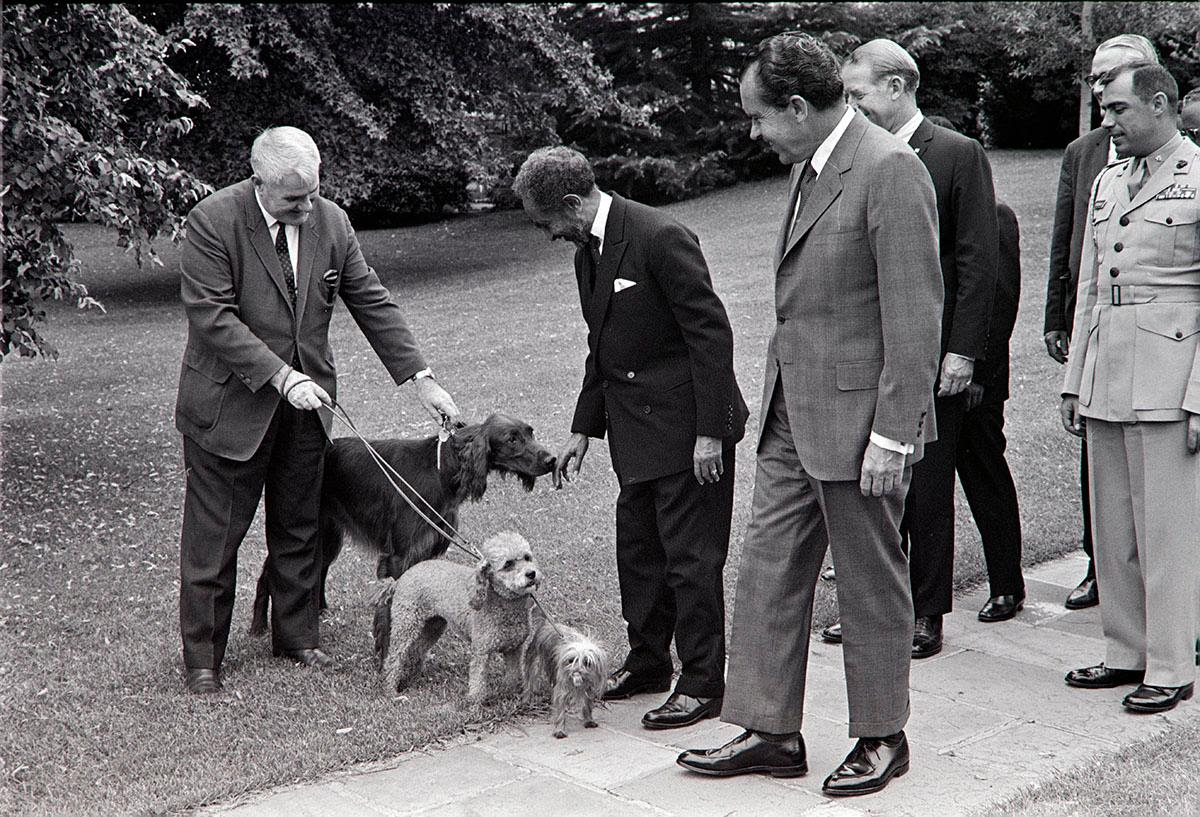 President Nixon and Emperor Haile Selassie I of Ethiopia played with the Nixon family dogs, Vicky, Pasha, and King Timahoe, on 7/9/1969.  Image: WHPO-1507-09A 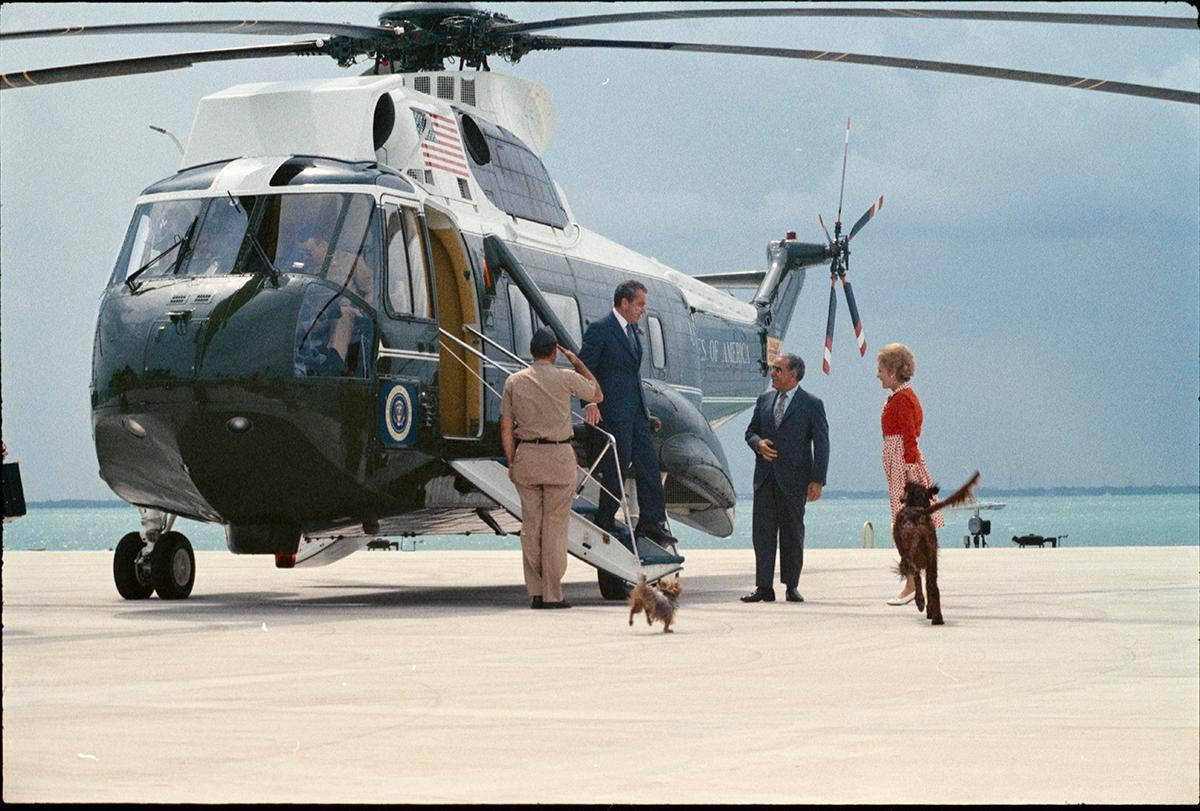 Marine One Helicopter parked on the airport tarmac. Bebe Rebozo greets President Nixon and First Lady Pat Nixon as they disembark during their arrival at Key Biscayne. The family dogs, King Timahoe and Pasha, are seen running free. Image:WHPO-E0875-12A 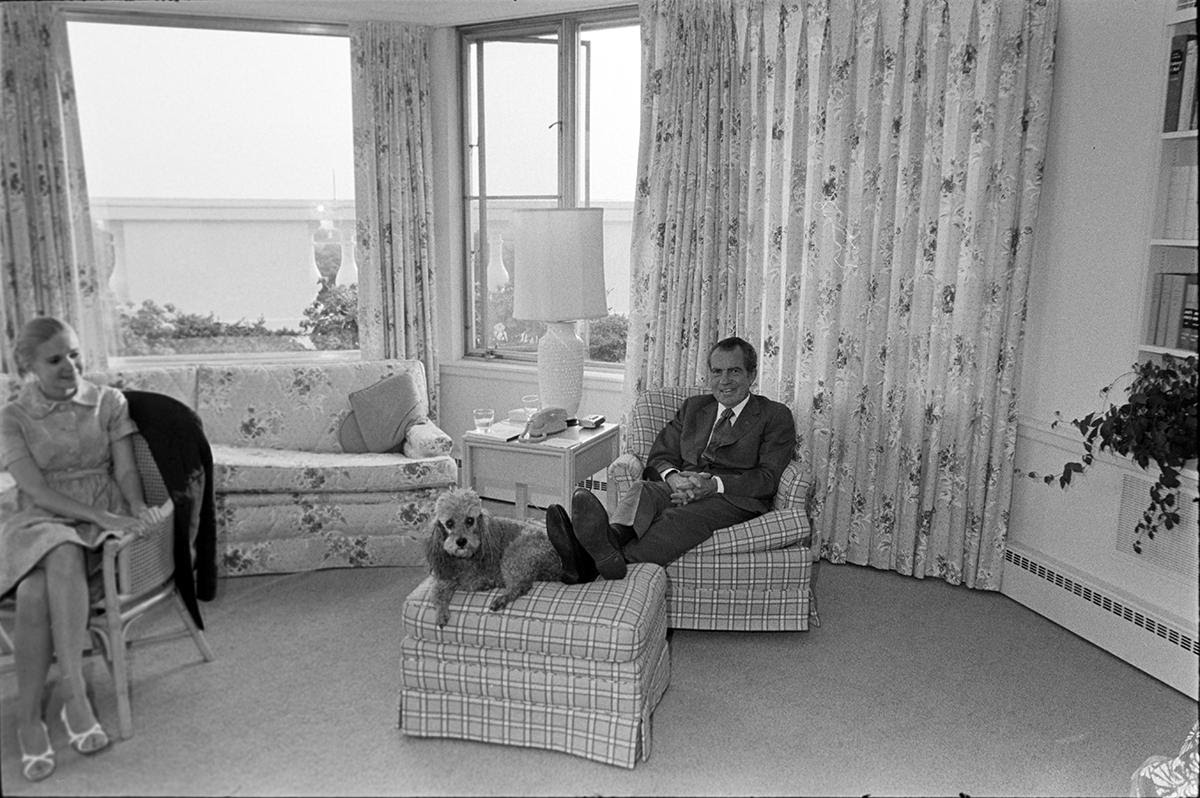 President Nixon sits with his feet up on an ottoman next to Vicky while Tricia Nixon Cox sits nearby on the night the President announced his resignation decision to his family on 8/7/1974. Image: WHPO-E3359-13A 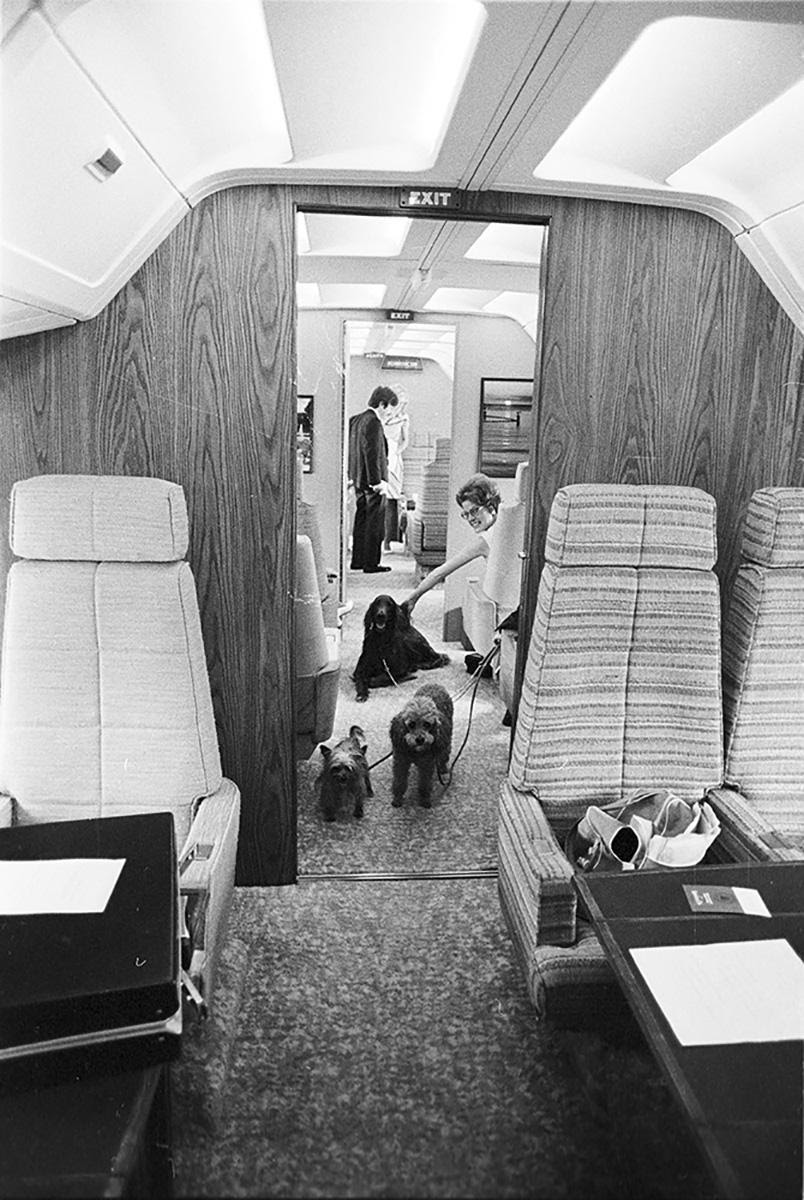 The three dogs, along with staff aboard Air Force One, during President Nixon's last day departure flight on 8/9/1974. Image: WHPO-E3398-12 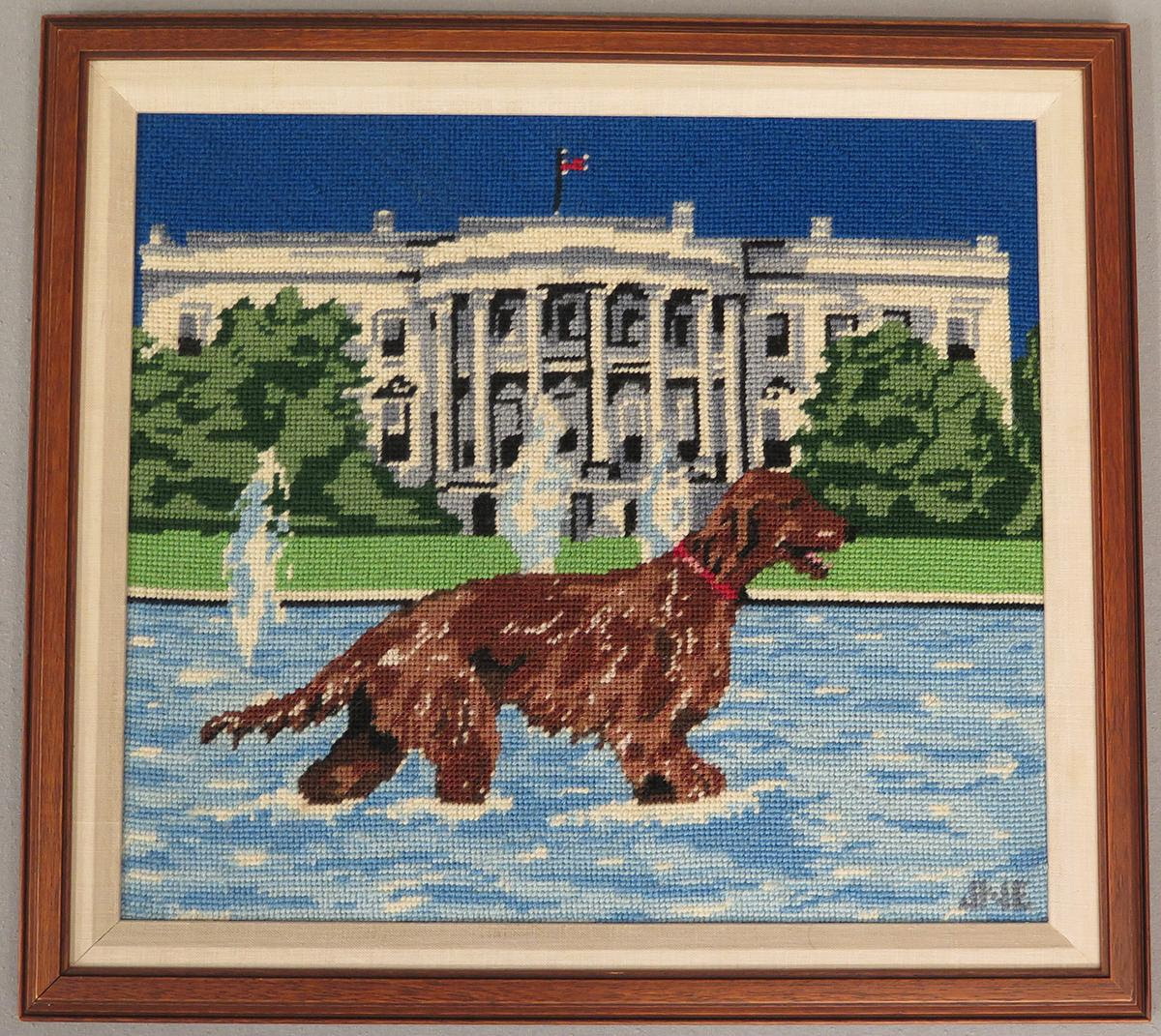 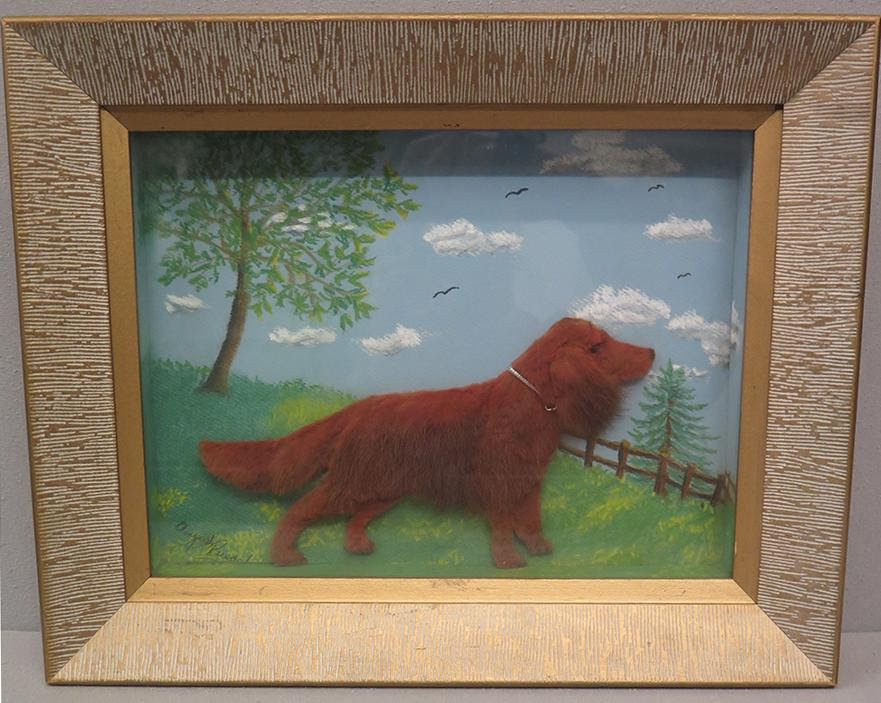 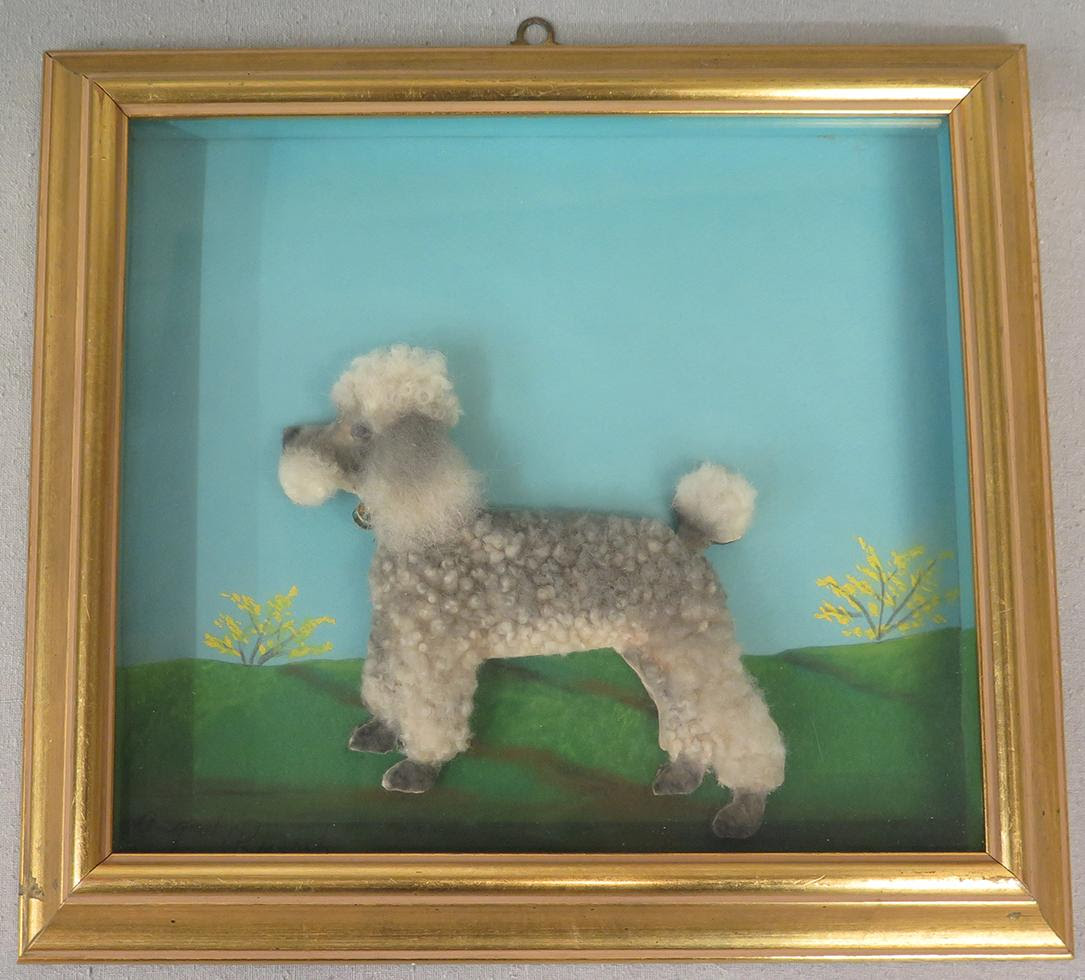 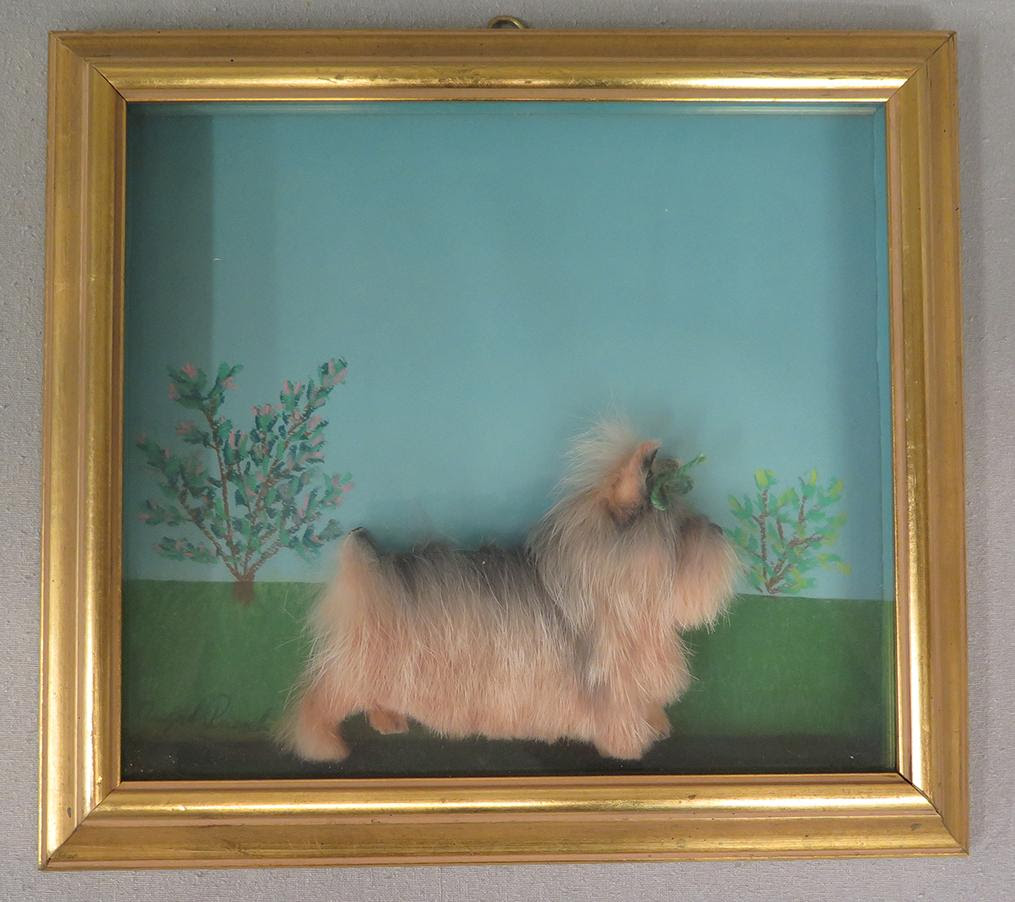