The Declaration of Independence: Lesser-known Facts

The Declaration of Independence: Lesser-Known Facts 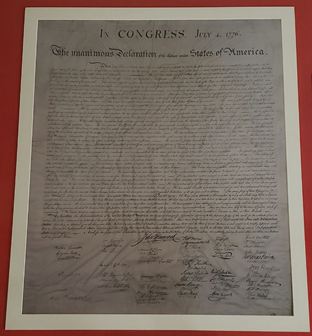 Photograph of the 1823 William J. Stone engraving facsimile of the Declaration of Independence. On d﻿isplay at the Richard Nixon Presidential Library and Museum. 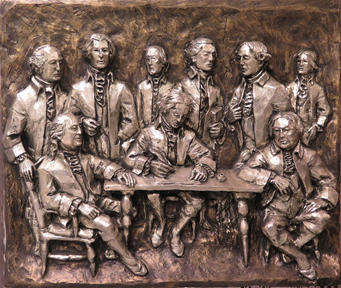 This past Sunday, July 4, 2021, our Nation celebrated its 245th anniversary of the Declaration of Independence. Many know the history of the birth of our Nation. It is part of the school curriculum, written about in Pulitzer Prize-winning novels, showcased at Walt Disney World, and acted out on the silver screen. Today, we would like to highlight some lesser-known but exciting facts surrounding this vital document. 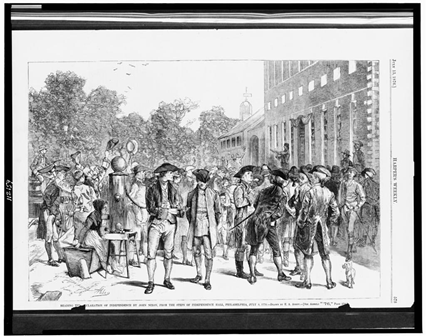 Thursday, July 8, 2021, marked the more obscure 245th anniversary of the first public reading of the Declaration of Independence. At noon, the bell (later renamed the Liberty Bell) rang, summoning the public to Pennsylvania Square (later renamed Liberty Square) in Philadelphia, where Colonel John Nixon read the proclamation. Colonel Nixon was active in politics and the militia, fighting alongside General Washington in the newly established state of New Jersey. 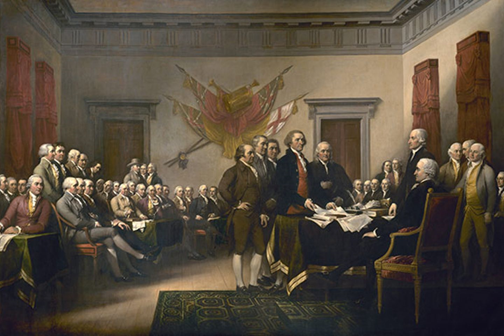 Just before the tenth anniversary of the signing of the Declaration of Independence, artist John Trumbull set out on a four-year mission, traveling the East Coast by carriage, to paint the likenesses of our founding fathers. A patriot in his own right, Trumbull hoped to document the events of the American Revolution in a series of paintings, immortalizing the Nation's creation by its founding fathers. The first painting, depicting the signing of the Declaration of Independence, garnered the artist a commission by Congress for an additional three revolutionary period scenes to hang in the Capitol Rotunda. An 1820 engraving further cemented the painting's popularity by embossing the reverse of the two-dollar bill, postage stamps, and this 1976 bicentennial postcard featured below. Bicentennial postcard from 1976 featuring the signing of the Declaration of Independence by artist John Trumbull. Richard Nixon Presidential Library and Museum, National Archives and Records Administration, 1981.1596.4.1 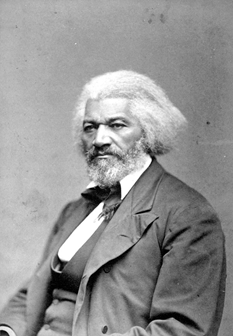 At a New York celebration on July 5, 1852, seventy-six years after the adoption of the Declaration of Independence, the keynote speaker stated, “This Fourth of July is yours, not mine, you may rejoice, I must mourn." Born into slavery in 1818, Frederick Douglass escaped slavery, becoming a widely respected orator devoted to human rights and equality. Addressing the hypocrisy of the Nation's ancestors in what would become his most famous speech, he asked, "Fellow-citizens, pardon me, allow me to ask, why am I called upon to speak here today? What have I, or those I represent, to do with your national independence? Are the great principles of political freedom and of natural justice, embodied in that Declaration of Independence, extended to us? And am I, therefore, called upon to bring our humble offering to the national altar, and to confess the benefits and express devout gratitude for the blessings resulting from your independence to us?"  Viewing the Emancipation Proclamation of 1863 as a positive yet incomplete redress of American principles, Douglass continued his work until he died in 1895.

Richard Nixon and the Spirit of 1976 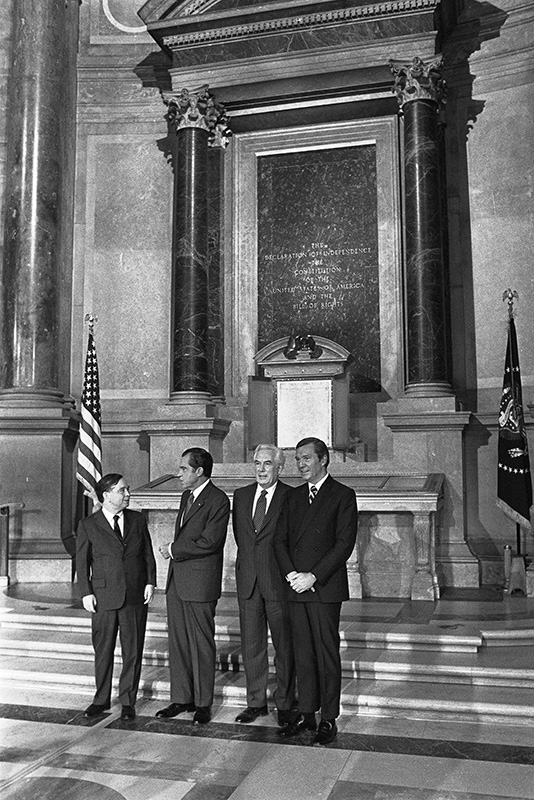 Richard Nixon had a five year plan to prepare a grand celebration for the Nation's bicentennial celebration. The President, joined by Chief Justice Warren E. Burger, Bicentennial Commission chairman Daniel Mahoney, and House Speaker Carl Albert, made the official announcement, opening the Bicentennial Era on July 3, 1971, in the Rotunda of the National Archives building. Designating the next five years as “a time for Americans to review and reaffirm the basic principles the nation was founded on.” Moreover, it provided context to the administration's goal of forging “a new national commitment, a new spirit for 1976, a spirit which vitalizes the ideals for which the Revolution was fought; a spirit which will unite the nation in purpose and in dedication to the advancement of human welfare as it moves into its third century.” 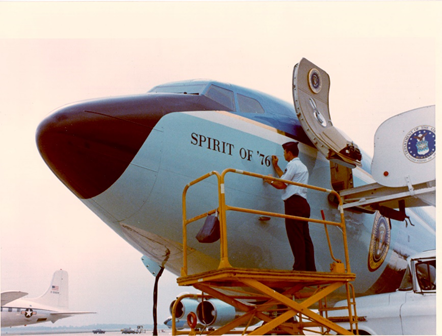 In preparation for the upcoming bicentennial celebration, Air Force One was painted with the "Spirit of '76." (Image: WHPO-6877-07)

Elected to his second term, Nixon’s July 4, 1972 address to the Nation highlighted how his administration planned to coordinate the national celebration. The three interrelated programs originated by the American Revolution Bicentennial Administration, an independent body created by Lyndon Johnson in 1966 and restructured by Nixon in 1974, were Heritage '76, Horizons '76, and Festival USA. Heritage '76 looked to the past and focused on the Nation's history, Horizons '76 involved looking forward and setting goals that citizens would work in unison to accomplish, and Festival USA focused on hospitality between the American people and those visiting from abroad. During the speech President Nixon expressed, “My deepest hope for the Bicentennial Era is this: that all America and all the world can earn the name which Mrs. Nixon and I have chosen for our house here at San Clemente--’La Casa Pacifica,’ the House of Peace--and that the American people can open their arms to the people of the world with the traditional Latin welcome, ‘Estan ustedes en su casa,’ you are in your own house. Let America be known throughout the world as the ‘Land of the Open Door.’'  Richard Nixon envisioned the Spirit of ‘76 creating an era of “openness, brotherhood, and peace.” 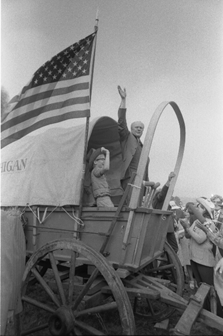 After President Nixon resigned from office in 1974, President Ford carried on Nixon’s vision for the Nation’s bicentennial celebration. Locally sponsored events highlighted the Nation's diversity and fireworks filled the night sky. Bicentennial celebrations across the United States included chili cookoffs, shuffleboard competitions, revolutionary reenactments, and crawfish festivals. For more information, access the Bicentennial Times, an in-depth look at the many celebrations held throughout the country.

President Ford wrote in his memoirs, "Rarely in the history of the world had so many people turned out so spontaneously to express the love they felt for their country. Not a single incident marred our festival. The Nation's wounds had healed. We had regained our pride and rediscovered our faith, and in doing so, we had laid the foundation for a future that had to be filled with hope."  The patriotism displayed on July 4, 1976, signified the recovery and rebirth of our Nation. 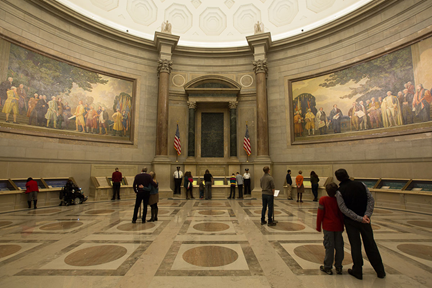 Founded in 1934, the National Archives and Records Administration (NARA) cares for and preserves the records of the United States Government. On December 13, 1952, the Declaration of Independence traveled to its intended resting place in the National Archives Rotunda. The Charters of Freedom, consisting of the Declaration of Independence, the Constitution, and the Bill of Rights, are on display and accessible daily.