Former President George H. W. Bush has died at the age of 94. The nation's longest-lived President passed away peacefully at home in Houston, Texas.

George Herbert Walker Bush was known for his humor, loyalty, and sense of duty. Following the attack on Pearl Harbor, he volunteered for the United States Navy on his 18th birthday. At 19, having completed 10 months of training, Ensign Bush became one of the Navy's youngest aviators. He served with great courage in the Pacific Theater and received the Distinguished Flying Cross and a Presidential Unit Citation. He resigned from the Navy Reserve in 1955 with the rank of Lieutenant.

Following his military service, he married his sweetheart Barbara Pierce whom he had met at a Christmas dance when he was 17 and she was 16. On January 6, 1945, they were wed. Former First Lady Barbara Bush preceded her husband in death in April of this year. During their 73-year marriage, the Bushes had six children. The Bush family experienced the heartbreaking loss of their daughter Pauline Robinson ("Robin") to leukemia at the age of three.

After nearly 20 years of working in the oil industry, Mr. Bush entered politics. His father, Prescott Bush, had recently retired from public service as a United States Senator representing Connecticut. With an aim to follow in his father's footsteps, the younger Bush ran for the Senate in 1964 but was defeated. Two years later he was elected to the House of Representatives. He served two terms as Congressman representing Texas' 7th District before again being defeated in a run for the Senate. In 1971, President Nixon appointed Mr. Bush as Ambassador to the United Nations. Ambassador Bush became Chairman of the Republican National Committee in 1973. In 1974, President Gerald Ford appointed Mr. Bush as the Chief of the Liaison Office in China. He then served as Director of the Central Intelligence Agency for one year beginning in January 1976.

He served as Vice President to President Ronald Reagan for two terms before being elected to the country's highest post in 1988. His term as President ended in 1993 after having been defeated in his bid for reelection by William Jefferson Clinton. The two political foes went on to become close friends who worked together on humanitarian causes such as aid to those devastated by the tsunami that struck southeast Asia in 2004 and Hurricane Katrina in 2006. Indeed, as a senior statesman, the former President would become a valued friend to those who served as President. To learn about President Bush's time in office and enduring legacy, we recommend visiting the website of the George Bush Presidential Library and Museum at https://georgehwbush.com/ 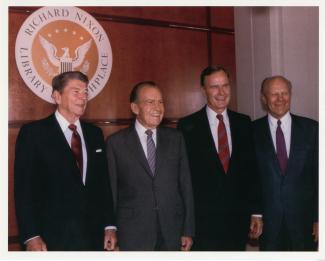 Following his career in public service, former President Bush authored several books including his autobiography Looking Forward; A World Transformed; and All the Best, George Bush: My Life in Letters and Other Writings. He also coauthored or contributed to a number of additional books.