51st Anniversary of the Release of the Pentagon Papers

51st Anniversary of the release of the Pentagon Papers 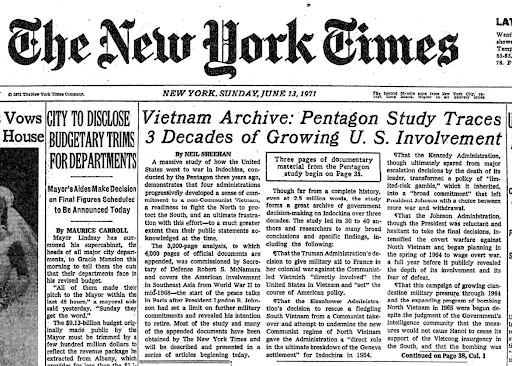 Monday, June 13, 2022, marks the 51st anniversary of the New York Times publication of the Pentagon Papers. The release affected the legacies of four presidential administrations and became the catalyst for the Watergate break-in and subsequent scandal. 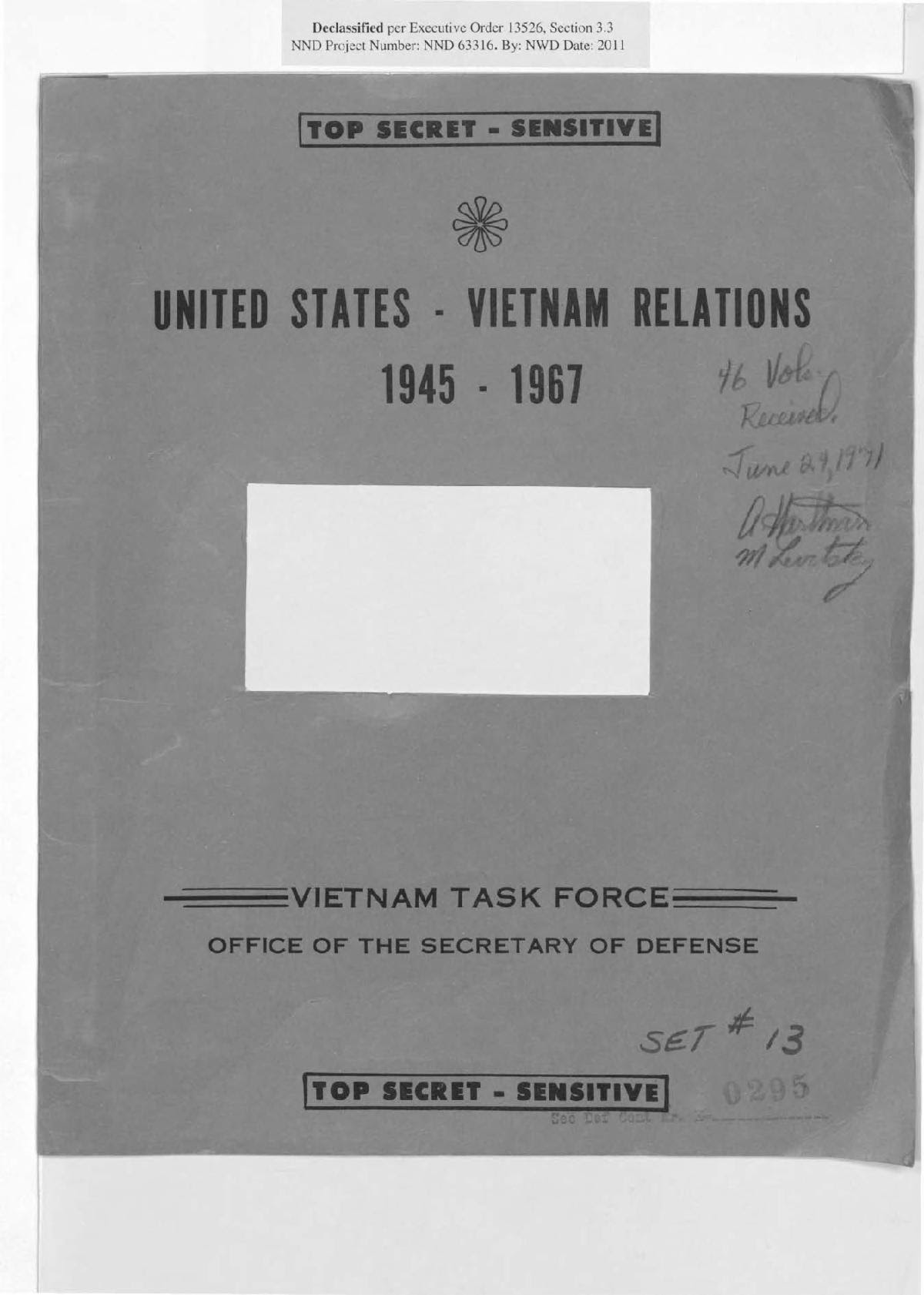 The Report of the Office of the Secretary of Defense Vietnam Task Force was a 7,000-page, 47-volume Top-Secret Vietnam War study commissioned by Robert McNamara, Secretary of Defense for the Johnson administration. Later known as the Pentagon Papers, the report documented the United States' involvement in Southeast Asia from 1945 to 1967. Half of the 36 analysts hired to work on the Pentagon Papers were active-duty military officers, while the other half split between federal civilian employees and professional scholars. In 1969, five days before Richard Nixon's inauguration, the Vietnam Study Task Force completed the report. Chronicling decades of failed U.S. policy and the scope of ever-expanding military involvement, the study revealed that the Truman, Eisenhower, Kennedy, and Johnson administrations had misled the public about the extent of the Nation's involvement in Vietnam. On June 17, 1971, a Washington Post editorial described the Pentagon Papers release as irrefutable documentation that was incredibly damning. 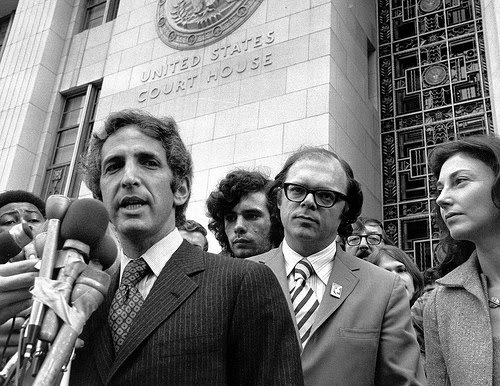 As one of the 36 analysts hired to work on the Pentagon Papers through the RAND Corporation, Dr. Daniel Ellsberg became disillusioned with the war effort. He and colleague Anthony J. Russo, Jr. decided to copy the research and began sharing it with the antiwar politicians in the U.S. Senate. When official channels failed, Ellsberg contacted Neil Sheehan of the New York Times and met with the reporter in March 1971. The Federal Government charged Ellsberg and Russo with violating the Espionage Act of 1917; their trial began in Los Angeles on January 3, 1973. Federal judge William M. Byrne, Jr. dismissed the case against both men after the exposed governmental misconduct and illegal evidence gathering tied to the Fielding Break-In. 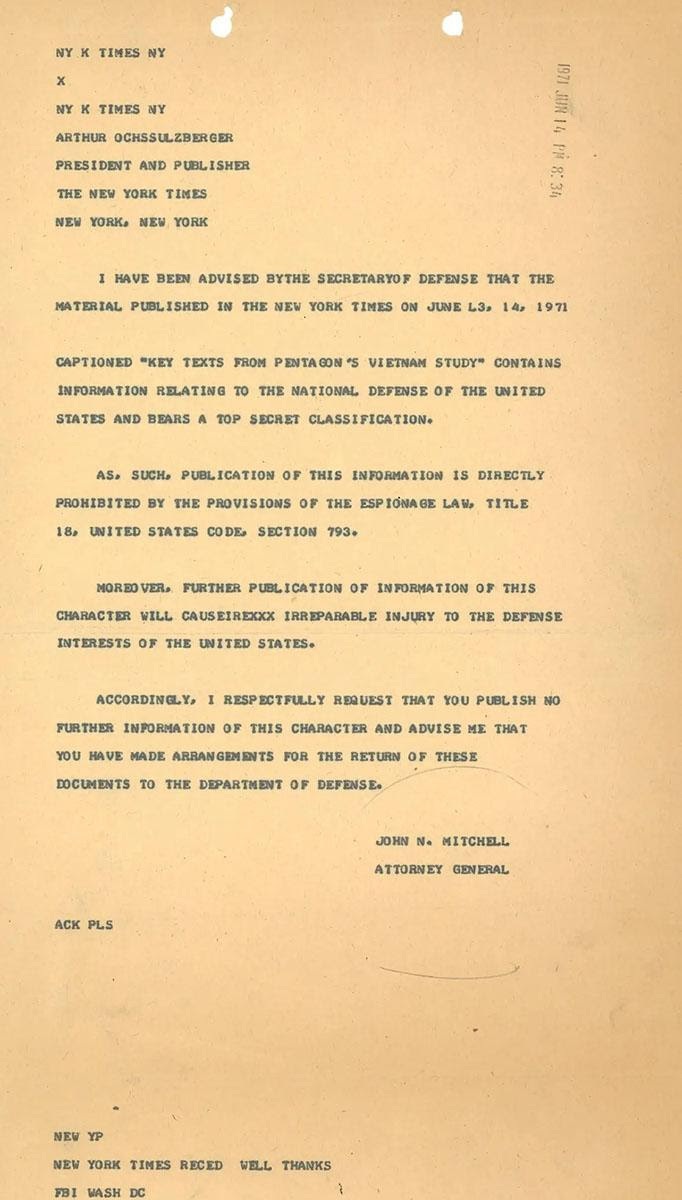 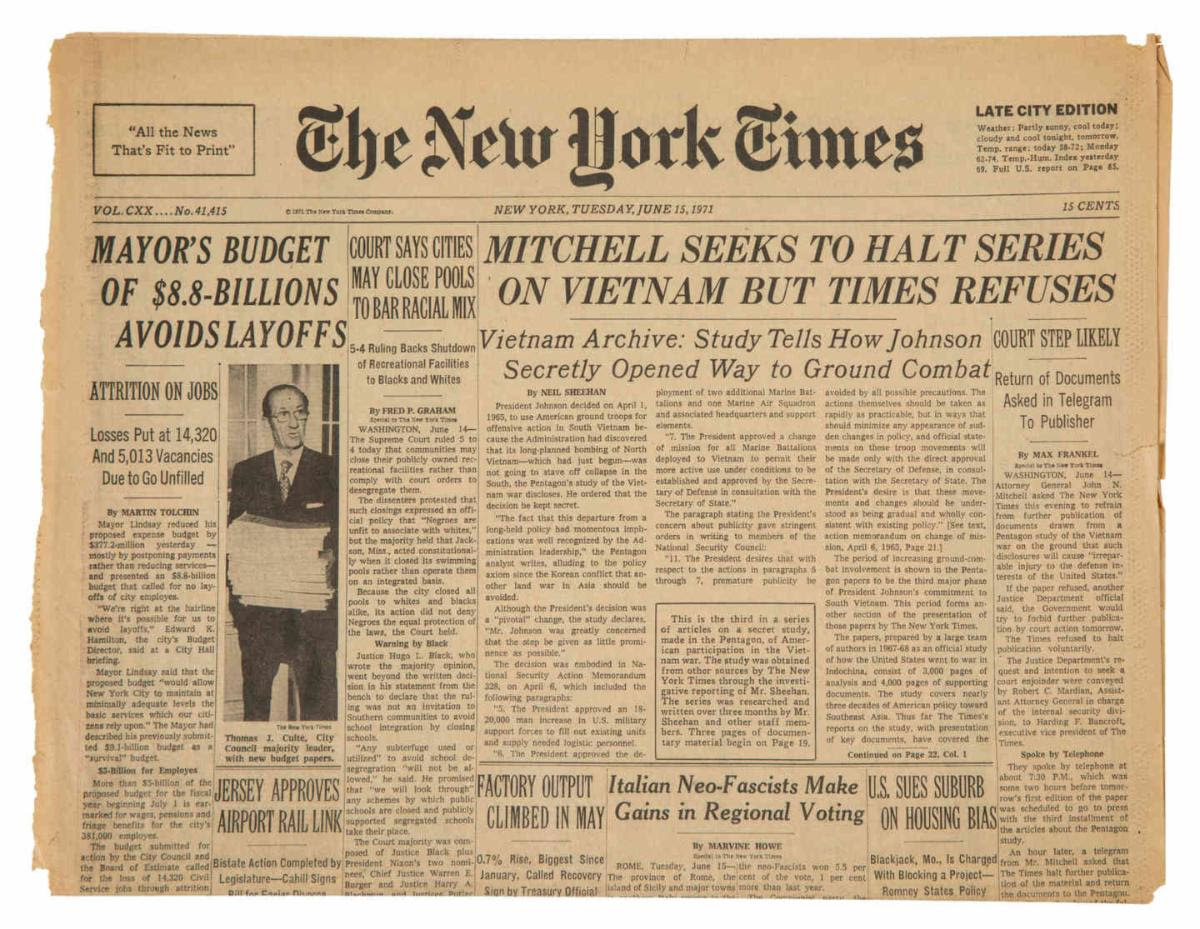 The front page of The Times on June 15, 1971, featuring the paper’s refusal to comply with the attorney general’s telegram, right above the third installment of the Pentagon Papers. Credit: The New York Times Corporate Archive

United States Attorney General John Mitchell issued a temporary restraining order and later an injunction furnished by the Department of Justice that prevented the further release of the classified material. The court order against the publication stated that further public distribution of classified materials threatened national security. The New York Times and many other publications refused and, in the following cases, argued that the "media's use of classified government information was not only routine but was essential to the operation of a free press." New York Times Co. v. The United States made its way to the Supreme Court, and oral arguments based on prior restraint began on June 26, 1971. On June 30, 1971, the Supreme Court 6-3 decision in favor of the New York Times liberated the media to start publishing unfettered. 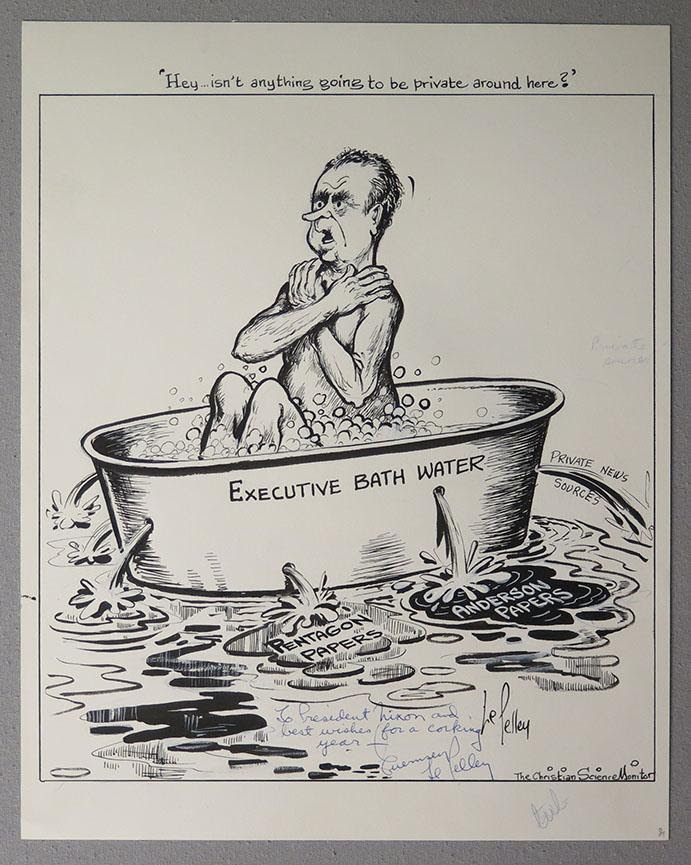 The media's continued publication of classified documents revealed Ellsberg had access to confidential matters well beyond the study, which increased paranoia in the Nixon administration. To stop these leaks, President Nixon tasked his staff to create the White House Special Investigations Unit, known as The Plumbers. Egil Krogh, David Young, E. Howard Hunt, and G. Gordon Liddy worked with agencies to investigate and interview for confidential leaks. Other tactics utilized by The Plumbers included burglary, bugging, and intimidation. Operations began with the Fielding Break-In and culminated in two break-ins at the Democratic National Committee headquarters located in the Watergate complex. Eventually, the Watergate scandal and the attempted cover-up led to President Nixon's resignation. 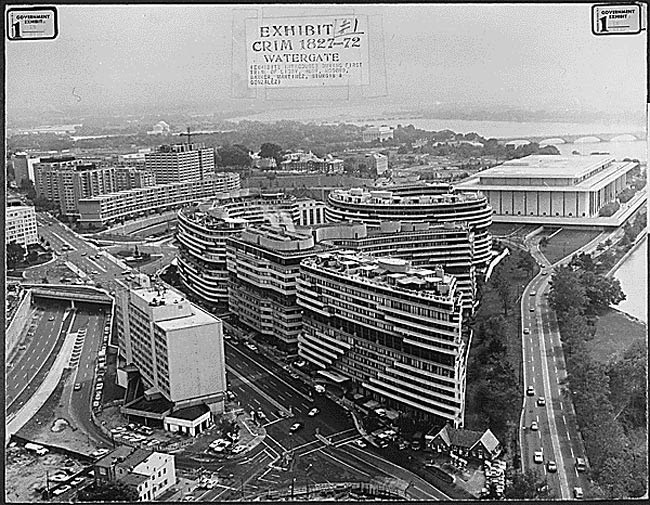 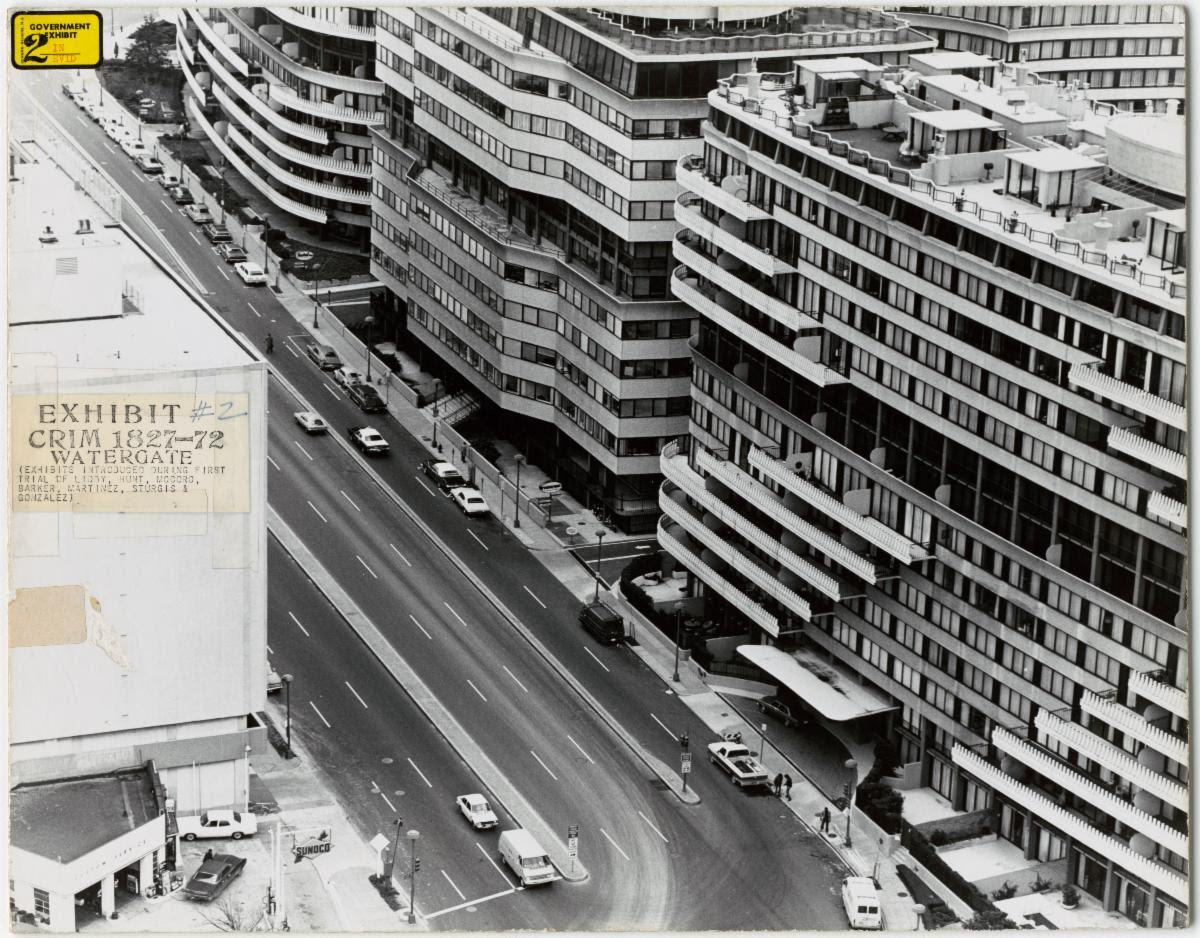 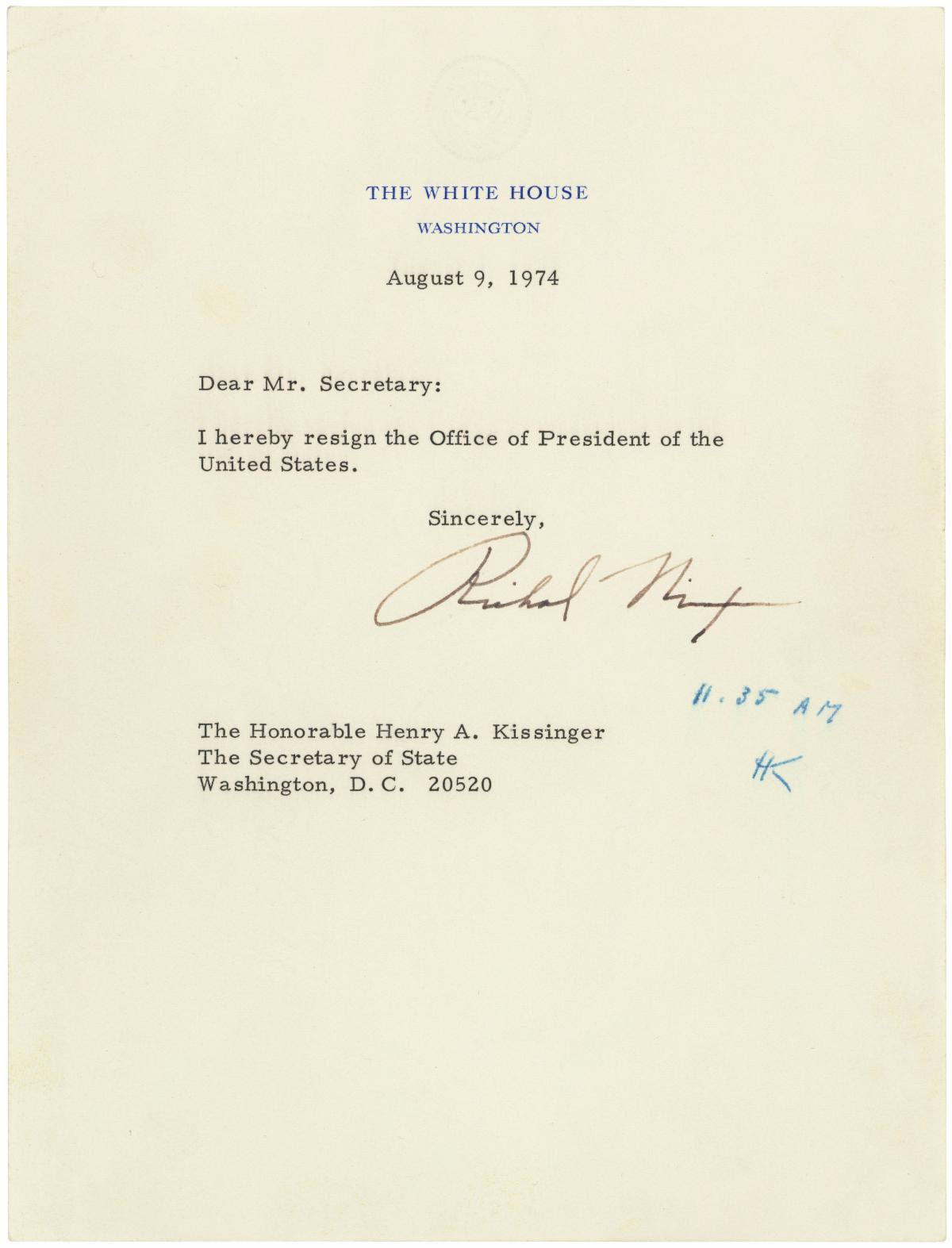