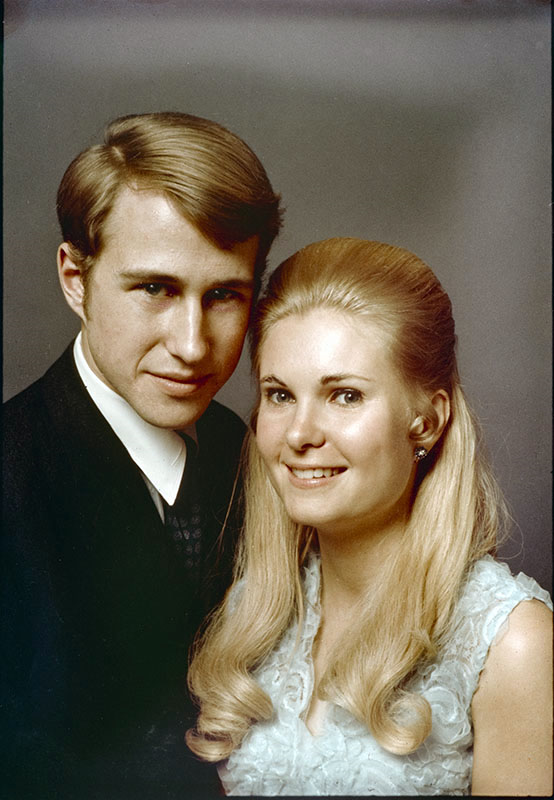 Saturday, June 12, 2021, marks the 50th wedding anniversary of Tricia Nixon and Edward Cox. Theirs was the first wedding ceremony held outdoors in the White House Rose Garden and one of the most widely documented. Articles abound about this historical White House wedding, the couple’s courtship, cake recipe, dress design, ceremony and wedding reception particulars. The Life magazine cover below is one of the many magazines that featured Tricia on the cover. 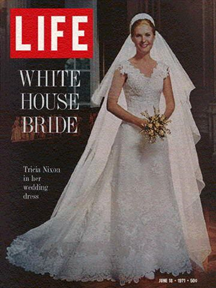 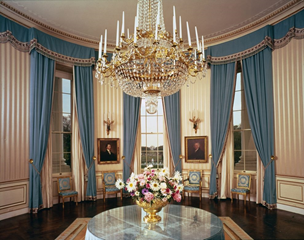 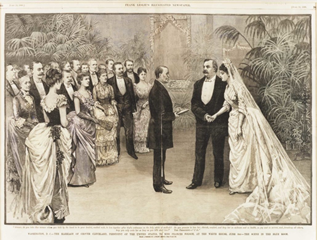 Grover Cleveland and Frances Folsom are married in the Blue Room, 1886. Library of Congress.

There have been eighteen documented weddings held in the White House since 1812. Weddings have been held in the Blue Room, East Room and beginning with Tricia and Edward, the Rose Garden.

Inspired by the gardens visited while traveling through Europe, President Kennedy had ordered a complete redesign of the Rose Garden in 1961. The vision for the garden included a “50-by-100-foot lawn, large enough to accommodate a thousand people for ceremonial activities and receptions and small enough to be covered by a tent, would be in the center of the garden.” Prior to its redesign, the area’s uses included a stable yard, a vegetable garden, a greenhouse, and a colonial garden. The remodel added magnolia trees to define the four corners of the garden. It also intermingled the established rose plants with a variety of flowers used during Thomas Jefferson's administration. This transformation made the Rose Garden an ideal location for outdoor events. 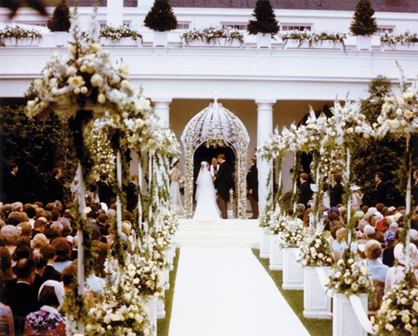 The wedding of Tricia Nixon and Edward Cox in the White House Rose Garden. Photograph courtesy of the Richard Nixon Foundation. 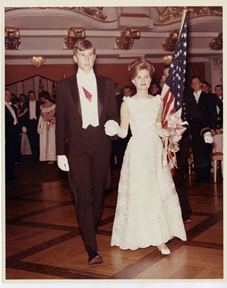 The couple first met at the Chapin School Christmas dance in 1963. The following year, Edward escorted Tricia to the International Debutante Ball. Dating throughout college, they were secretly engaged for two years prior to Edward asking the President for his daughter’s hand in marriage in November of 1970. The official engagement was announced at a gala affair held to celebrate Pat Nixon’s 59th birthday. Originally, the wedding was planned for June 5th, but since it fell so close to Edward’s Harvard law school exams Tricia and Edward selected June 12, 1971, as the date of their wedding. A summer date allowed them to have an outdoor wedding in the Rose Garden. 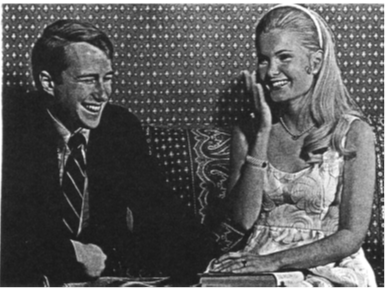 The happy couple in the Lincoln Sitting Room, where Edward proposed to Tricia. Photograph taken from a Time magazine article dated June 14, 1971.

The Dress, the Ring, and Traditions 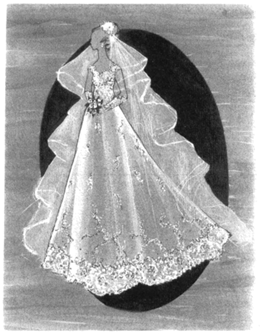 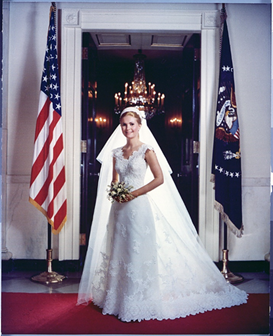 Priscilla Kidder (Priscilla of Boston) designed, with the bride’s influence, a confection of silk organdy, lace, silk crepe, and embroidered lilies. The gown maker, who in the past had created wedding dresses for Julie Nixon and Luci Baines Johnson, also designed dresses for the bridesmaids and the mother of the bride.

Beginning in March and until June 12, 1971, the White House issued detailed press releases sharing information about the upcoming nuptials. These releases included the particulars regarding the place settings, dinner menu, wedding party outfits, and gifts. Details released to the press in the days leading up to the wedding are shown below. 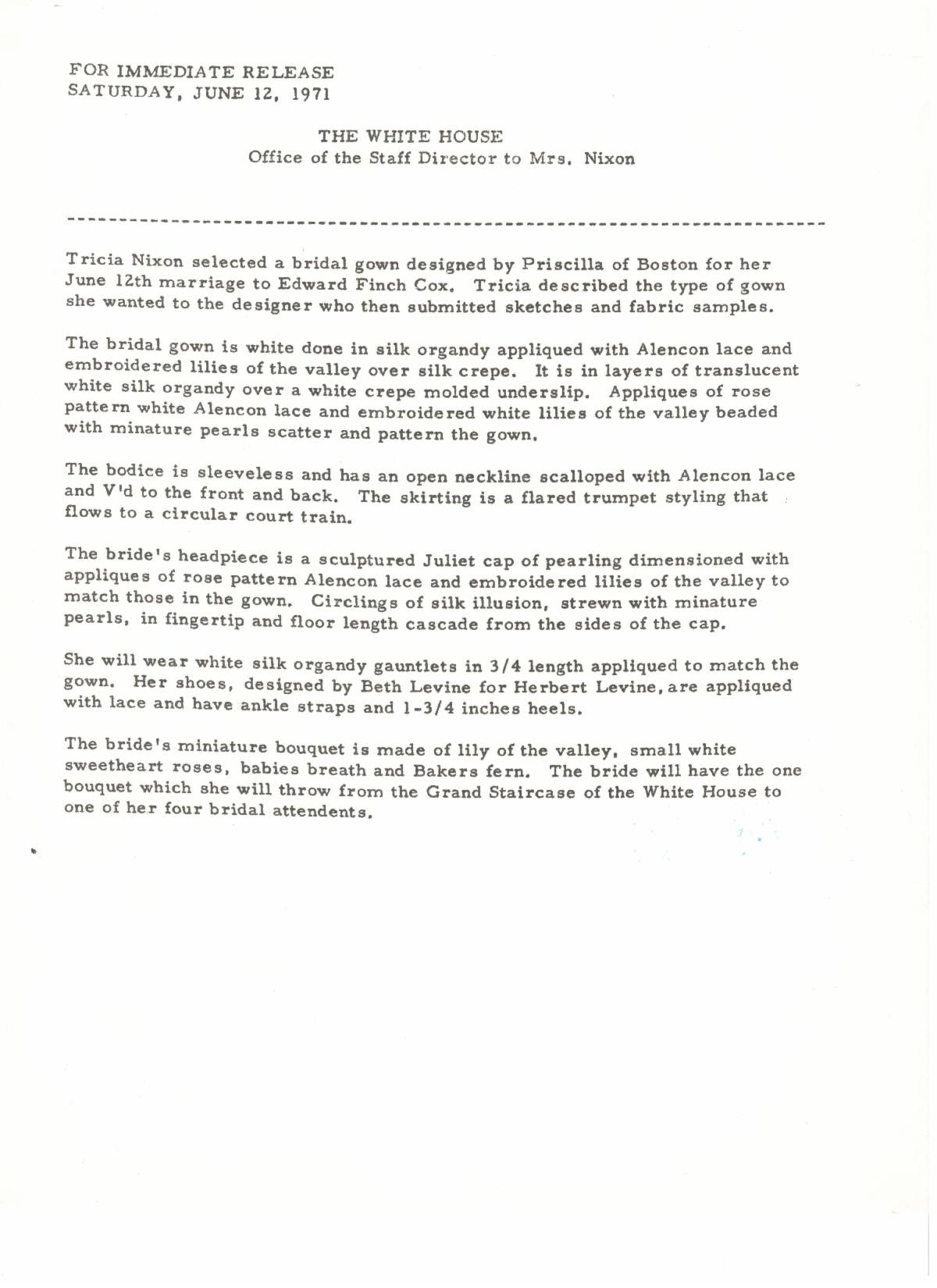 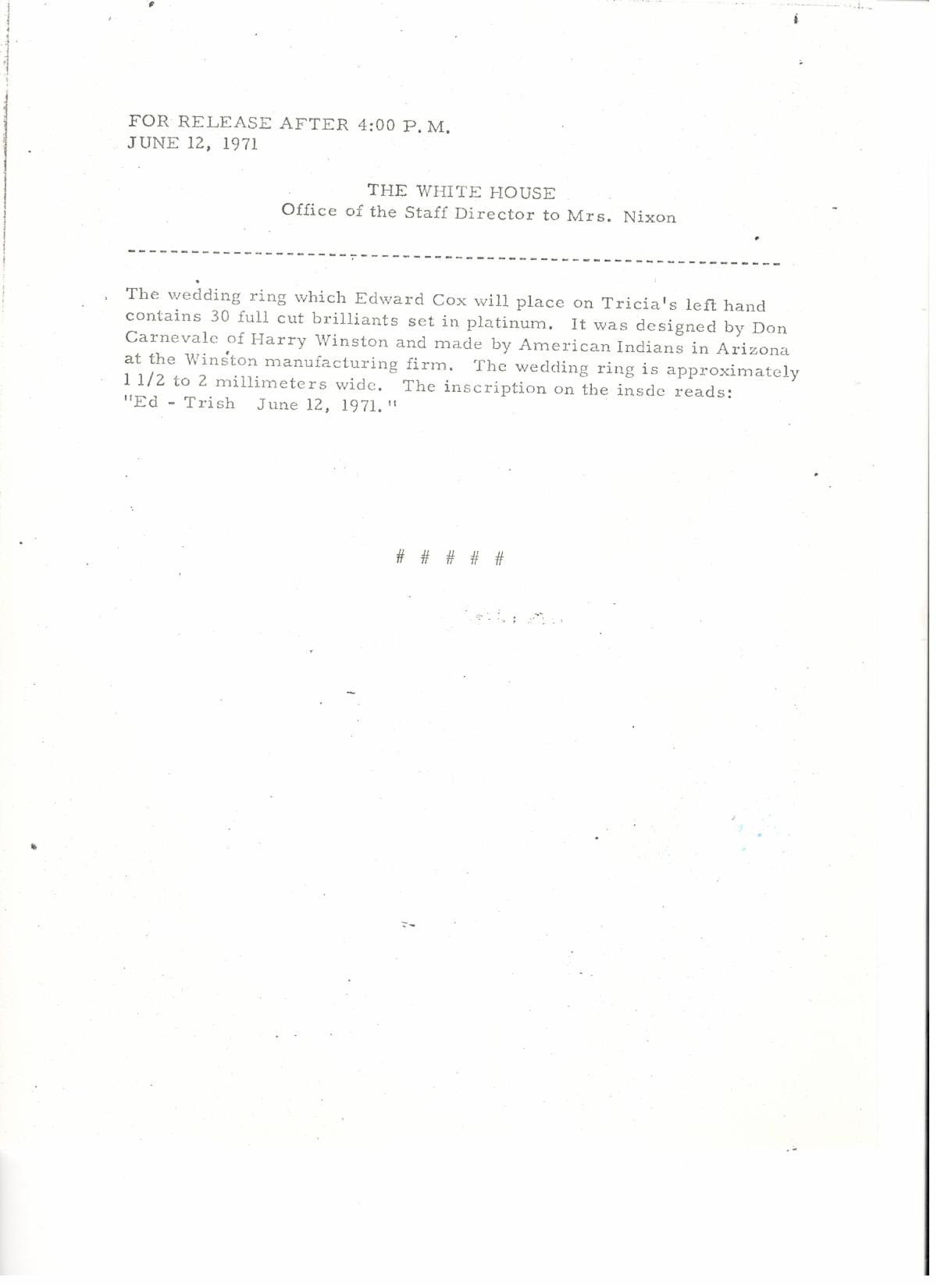 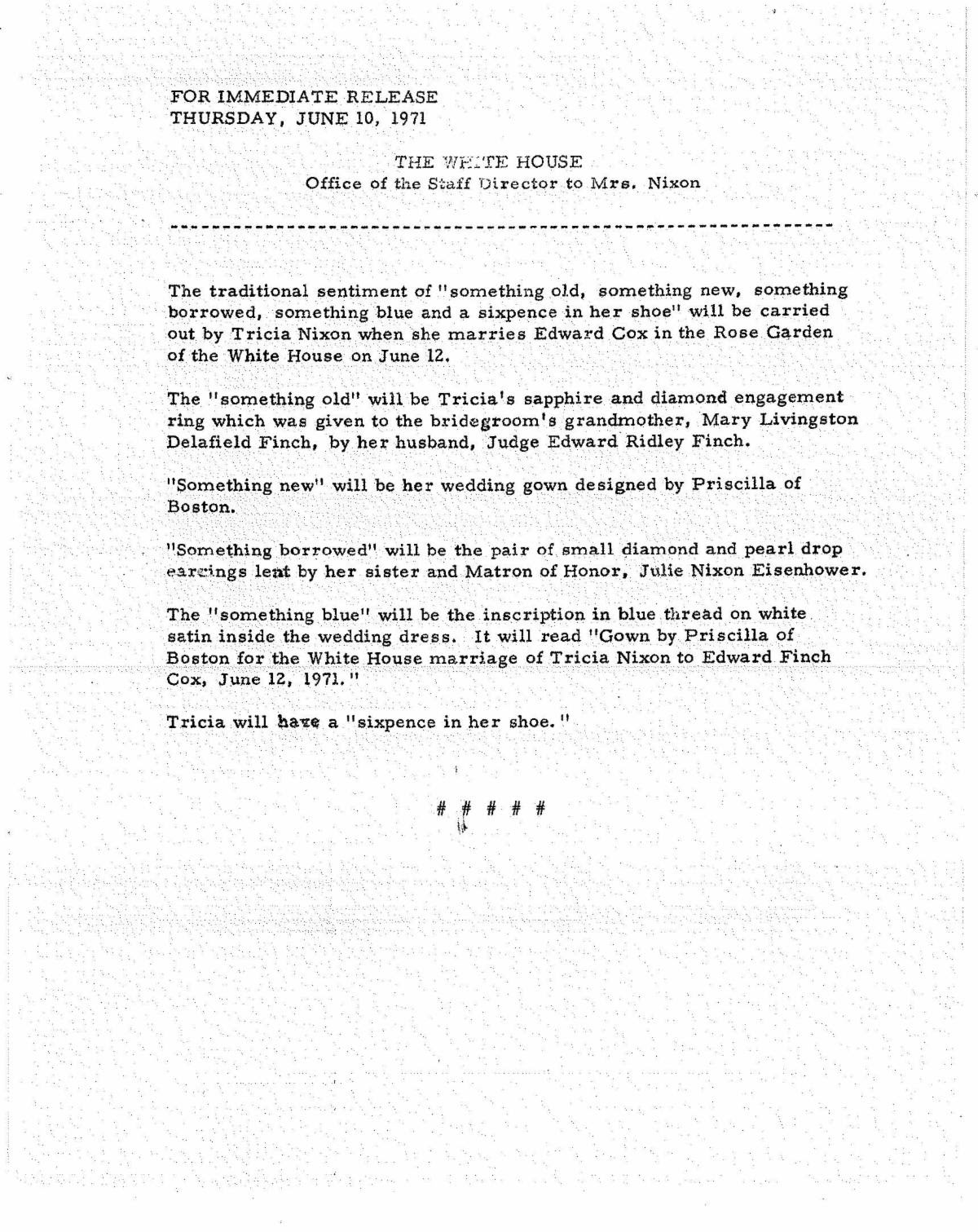 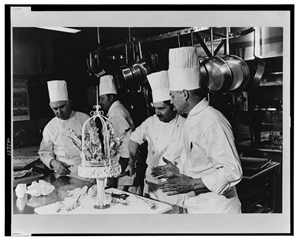 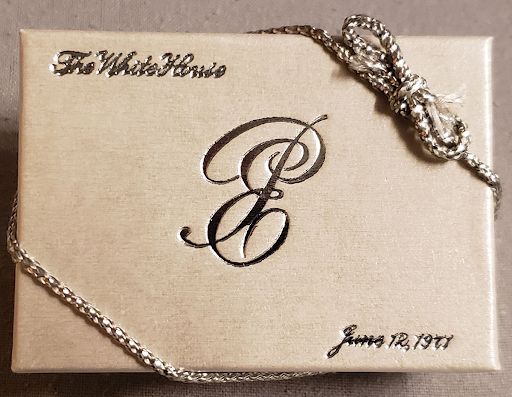 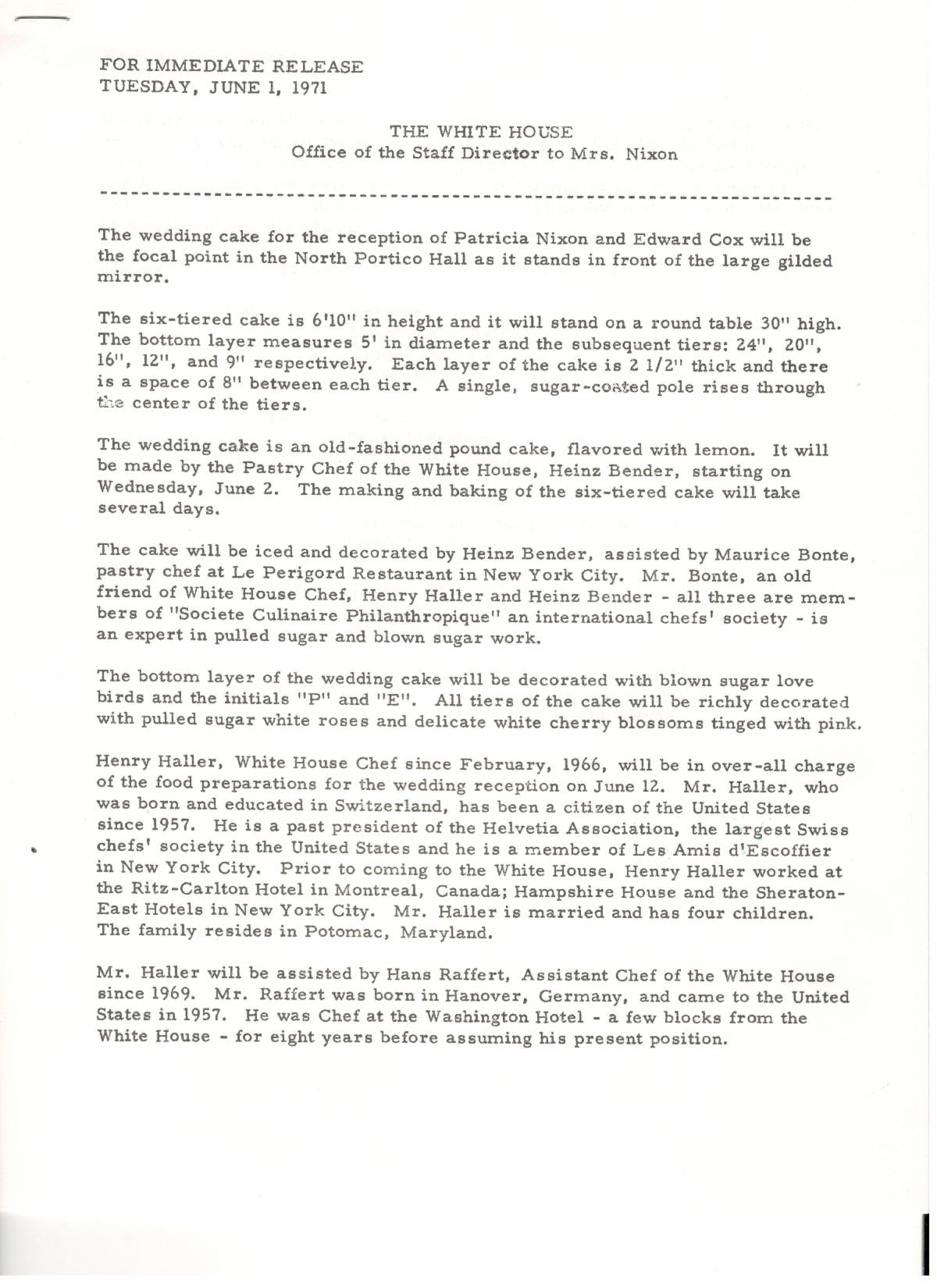 The focal point of the reception was an old-fashioned lemon pound cake, a recipe that Tricia found in Pat Nixon’s recipe box. Instead of the traditional bride and groom figurines that typically top a wedding cake, the betrothed selected a decorative top tier that featured a miniature gazebo modeled after the gazebo that the couple would soon exchange their vows under in the White House Rose Garden.

Standing 6’10” tall and consisting of six layers, including a 64” diameter base layer, it took White House Pastry Chef Heinz Bender several days to bake and decorate. The cake recipe, which was included in this White House press release, proved problematic for home bakers, according to this New York Times article published in 2016. Fortunately for the couple and their guests, the Times deemed the actual wedding cake “elegant and edible” in the coverage of their wedding. 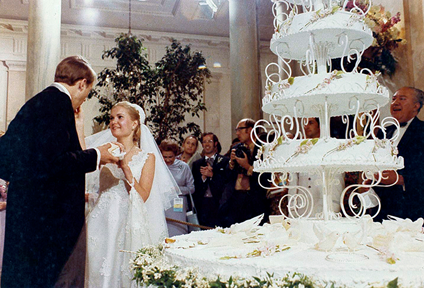 The Ceremony and Reception 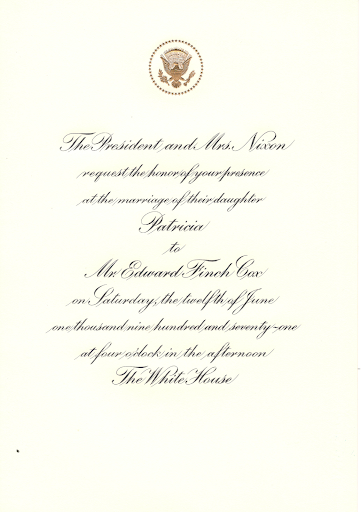 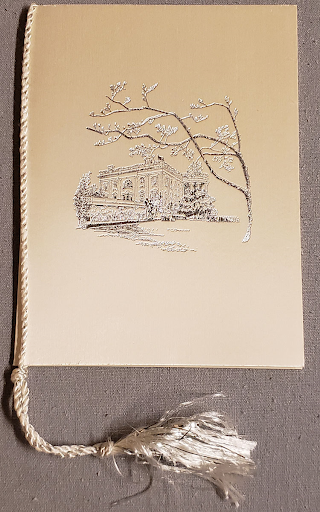 Due to the unpredictable summer weather in Washington, DC, contingency plans were put in place. There was a Good Weather Plan (a Rose Garden Ceremony) and a Bad Weather Plan (an East Room Ceremony). The morning of June 12, 1971, was overcast and rainy but the skies cleared in the afternoon. At just after half past four, with blue skies and 400 people in attendance, the wedding procession began. President Nixon, attired similarly to the bridegroom in an Oxford grey formal cutaway, striped trousers, and black and white striped ascot, walked the bride down the aisle. 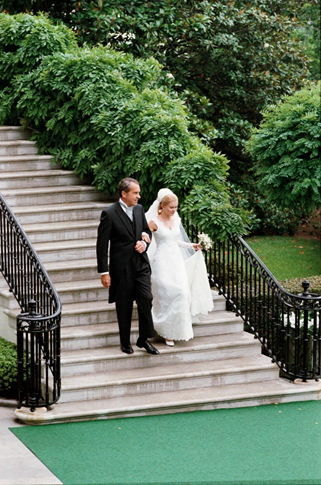 Following the ceremony, the wedding party and guests celebrated inside the White House. The State Dining Room and East Room provided ample space for the buffet reception and dancing.

The ceremony and festivities that followed can be viewed in recorded footage and are summarized in this 1971 White House pamphlet below. 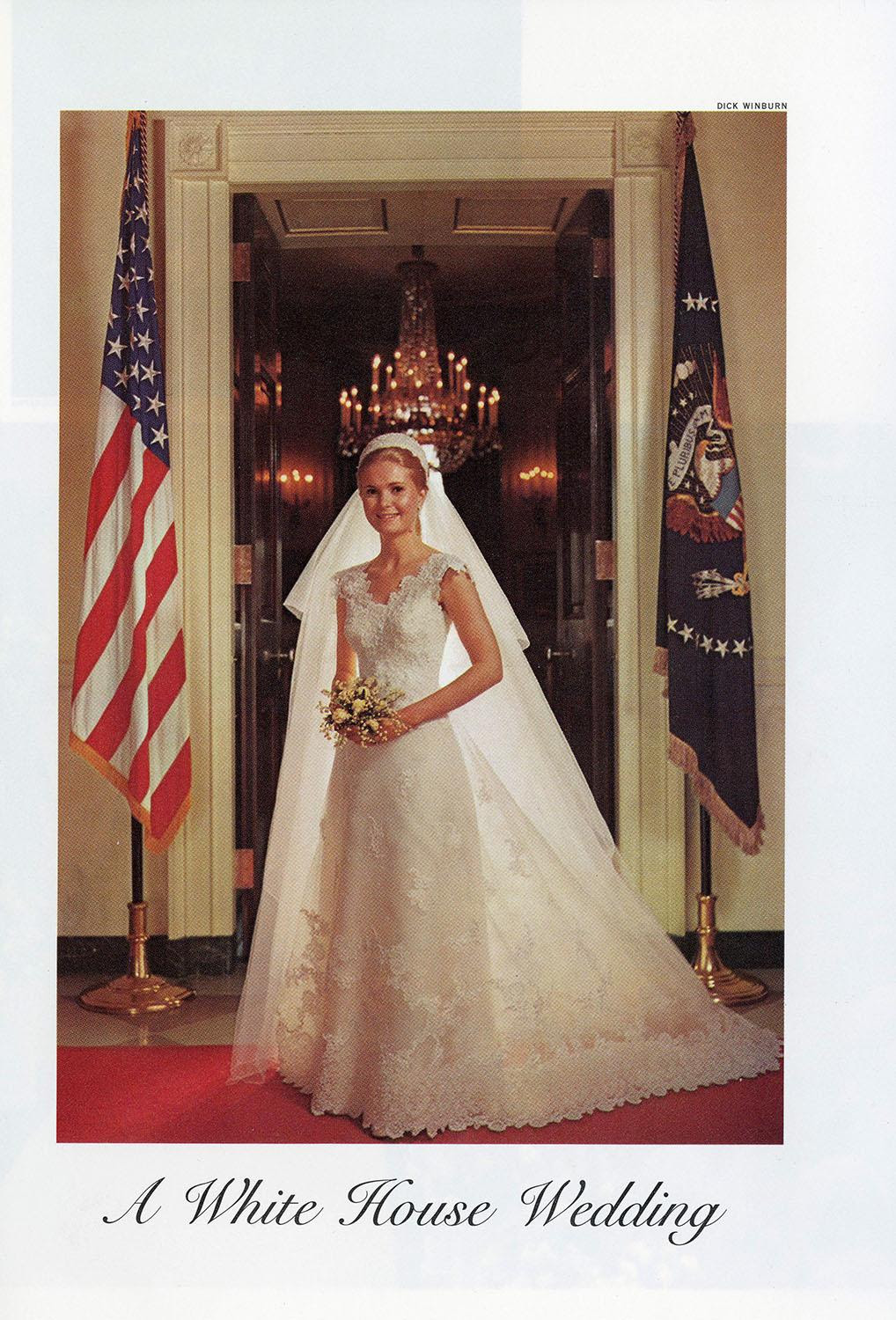 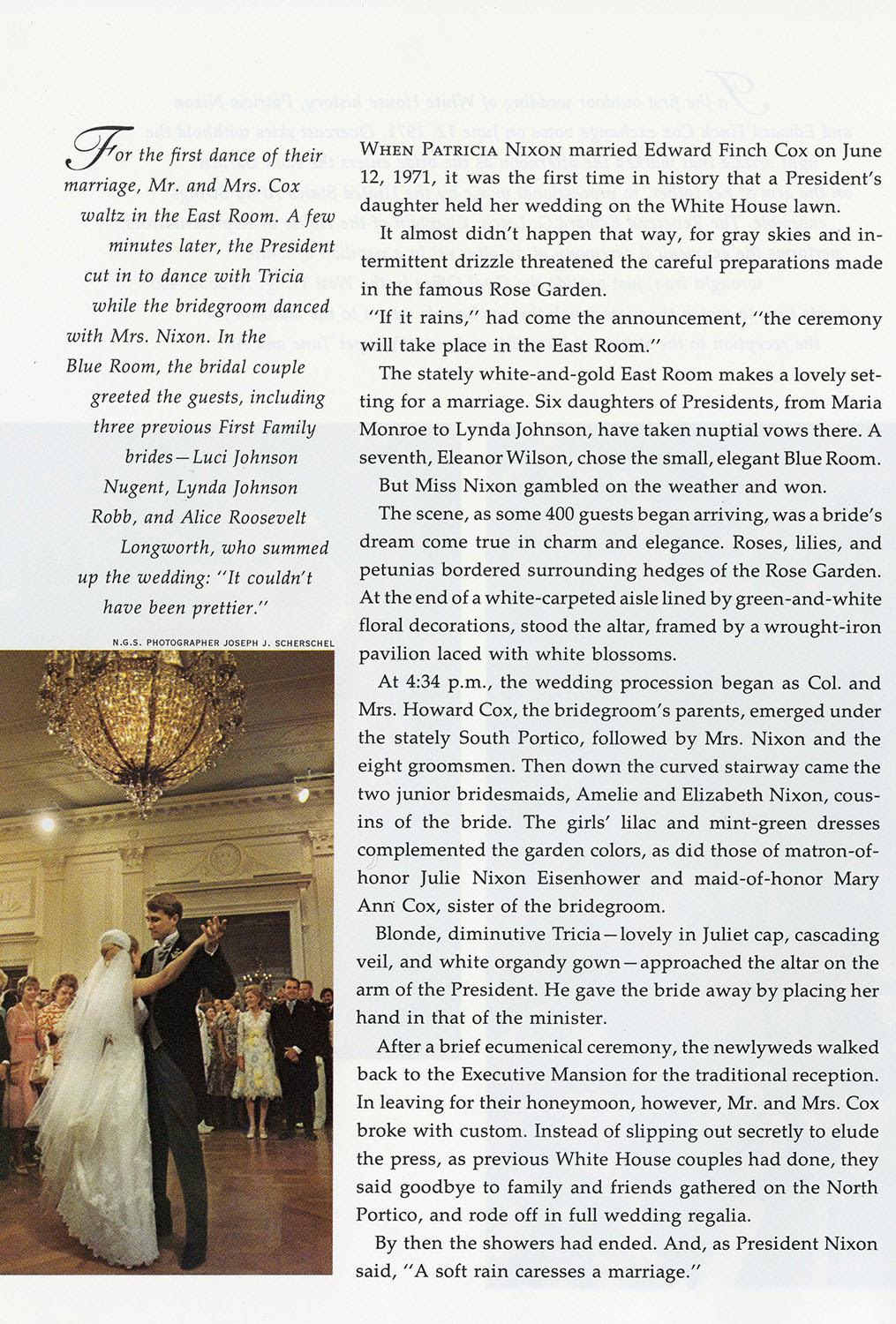 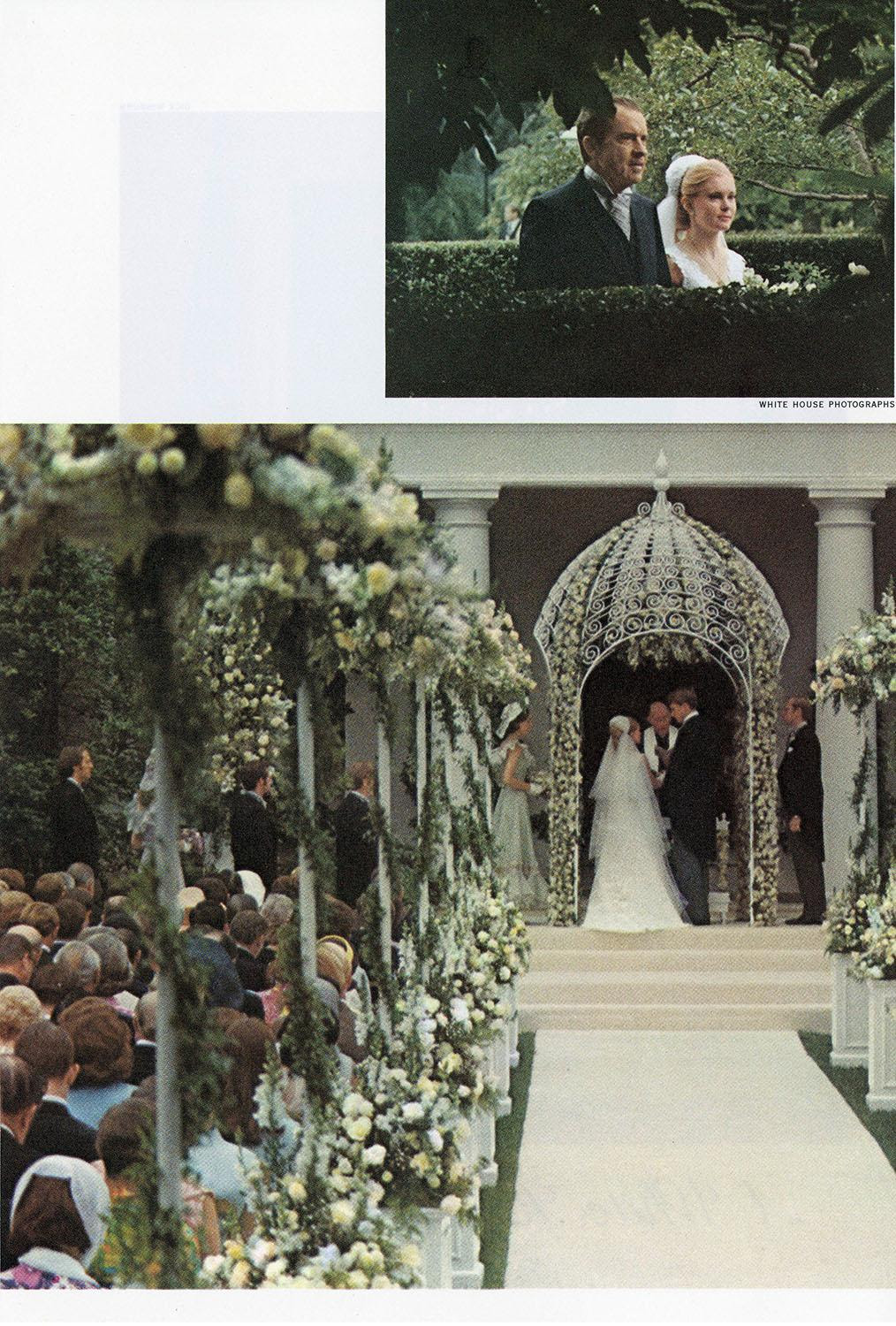 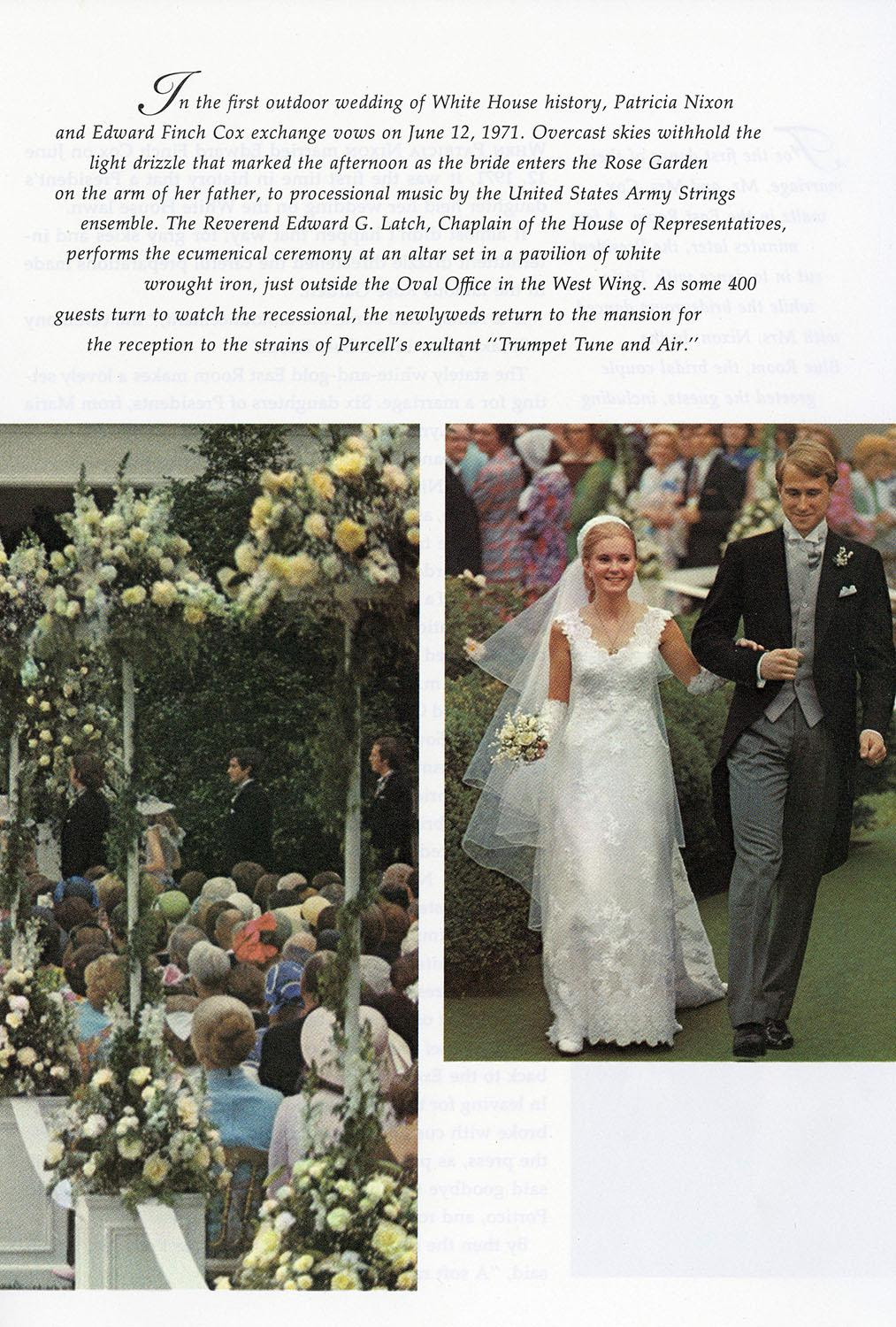 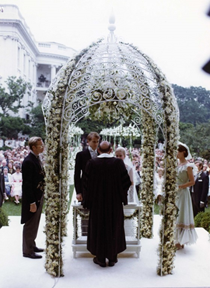 Edward and Tricia reciting their vows under the Gazebo. Photograph courtesy of the Richard Nixon Foundation. 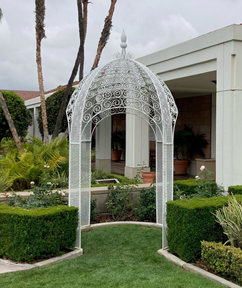 The original Gazebo today is located in the garden of the Richard Nixon Presidential Library and Museum in Yorba Linda, CA.

The Gazebo under which Tricia and Edward were married in the White House Rose Garden on June 12, 1971, now resides near her father’s childhood home on the grounds of the Richard Nixon Presidential Library and Museum in Yorba Linda, California.

The National Archives staff at the Nixon Library congratulate Tricia and Edward on their golden wedding anniversary and wish the couple a lifetime of happiness together.