Presidential Libraries give visitors opportunities to dive into history with all their senses. The museum curators and archivists are charged with the maintenance and safekeeping of photographs, audio recordings, textual records, and artifacts all pertinent to a President's administration and the era surrounding it. The mission of the National Archives is to

Many of the artifacts, photographs, and documents in this sneak peek pertain to gifts received during Richard Nixon's presidency both as diplomatic gestures and from private citizens. 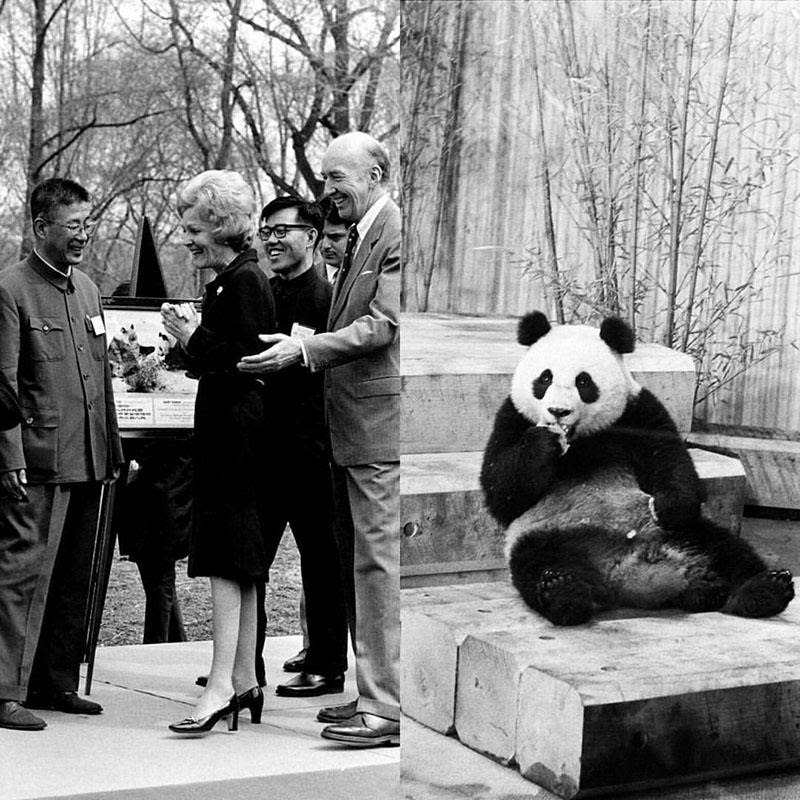 During President Nixon’s trip to China in 1972, Pat Nixon so admired the panda bears she was shown that the Chinese government gifted the United States with Ling-Ling and Hsing-Hsing. They arrived at the National Zoo in April 1972. First Lady Pat Nixon formally welcomed the pandas on April 20, 1972. (WHPO-8931-15 and 33)

Gift exchanges between heads of state date back to ancient civilizations on every continent. These expressions of goodwill “capture the essence of a nation, chosen for its ability to exhibit pride in a unique culture and people.” Our nation’s founders initially viewed these gifts negatively believing them to be representative of the aristocracy. Article 1, Section 9, Clause 8 of the Constitution prohibited anyone in the U.S. Government from receiving a personal gift from a foreign head of state without the consent of Congress believing “a bribe in betrayers' hands could topple a government.” Modern day diplomacy has embraced the tradition and since 1928, a Chief of Protocol Officer and Protocol Gift Unit has been charged with the task of receiving and maintaining records of all diplomatic gifts. The extravagance of some gifts of state prompted the creation of the Foreign Gifts and Decorations Act of 1966 initially capping the dollar amount of gifts received. As of January 2020, anything over $415 “is automatically the property of the people of the USA. The gifts end up in presidential libraries and the National Archives.” If the President wishes to purchase a gift from the government, they may do so at the appraised value of the item.

Past diplomatic gifts have included live animals; Giant Pandas were a gift to President Richard Nixon from the People's Republic of China and a Komodo Dragon was given to President George H.W. Bush from Indonesia. A jewel encrusted sword valued at $8,000 was a gift given to President Obama from Malaysia. He was also the recipient of crocodile insurance from the Chief Minister of Australia's Northern Territory. In 1880, President Rutherford B. Hayes received the Resolute Desk as a gift from Queen Victoria of England, a gift still used in the Oval Office today. Israeli Defense Minister Shimon Peres gifted President Gerald Ford a 1st or 2nd century CE Roman wine/water vessel. Three hundred pounds of raw lamb was gifted to President George W. Bush from Argentina and a Louis Vuitton golf bag valued around $8,000 was given to President Donald Trump during a visit to France. Many diplomatic gifts received during the Nixon Administration (pandas not included) are on display and held in the collection at the Richard Nixon Presidential Library and Museum. 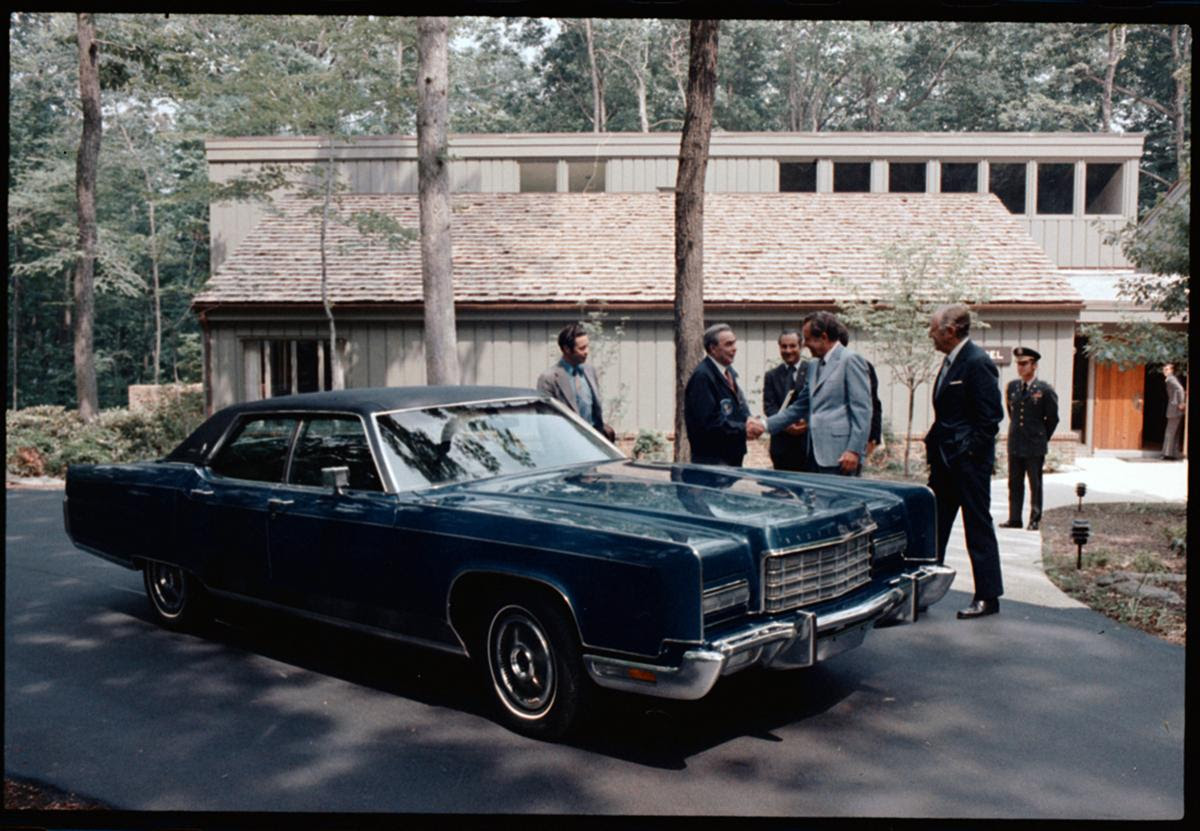 During Soviet General Secretary Leonid Brezhnev's visit to the Presidential Retreat Camp David, President Nixon presented him with a Camp David windbreaker jacket and a brand-new Lincoln Continental in dark blue with black velour upholstery. Nixon wrote about their harrowing spin around the camp with Brezhnev behind the wheel. 6/20/1973. (WHPO-E1046-26A) 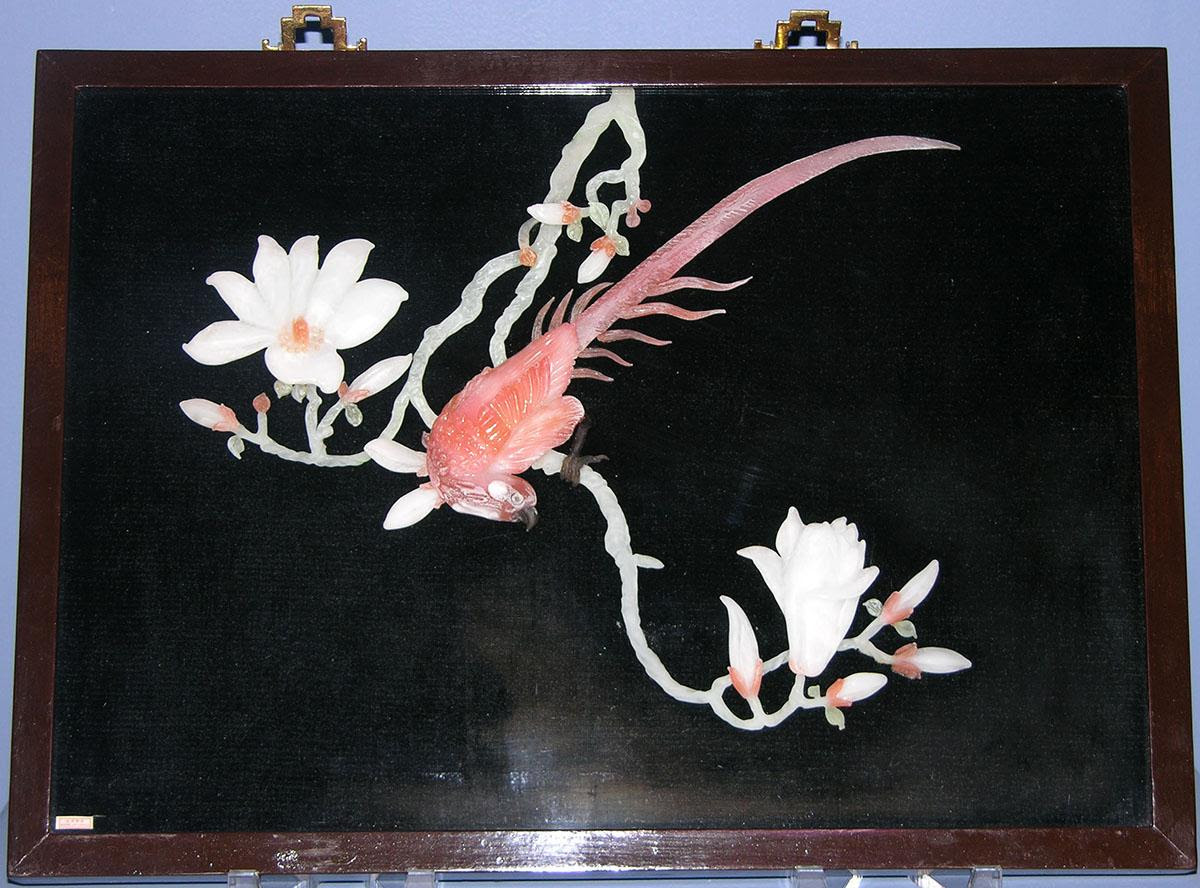 During President Nixon’s February 1972 visit to China, he was gifted this Chinese motif artwork with a bird perching on a branch. In Chinese culture, it symbolizes auspiciousness, a suggestion for future success. Gift of the Government of the People's Republic of China to President Richard Nixon and First Lady Pat Nixon, HS.1972.29 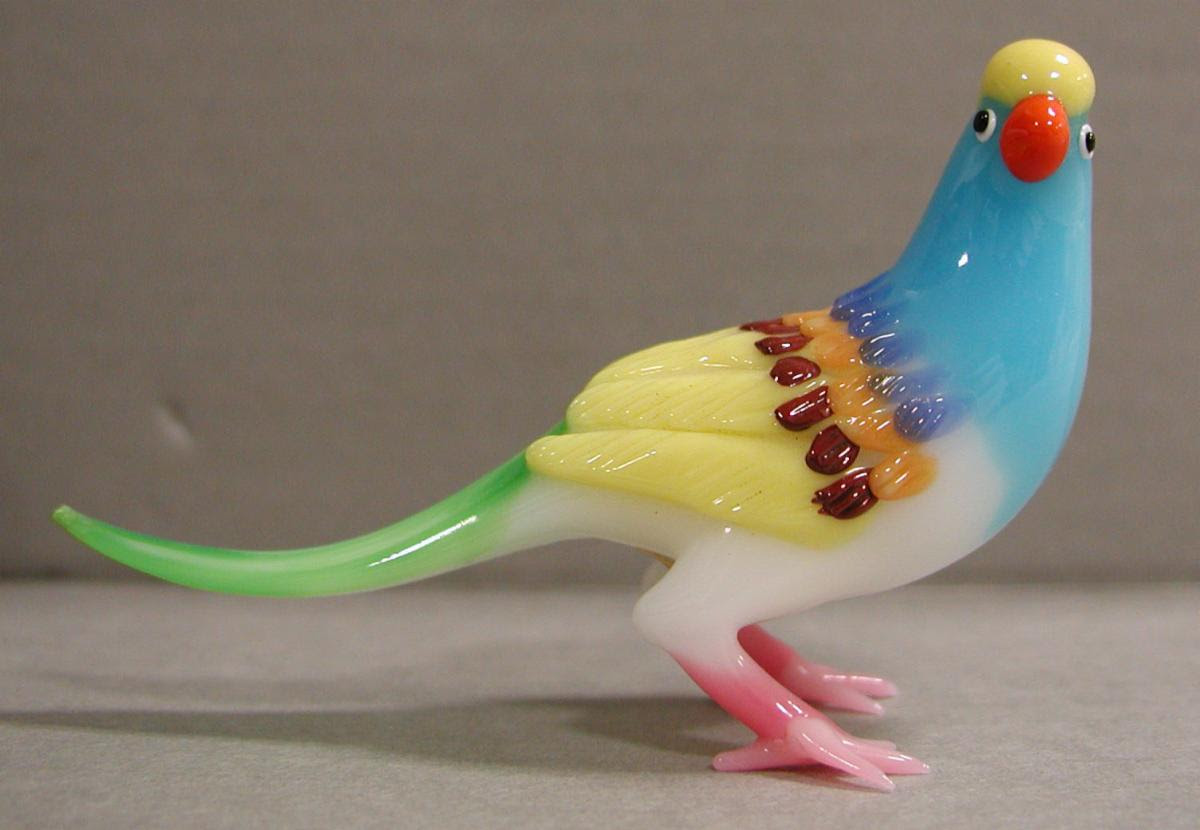 The glass peacock symbolizes beauty and dignity. It was given during President Nixon's February, 1972 visit to China. Gift of the Government of the People's Republic of China to President Richard Nixon and First Lady Pat Nixon, HS.1972.137 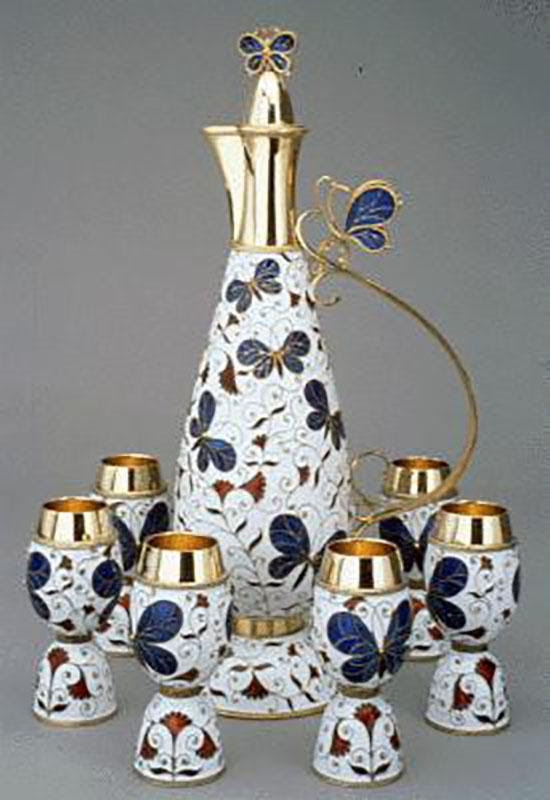 Cloisonné liqueur set. Cloisonné, a difficult technique of soldering and enamel painting–and a specialty of Russian craftsmen–is a favorite gift of Russian leaders. In May 1972, the two leaders of the world's most powerful countries met to sign the Strategic Arms Limitation Talks (SALT) agreement. By restricting missile production in the United States and the Soviet Union, Nixon and Brezhnev hoped to reduce the threat of war between the two nations. Gift of Leonid Brezhnev to President Richard Nixon, HS.1974.59.1-.8 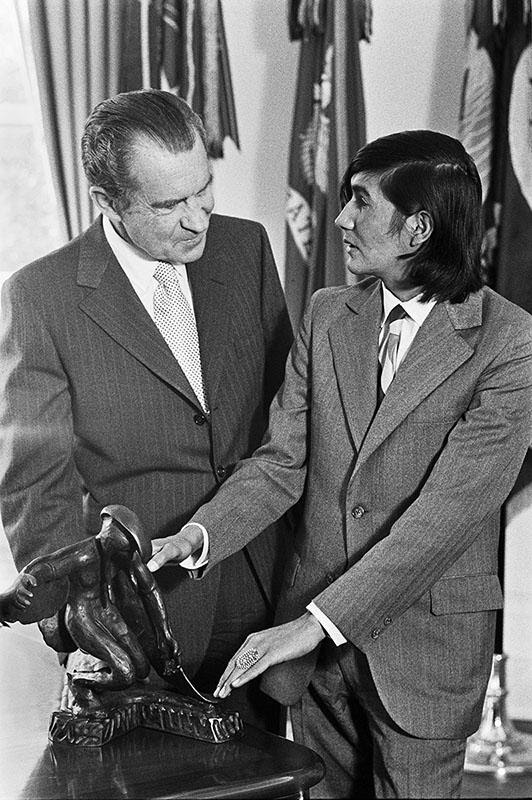 Blind Vietnam veteran Michael Naranjo presented a bronze sculpture titled Dance of the Eagle to President Nixon. They both reportedly knelt on the floor of the Oval Office so Mr. Naranjo could “see” the Presidential Seal on the carpet with his hands. 9/24/1971. (WHPO-7353-04A) 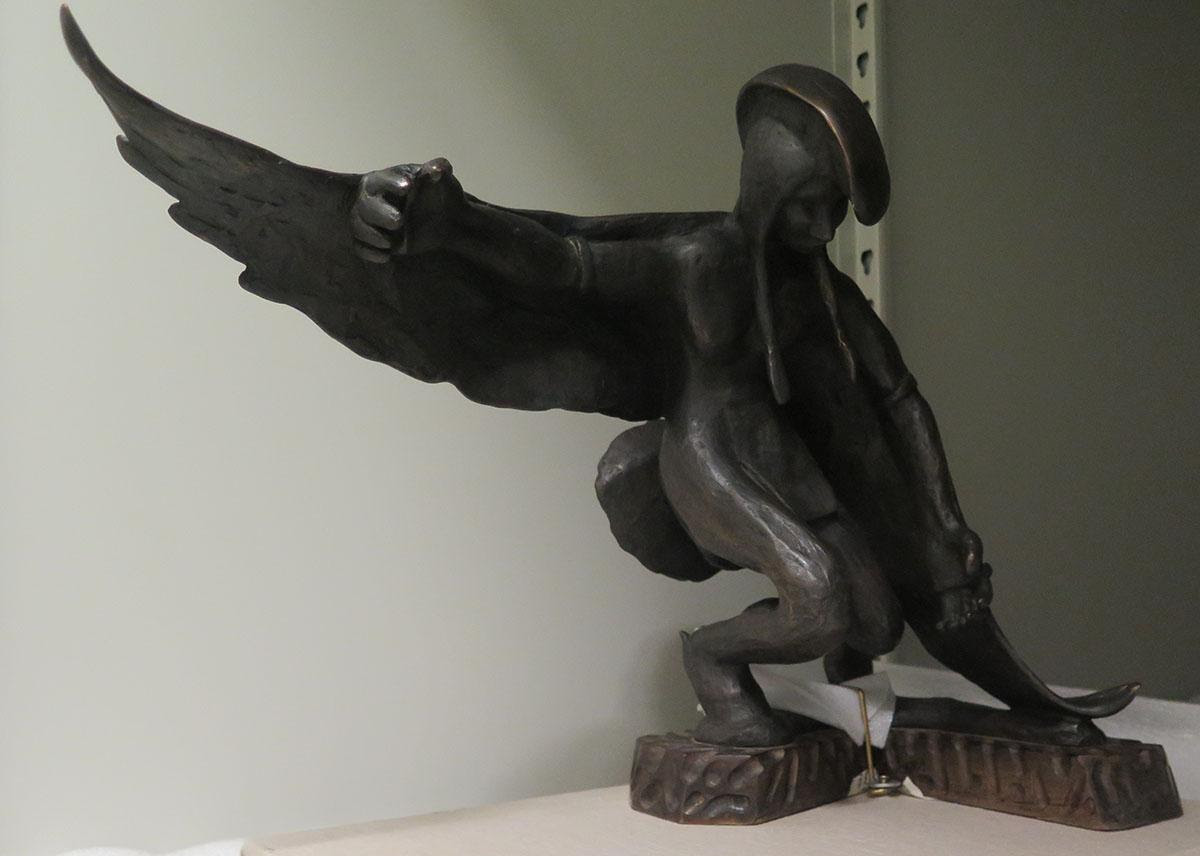 Dance of the Eagle. Gift of Michael Naranjo to President Richard Nixon, D.1971.2020

Gift giving is not limited to ambassadors and foreign dignitaries. The museum and archives are chock full of interesting and personal gifts given from private citizens across the United States and abroad. Artifacts include works of art, furniture, Christmas decorations, and jewelry given by both established artists and novice school children. These gifts are often representative of an era and the pertinent issues of the administration. The President is generally free to accept unsolicited gifts from private citizens, family, and friends but is required by law to disclose gifts of a certain financial amount on annual financial disclosure reports. 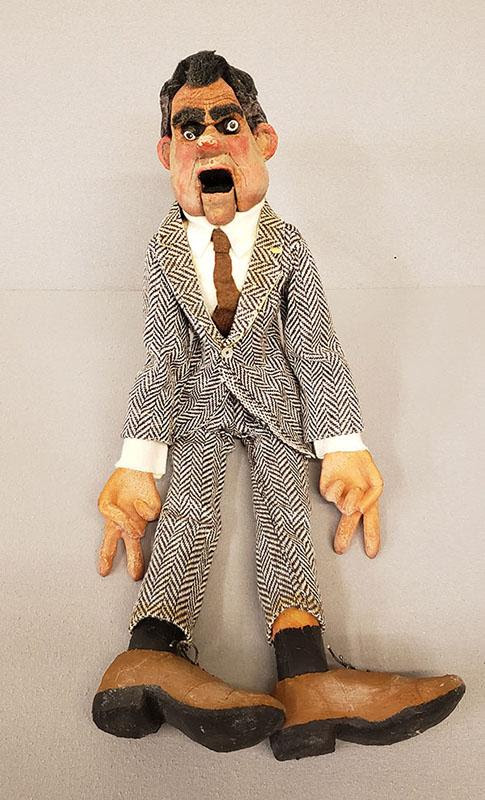 A hand carved rocking chair made by the donor, from local Kentucky wood using pegs instead of glue. Gift of Chester Cornett to President Richard Nixon, D.1973.2739 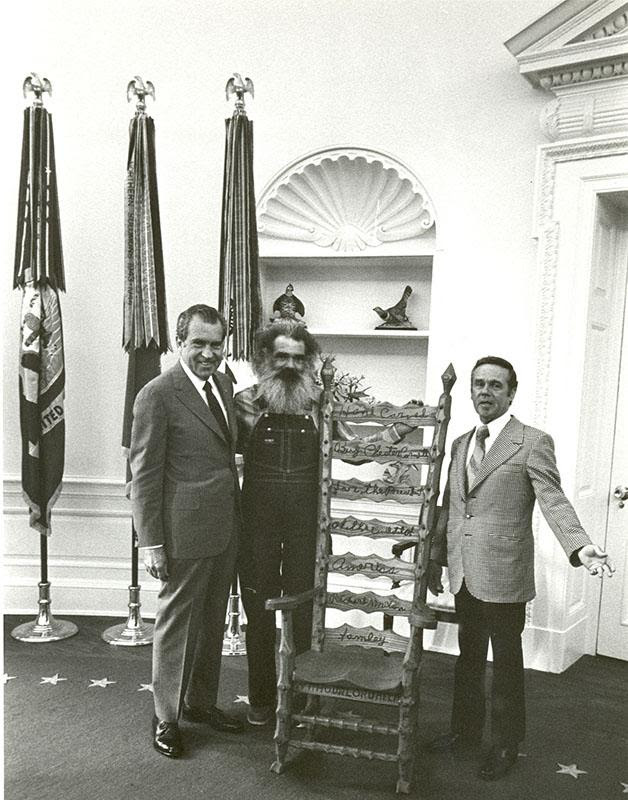 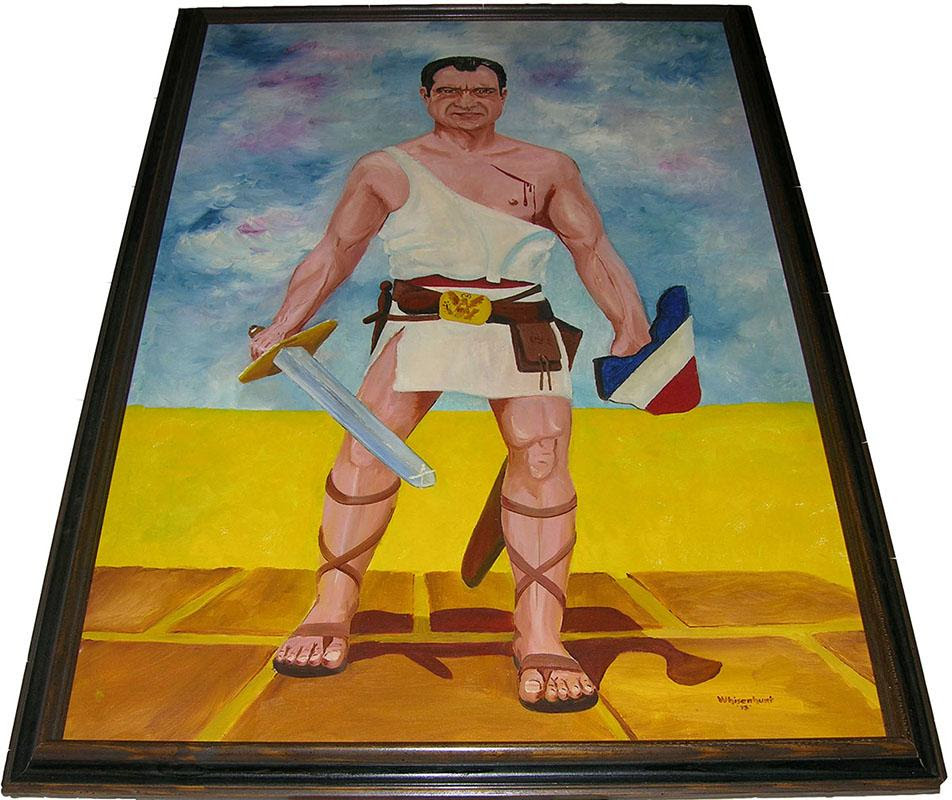 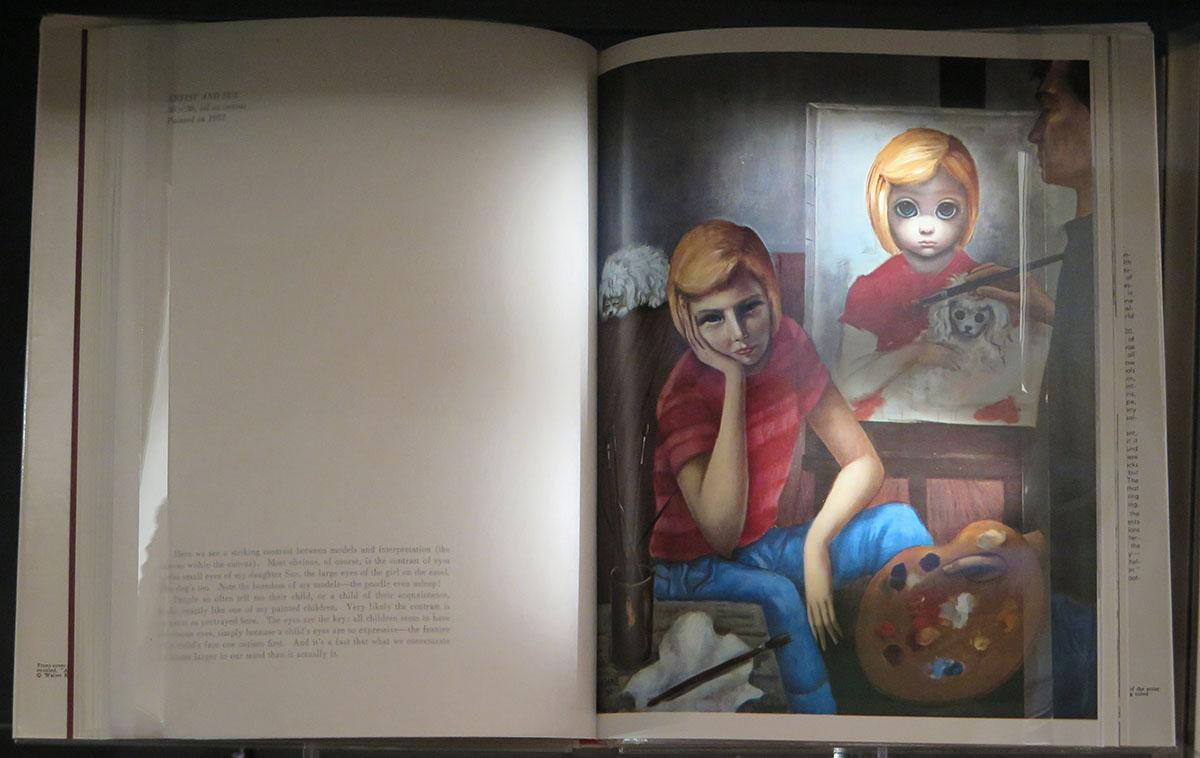 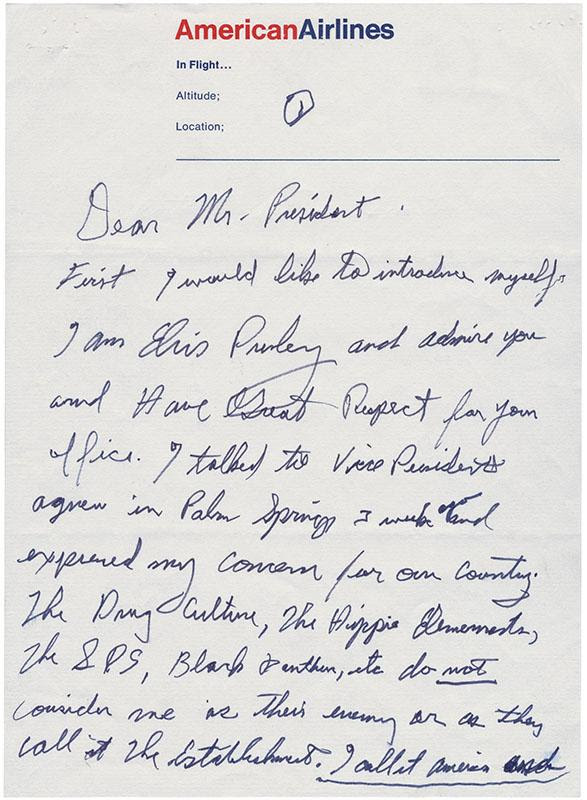 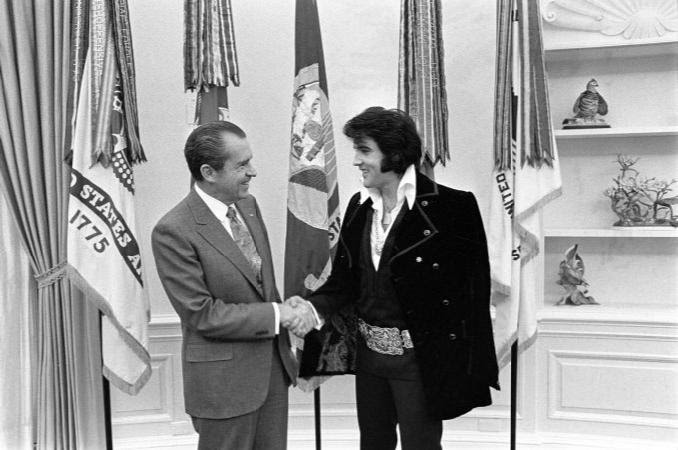 On December 21, 1970, musician Elvis Presley met President Richard Nixon at the White House after requesting an audience with the President through a hand-delivered note. It was his intention to give a “World War II era pistol and obtain for himself the credentials of a federal agent in the war on drugs.” (WHPO-5364-14) 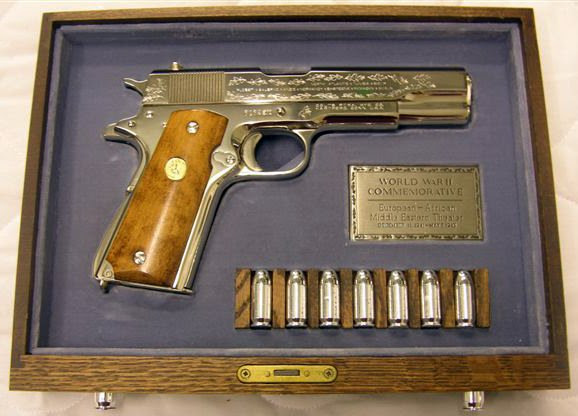 Learn more about the life and legacy of our 37th president in person at The Richard Nixon Presidential Library and Museum in Yorba Linda, California.