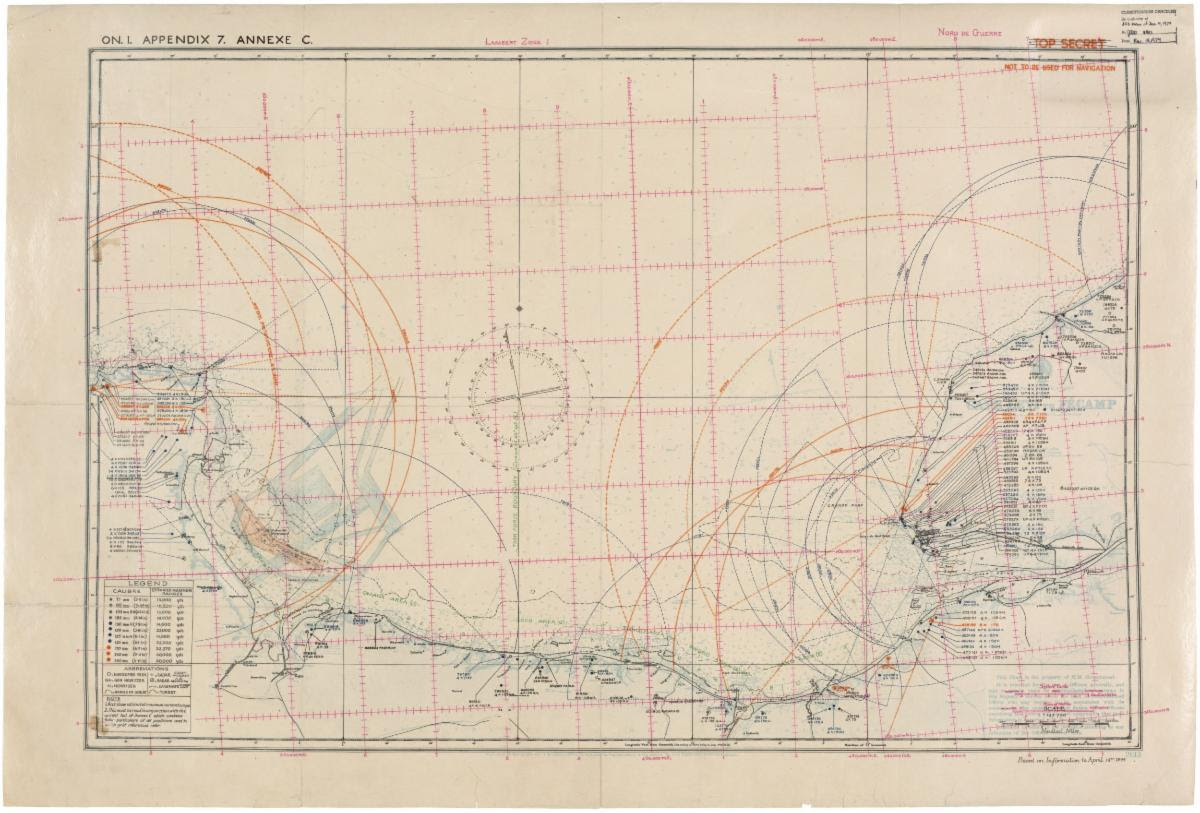 Nearly two months before the invasion of France, this hydrographic chart of the Normandy coast indicates the beach sectors chosen for the pending amphibious assault. NAID 595474

By spring 1944, the world had been at war for nearly five years. In Europe, Nazi Germany and their Axis allies had overtaken much of Western Europe and were engaged in a bitter struggle with the Soviet Union. The Allies planned to open a second front against the Nazi regime in the west. 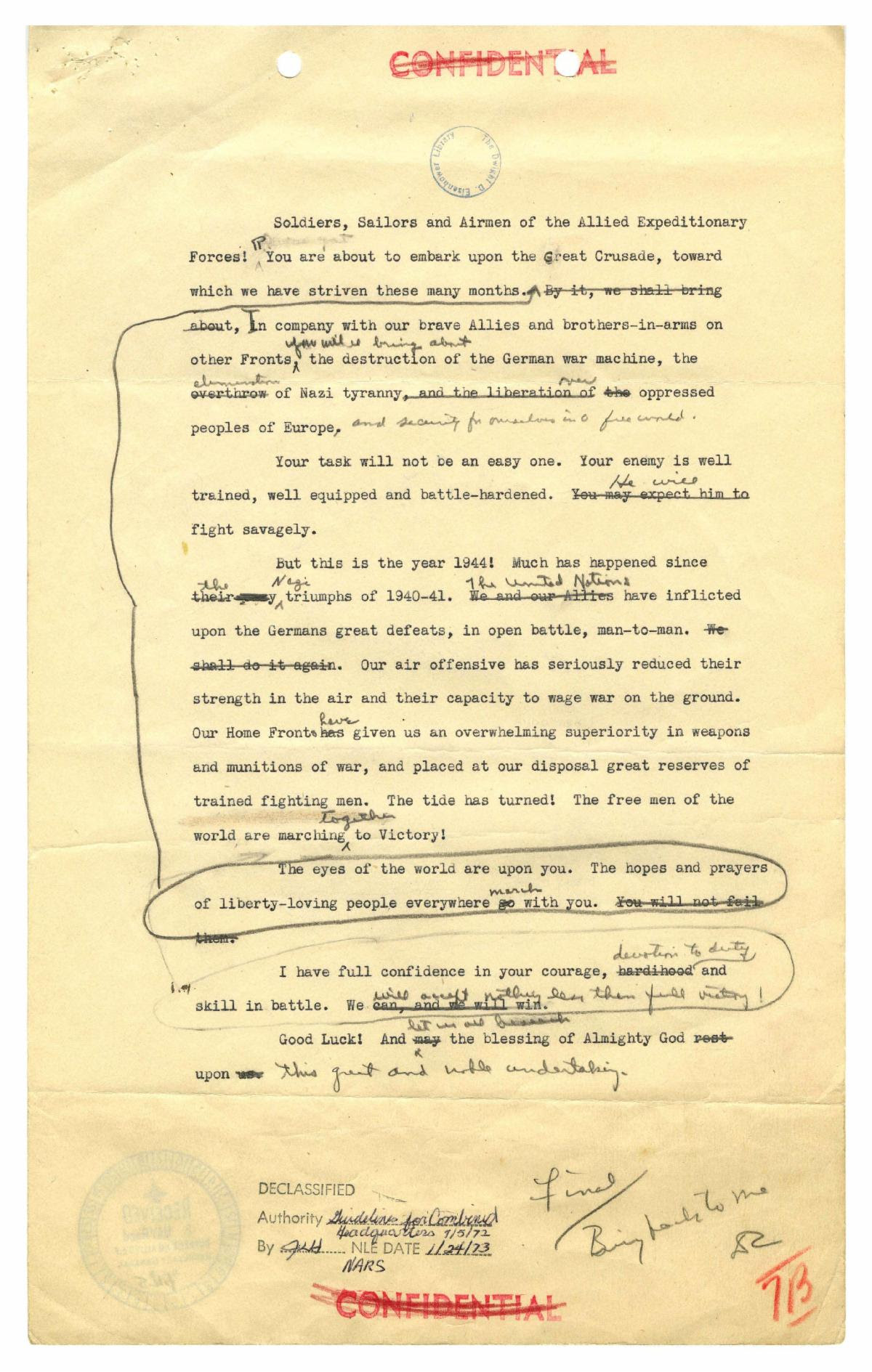 General Dwight D. Eisenhower annotated this draft of the Order of the Day for the Allied invasion of Normandy during World War II. Thousands of copies of the final version were printed and distributed to Allied soldiers before the invasion, which took place on June 6, 1944. NAID 12010107

Code-named “Operation Overlord,” the Allies’ plan called for an invasion of France’s Normandy coast through a combination of airborne operations and an all-out amphibious assault along a 50-mile stretch of heavily-fortified coastline. D-Day came in the early hours of June 6, 1944. Supported by more than 5,000 ships and 13,000 aircraft, and over 160,000 Allied troops began their assault on the beaches in their first steps to liberate France and, ultimately, the rest of continental Europe. 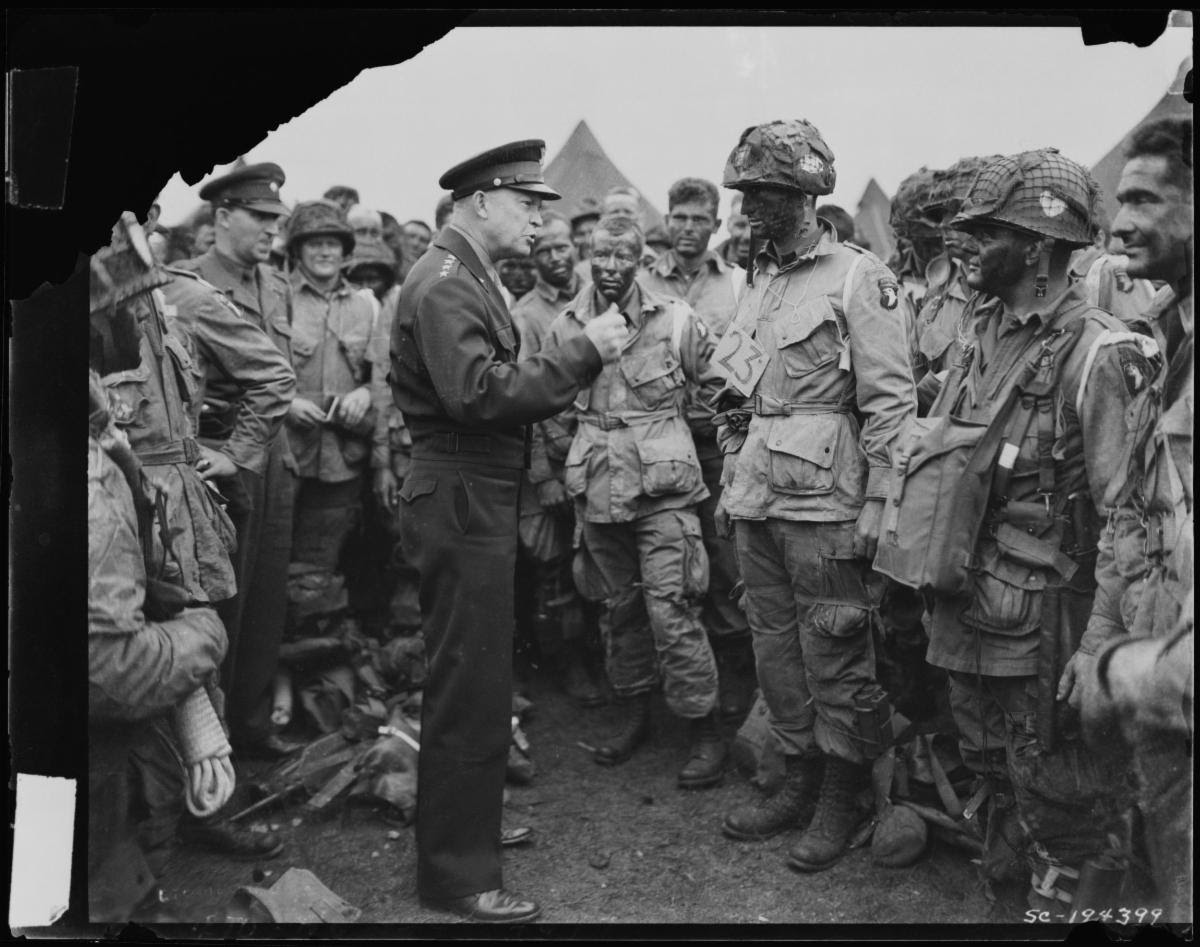 This photograph shows General Dwight D. Eisenhower giving the order of the day – "Full victory-nothing else" – to paratroopers of the 101st Airborne Division in England. Eisenhower visited them on the eve of the Normandy invasion, moments before they boarded airplanes to participate in the first assault of occupied France on D-Day. NAID 531217

“Yesterday, I visited British troops about to embark and last night saw a great portion of a United States airborne division just prior to its takeoff. The enthusiasm, toughness, and obvious fitness of every single man were high and the light of battle was in their eyes.” - General Eisenhower, June 6, 1944 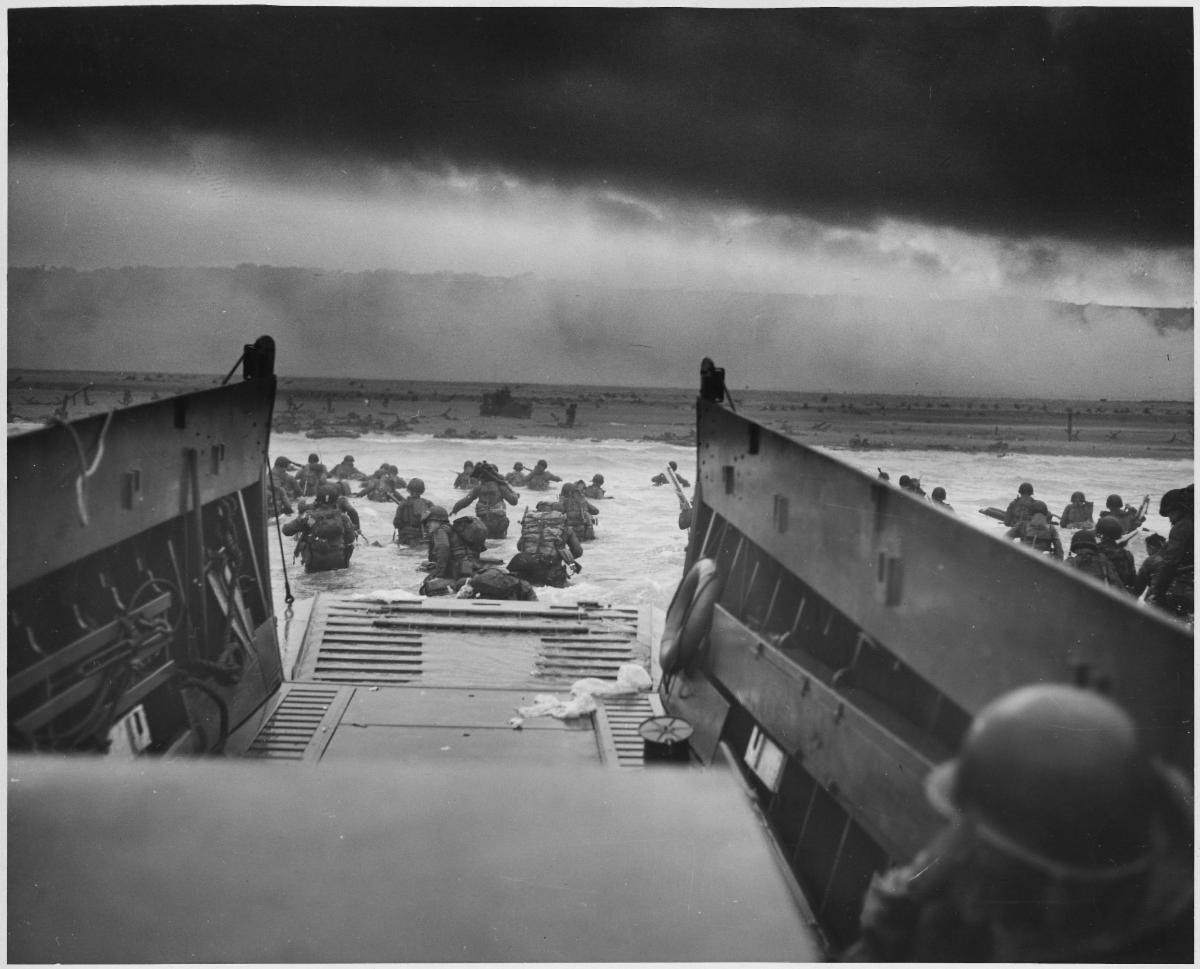 "Into the Jaws of Death - U.S. Troops wading through water and Nazi gunfire"; 6/6/1944. Troops disembark from a landing craft on the Normandy coast. Coast Guardsmen manned the landing craft, which debarked troops near shore and immediately returned to the assault transports to pick up more. This dangerous shuttle continued throughout the day under enemy fire. NAID 195515 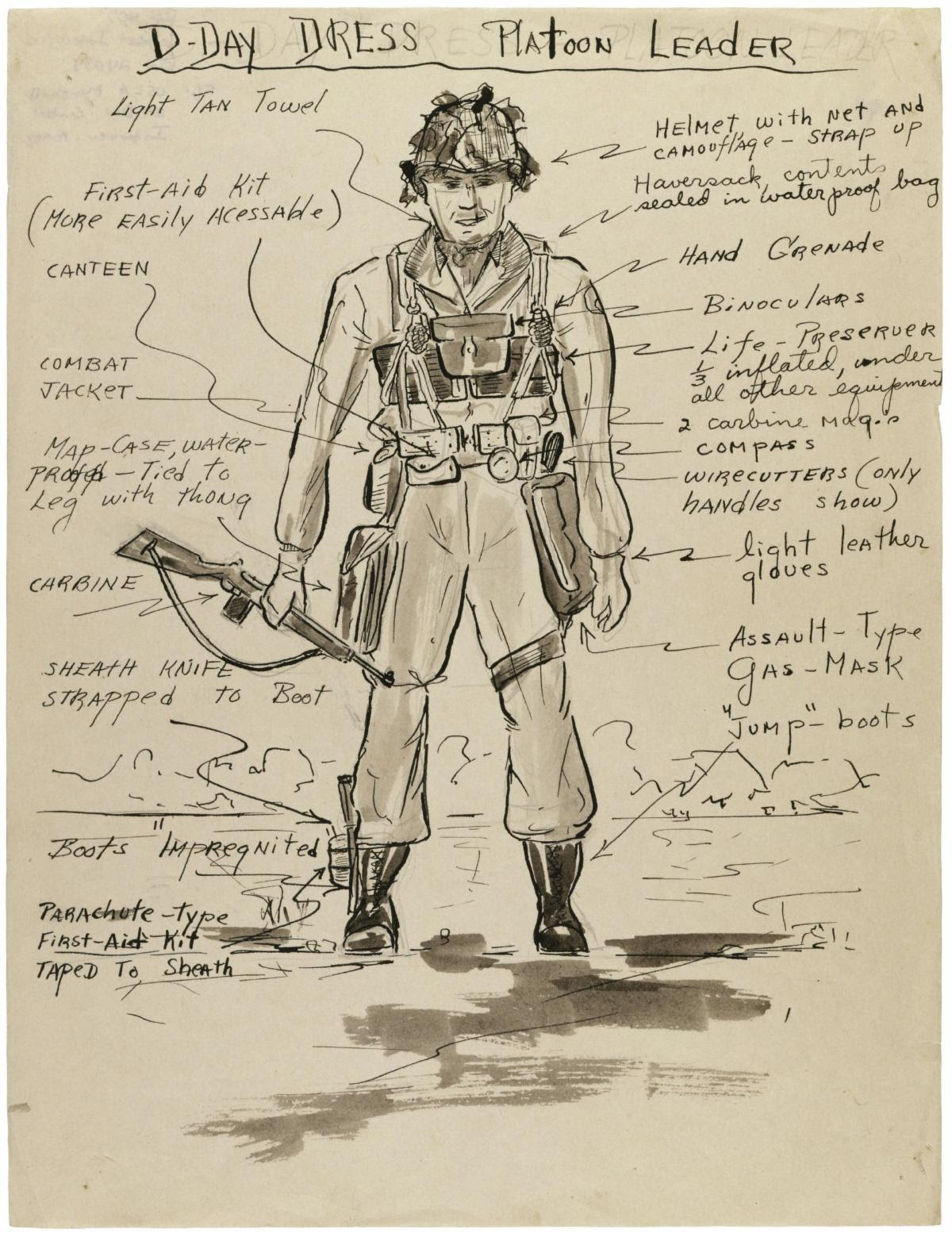 The D-Day assault was rigorous and required soldiers to prepare for an attack that started at sea and ended on land. This drawing by combat historian Lt. Jack Shea of the 29th Infantry Division illustrates how well soldiers were equipped for an amphibious attack. Several features were designed to help soldiers survive in water. NAID 18552849

Using DocsTeach, the National Archives’ online tool for teaching activities through primary resources, we invite you to explore various photographs and documents related to D-Day. Additionally, help students understand the mindset of Allied leaders on the eve of the invasion through the teaching activity “The Night Before D-Day,” whereby students compare and contrast documents through document analysis.