﻿Ratified in July 1971, the 26th Amendment to the United States Constitution lowered the voting age of U.S. citizens from 21 to 18 years old.

"...the right of citizens of the United States, who are eighteen years of age or older, to vote shall not be denied or abridged by the United States or by any State on account of age." Section I, Amendment 26 of the U.S. Constitution" 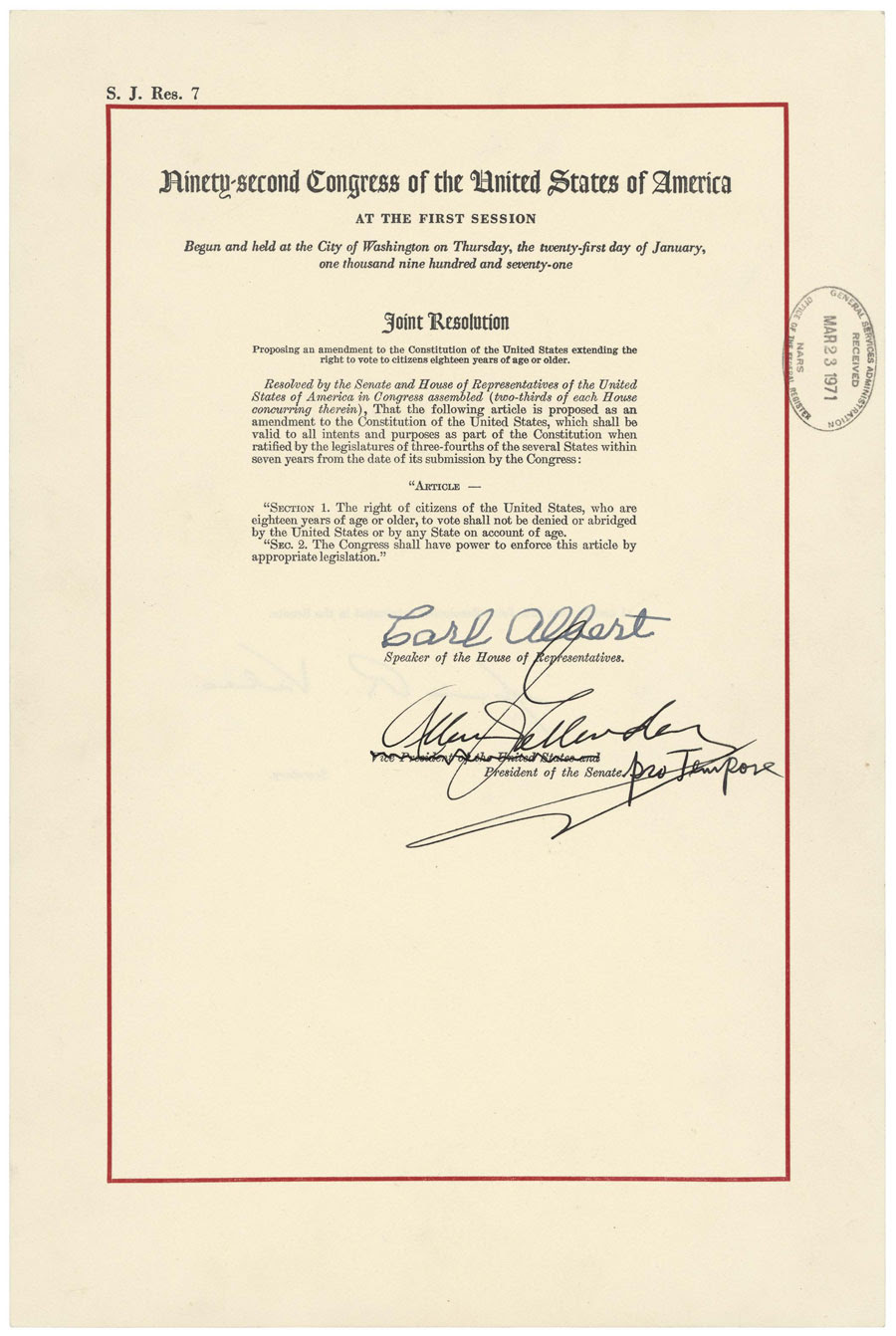 Sentiment to lower the nation’s voting age dates back to WWII. As American involvement in the war increased, President Roosevelt sought to increase the size of the nation’s military and lowered the draft age of young men from 21 to 18 years old. Many were dismayed at the notion that if young men could fight and die for their country, they could not participate in its fundamental democratic process - voting. “Old enough to fight, old enough to vote” became a widespread slogan, eventually prompting a proposal for a constitutional amendment to give 18-year-olds the right to vote. The proposal, however, failed to gain political traction. 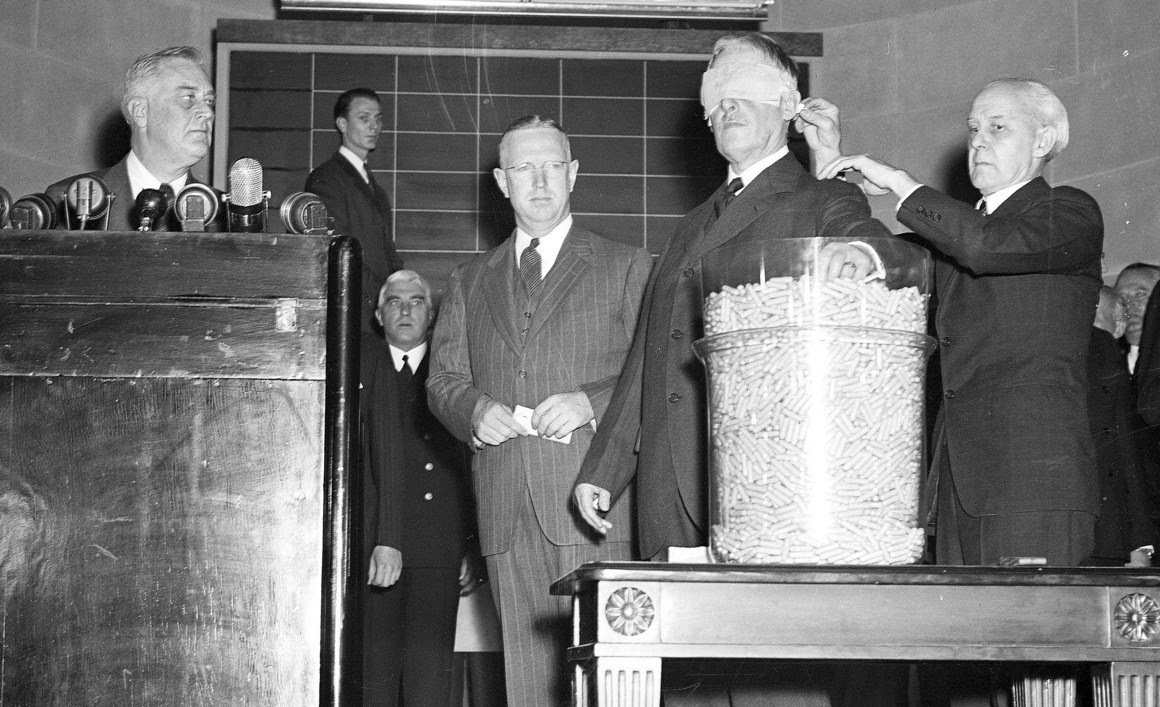 Secretary of War Henry Stimson is blindfolded as he draws the first number for the nation's first peacetime military draft lottery in Washington on Oct. 29, 1940. Behind the lectern at left is President Franklin D. Roosevelt, who was to announce the first number drawn. | AP Photo

"The eastern world it is explodin'

You're old enough to kill but not for votin'" 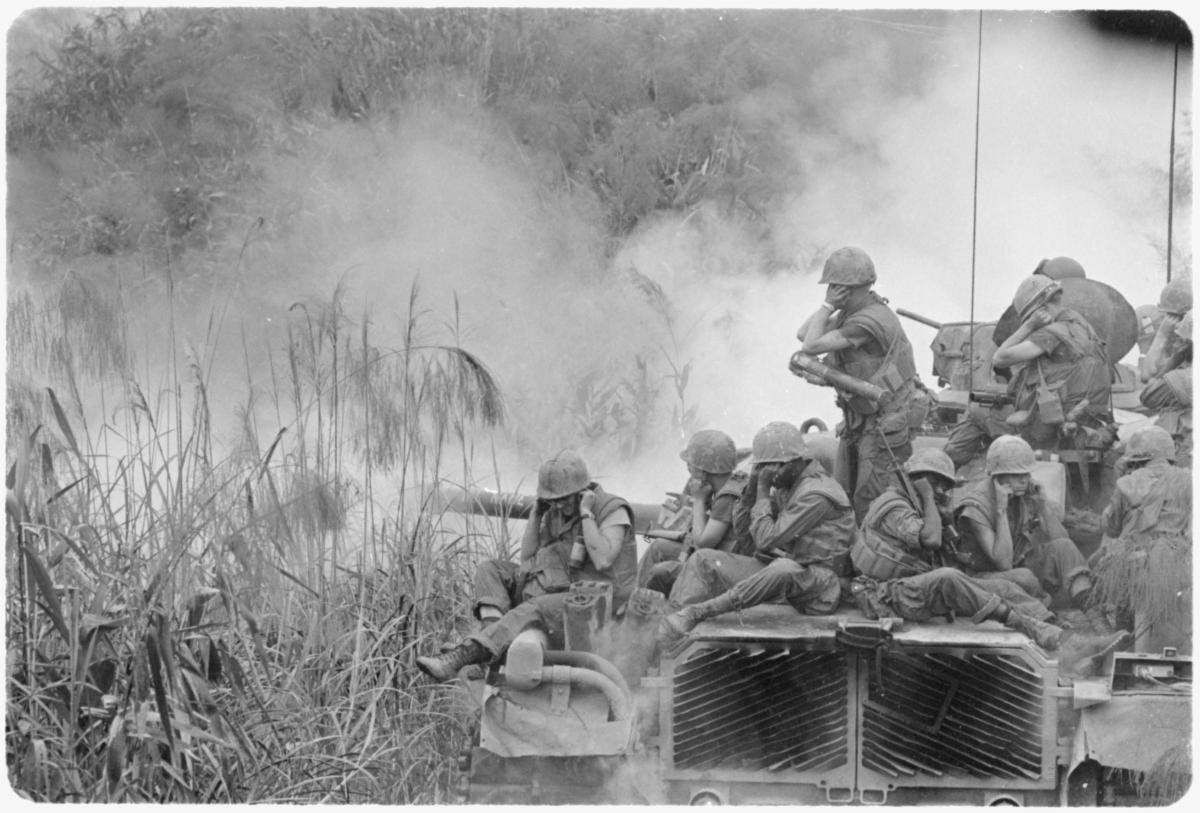 By 1965, the United States became more heavily and directly involved with the war in Vietnam. Overall public support for the conflict began to wane considerably as American casualties rose. The conduct of the war increasingly came into question. By the end of the decade, anti-war protests were widespread as thousands of 18-year-old Americans were again being conscripted into military service to fight - and die - for their country. “Old enough to fight, old enough to vote,” the slogan first heard during World War II, was again adopted by student activists. 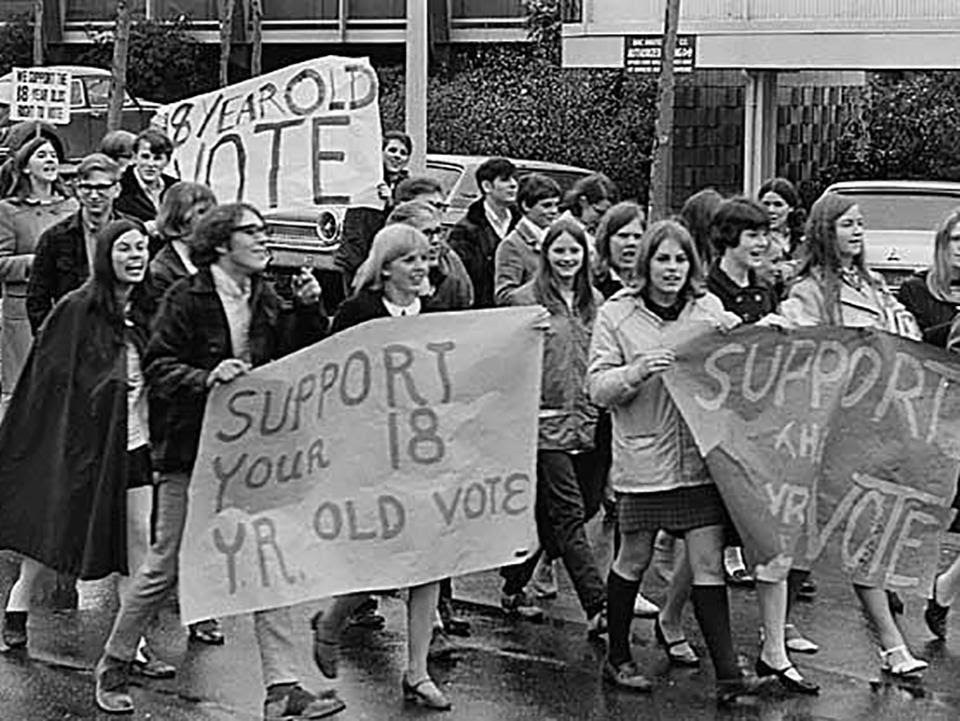 A renewed emphasis on lowering the voting age to 18 again became a hot political topic. In April 1970, as part of legislation to extend the Voting Rights Act of 1965, Congress controversially lowered the voting age to 18. Although personally supportive of the issue, President Nixon felt it was the right of the states and not the federal government to set the voting age. President Nixon nevertheless signed the act, but in December of 1970, the Supreme Court ruled that Congress had overstepped its bounds. Fearing confusion as to who would be able to vote in the 1972 election, Congress quickly proposed and surprisingly passed a constitutional amendment permanently lowering the voting age to 18. Ratification of the amendment by the states was completed within four months - the fastest in ratification history.

On July 5th, 1971, in a ceremony in the White House East Room, in front of the 500-member choral group Young Americans in Concert, President Richard Nixon signed the certified amendment along with three selected 18-year-olds signing as witnesses. 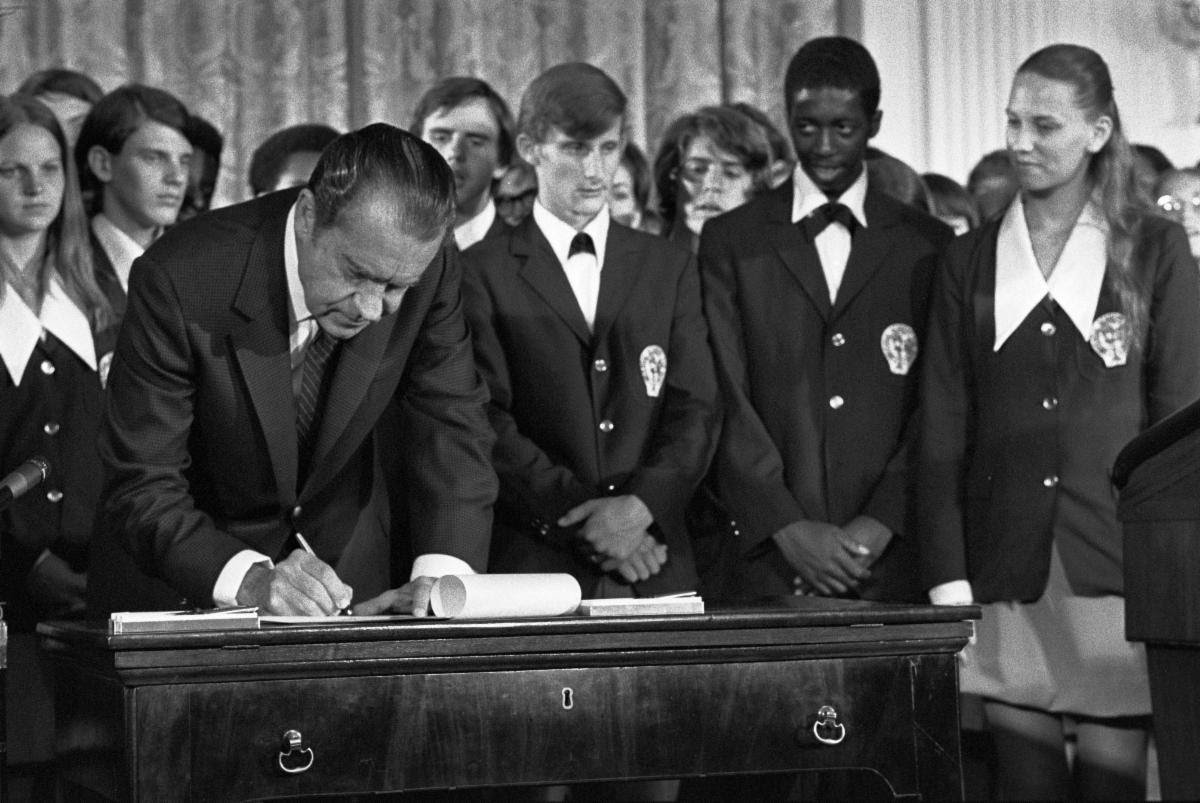 On 7/5/1971, in a ceremony held in the East Room, the amendment was certified (signed) by the General Services Administrator, Robert L. Kunzig, followed by President Nixon and 18-year-old students from "Young Americans in Concert" (Julianne Jones, Joseph W. Loyd, Jr., and Paul S. Larimer) signing as witnesses. WHPO-6749-09A