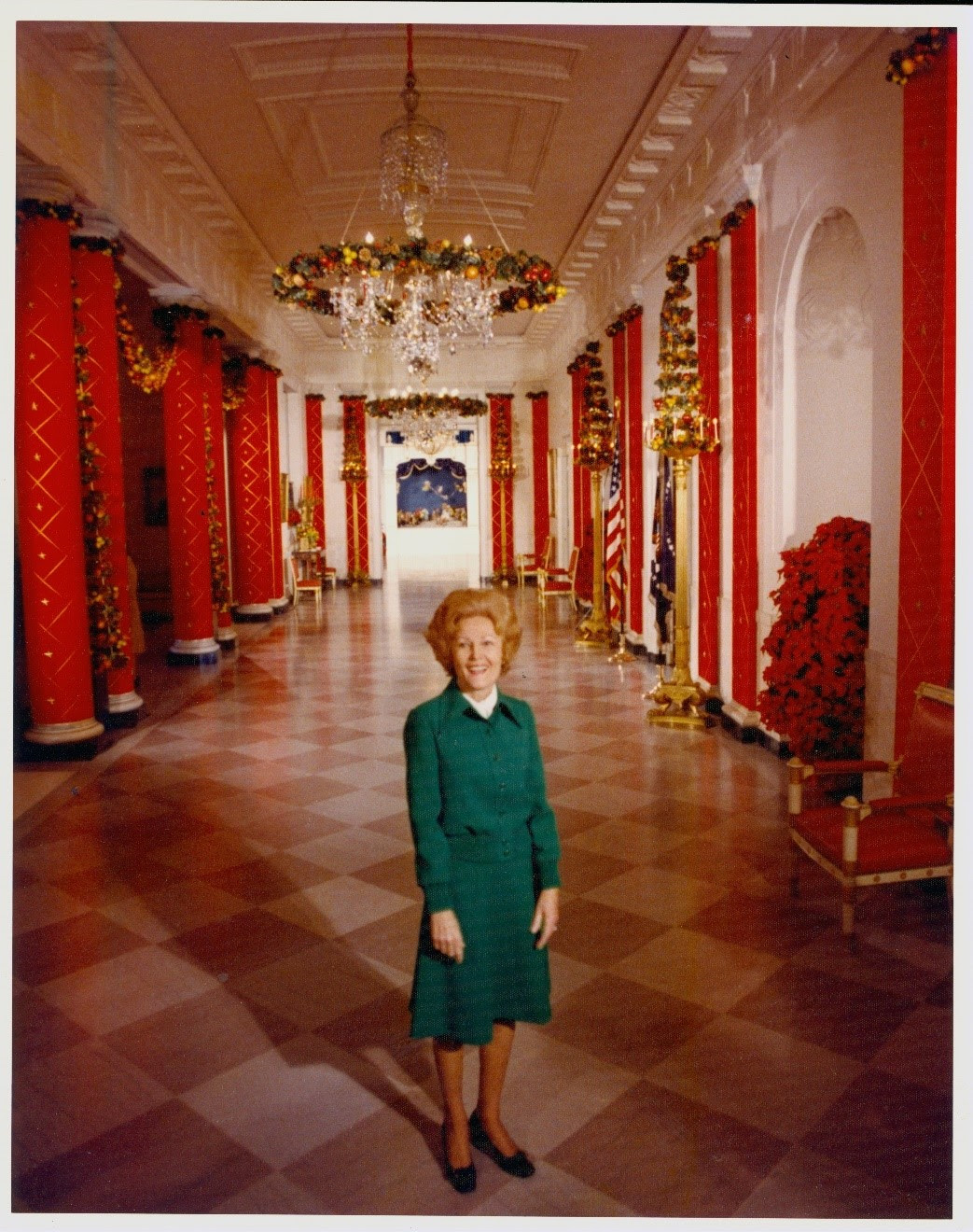 During her five holiday seasons spent in the White House, First Lady Pat Nixon utilized national celebrations to create new traditions, resurrect old ones, and expand access to “the People's House.” Wreaths, poinsettia trees, Christmas carolers, snowmen, and gingerbread houses greeted holiday revelers both foreign and domestic and could be enjoyed both day and night. 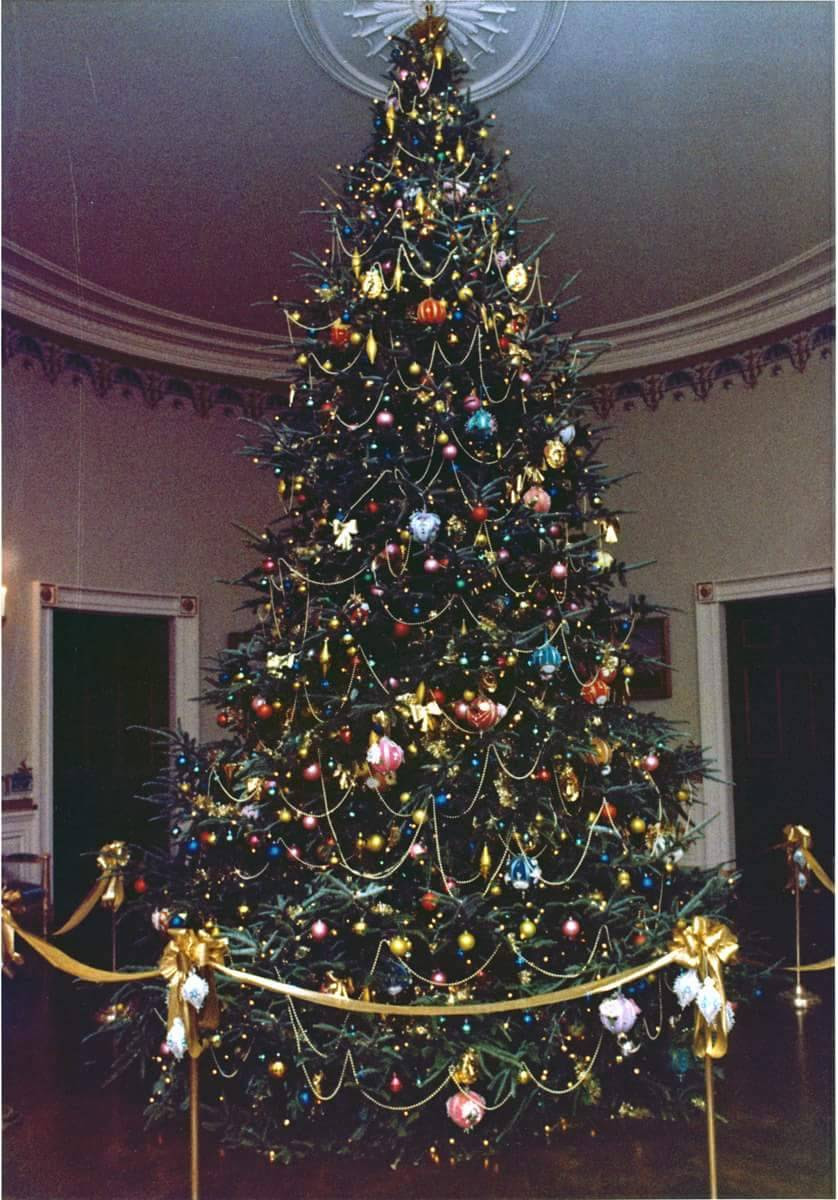 The 1973 White House Christmas tree had a gold theme. In addition to ornaments from previous years, the Blue Room tree featured strung gold beads and gold ball ornaments that were reminiscent of some of the gold gilded antiques from the presidency of James Monroe. (WHPO-E1984-7) 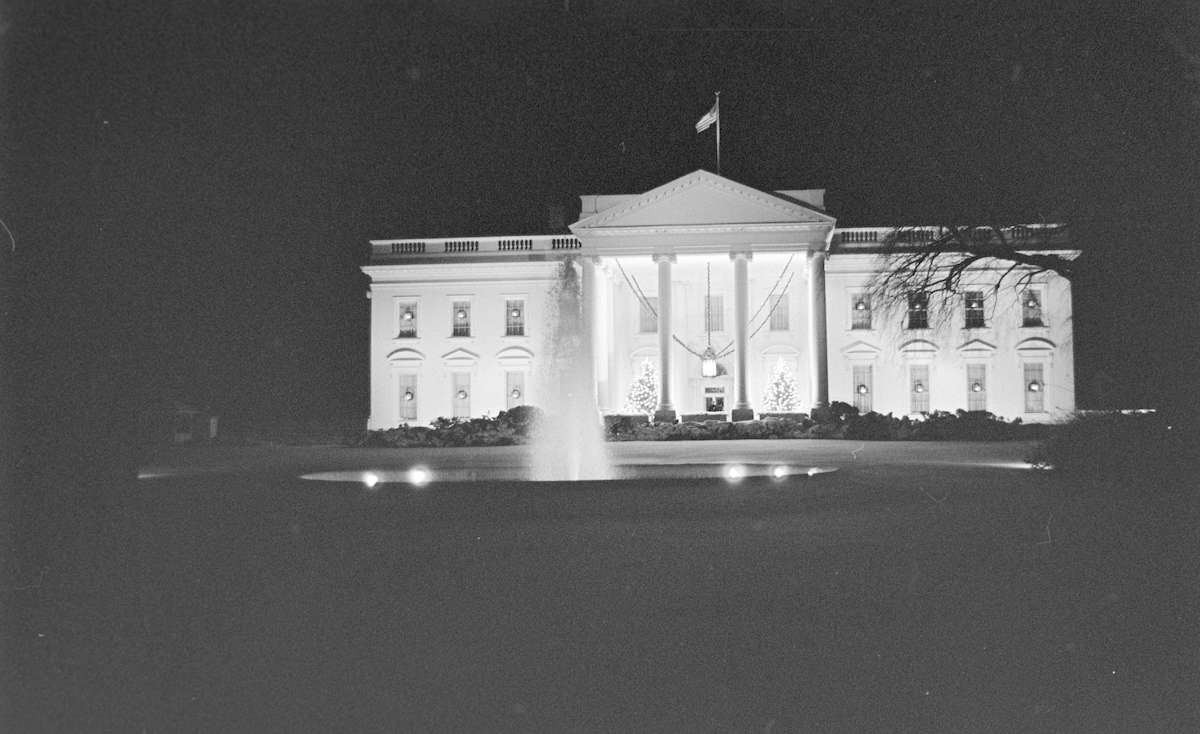 Hanging wreaths in each of the windows facing Pennsylvania Avenue. (WHPO-5419-17)

Mrs. Nixon resurrected the tradition of hanging wreaths in each of the windows facing Pennsylvania Avenue. The wreaths were visible both day and night due in part to her “successful project to light the exterior of the White House every evening for the first time in its history.” In 1973, she drew theme inspiration from the nation’s past bedecking her Christmas tree in gold to honor James Monroe “who bought gilded tableware for the White House in 1817.” Hallmark Christmas cards sent to political supporters and White House staff that same year featured artist August Kollner’s 19th century view of the “President’s House.” Fun Fact: First Ladies Kennedy and Nixon were instrumental in returning many of the Monroe-era antiques to the White House. 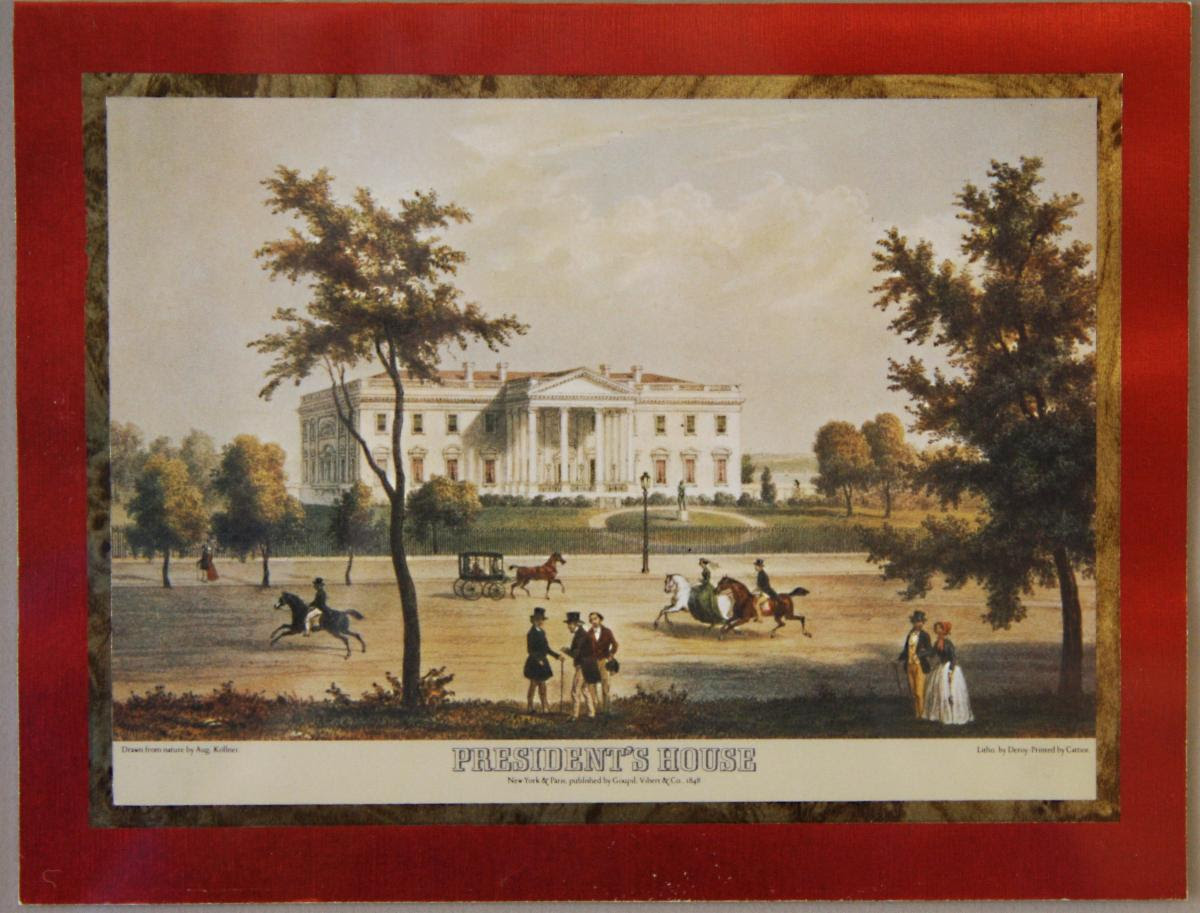 This charming 19th century view of the “President's House” as seen from Lafayette Square was drawn by August Kollner in 1848 and later published in France in a series of views of America. Richard Nixon Presidential Library and Museum, National Archives and Records Administration, PM.43.5 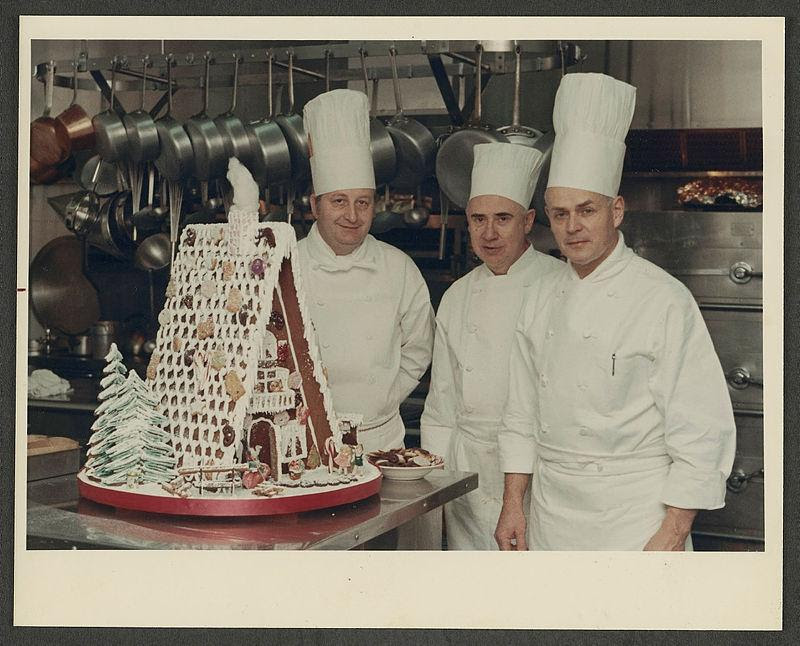 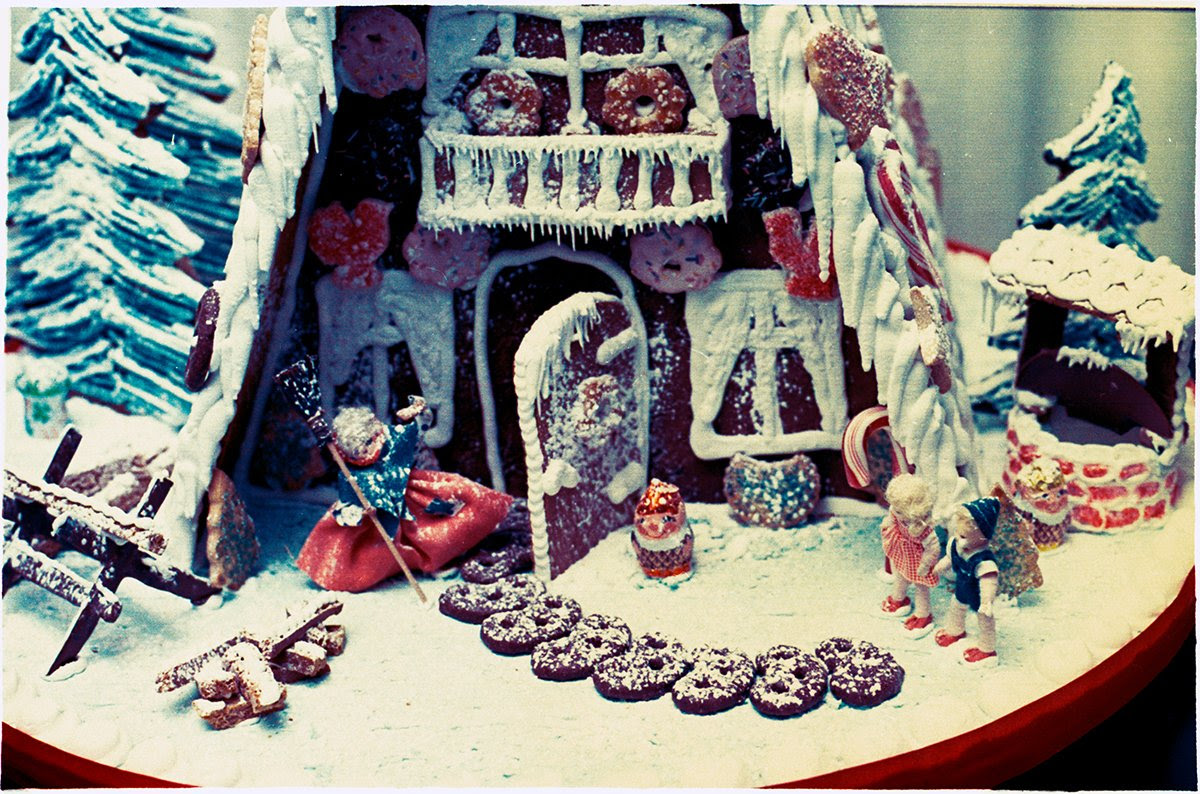 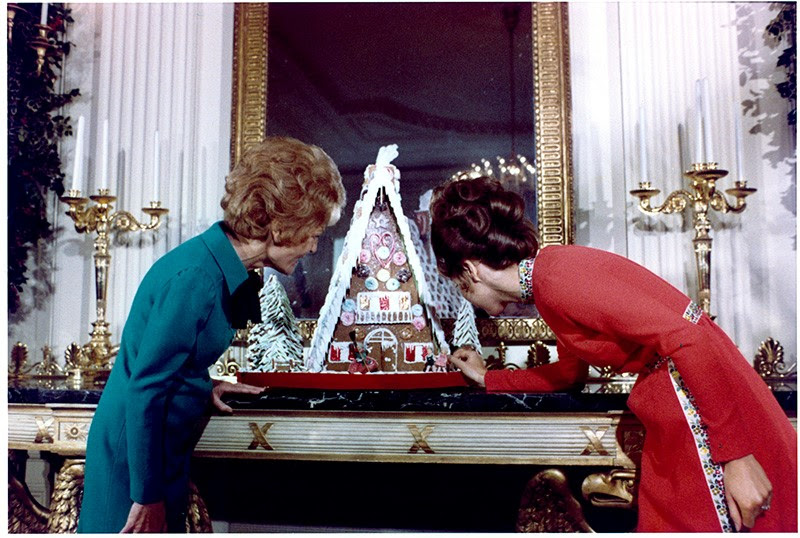 In 1969, Pat tasked Assistant Executive Chef Hans Raffert to create a gingerbread house to display prominently in the State Dining Room. The traditional German A-frame style gingerbread house weighed in at 40 pounds, including six pounds of icing to hold the two-foot confection together. It began a tradition now considered among the most treasured and recognizable of the White House holiday season. 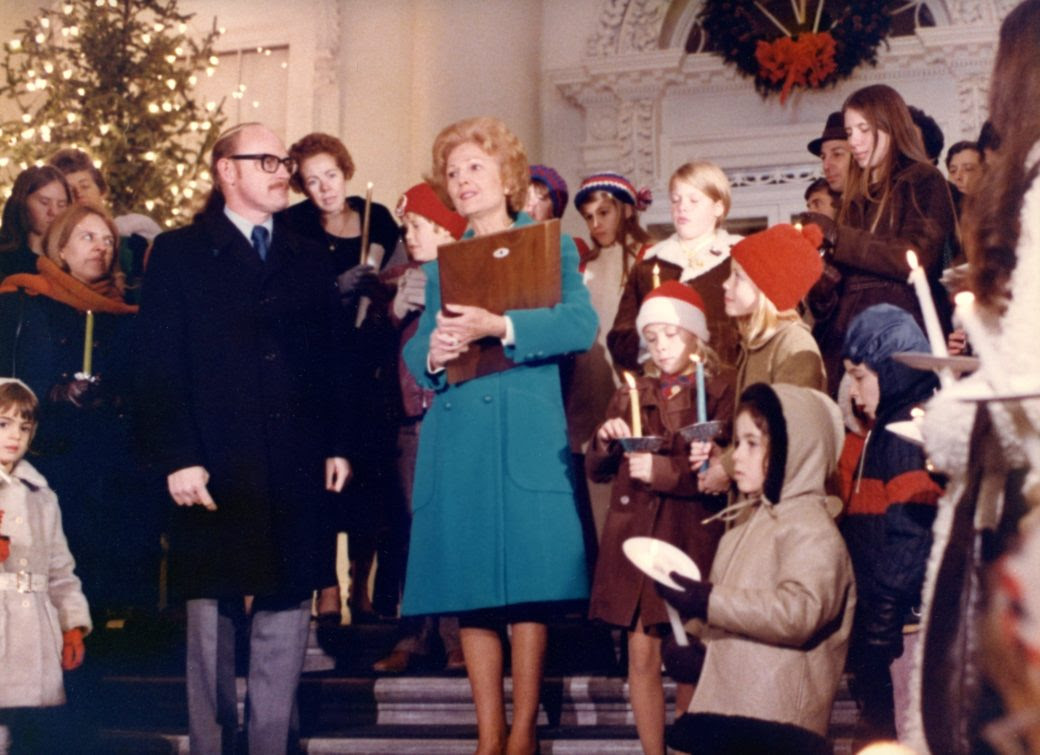 Mrs. Nixon greets visitors on the steps of the North Portico during the 1972 Candlelight Tours. (WHPO-D10850-10)

Pat Nixon’s most popular and enduring tradition was the creation of the Candlelight Tours. The opening of the White House during evening hours, from 6:30 to 9:00 p.m., permitted holiday revelers from all walks of life to enjoy the festive decorations. These tours, accented by candlelight and Christmas music played by the Marine Band, drew thousands of visitors. 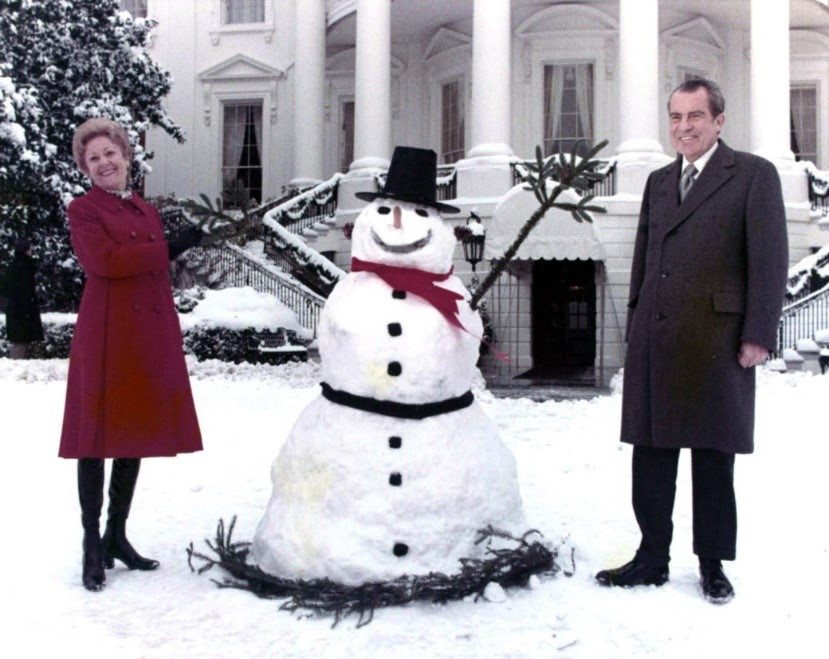 December 1973, President Richard Nixon and First Lady Pat Nixon pose for a photograph with a snowman on the White House South Lawn. (WHPO-E1999-12A) 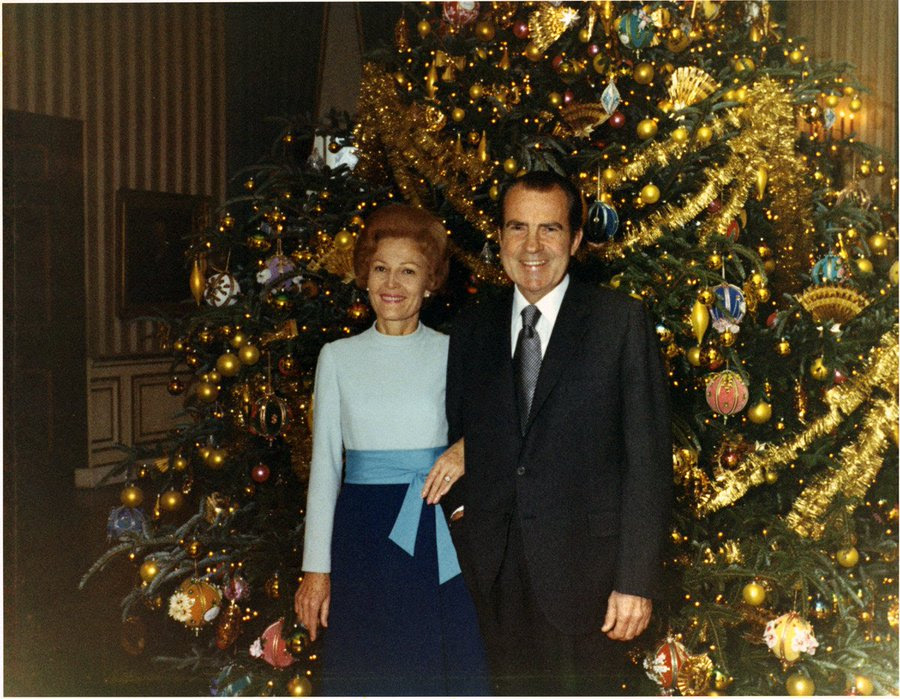 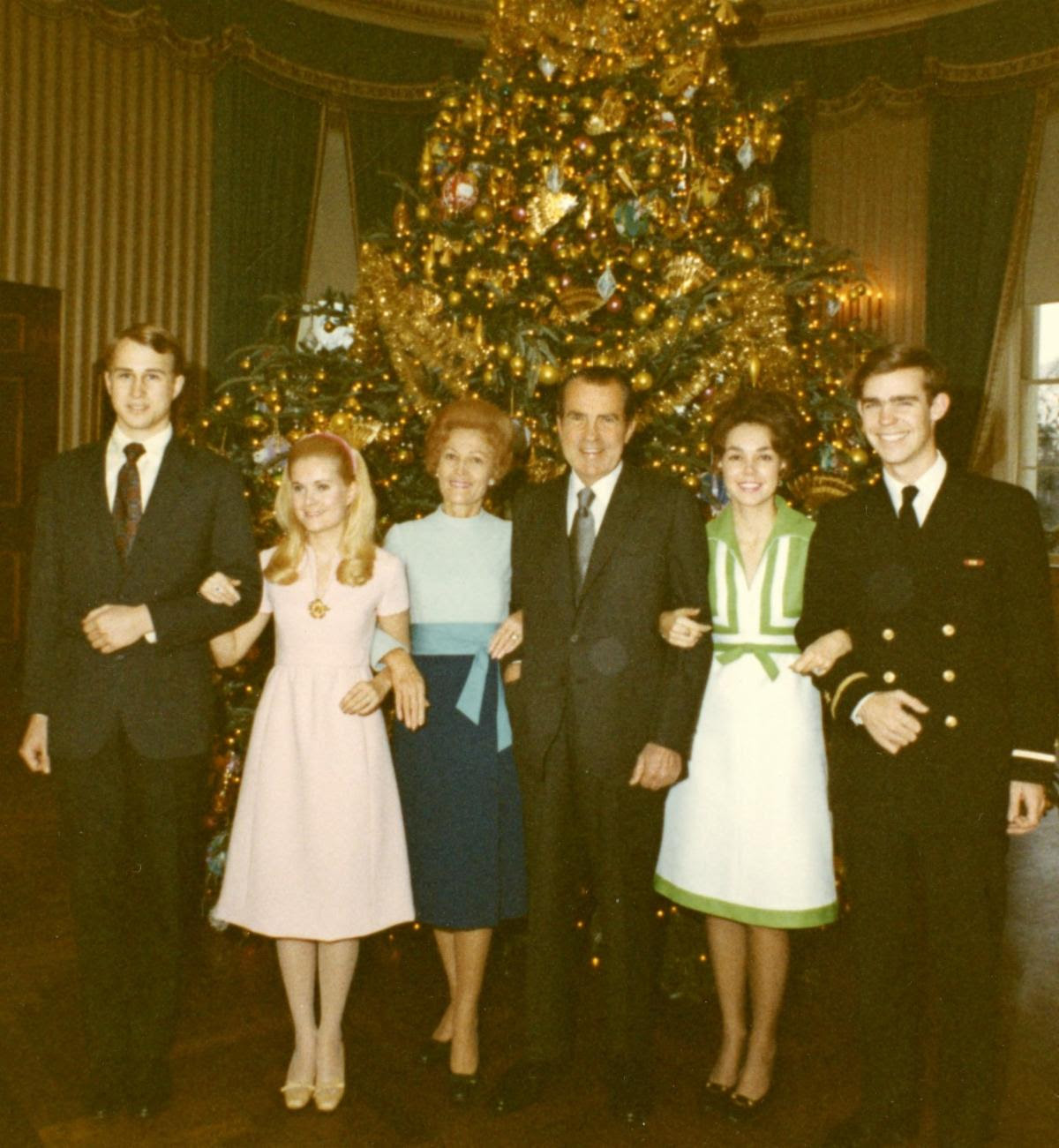 Pat Nixon’s love of family, America, and its citizens are displayed through traditions she started during her time in the White House. Many of these traditions continue today.

“To my mother, Christmas meant giving more than receiving. In the White House, there’s a special setting to give back to the whole nation at Christmas time. Her innovations – the candlelight tours, the gingerbread house – evoked a simpler time in our country’s history.”- Tricia Nixon Cox

Step back into Christmas Past with artifacts from our museum vault. 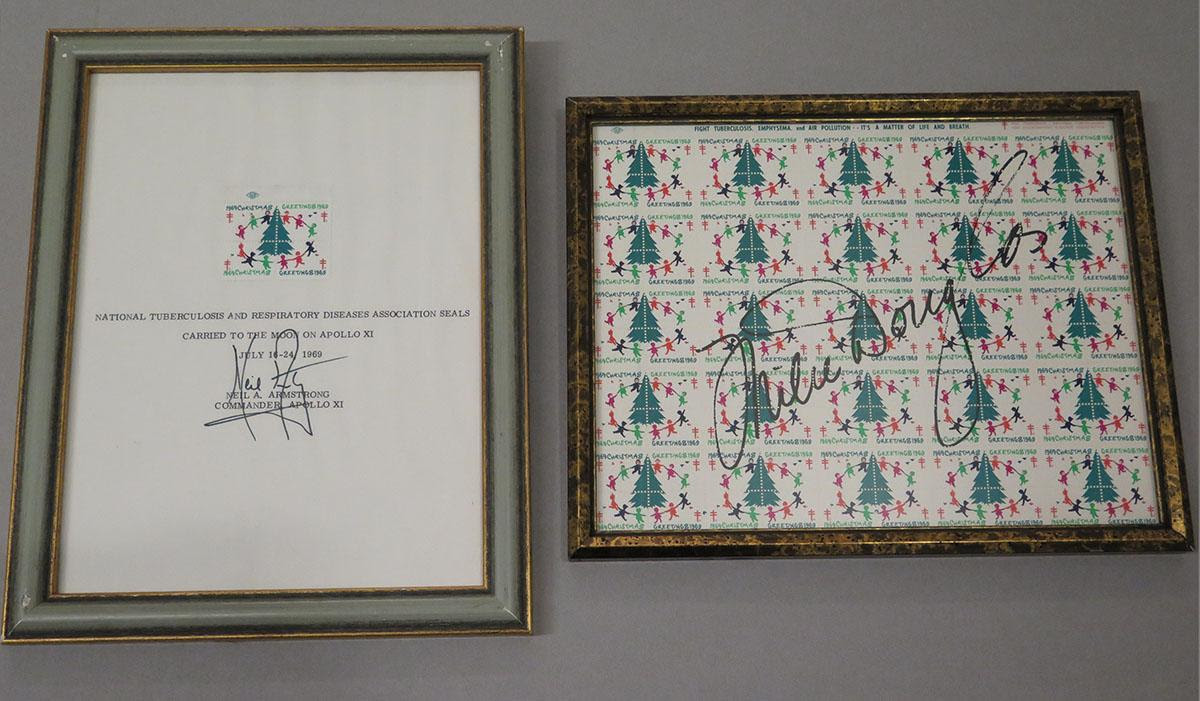 A sheet of framed 1969 Christmas seals and one of the seals carried to the moon on Apollo XI, autographed by astronaut Neil Armstrong. Gift of Marisa Sandifer to Tricia Nixon, D.1969.2300.a-b

Seven stockings were made and personalized for the Nixon family including one for Mrs. Mamie Eisenhower who spent the holidays in 1971 with the Nixons and her grandson David. Gift of Mrs. Joseph King to President Richard Nixon, First Lady Pat Nixon and Family, D.1971.3494.1-.8 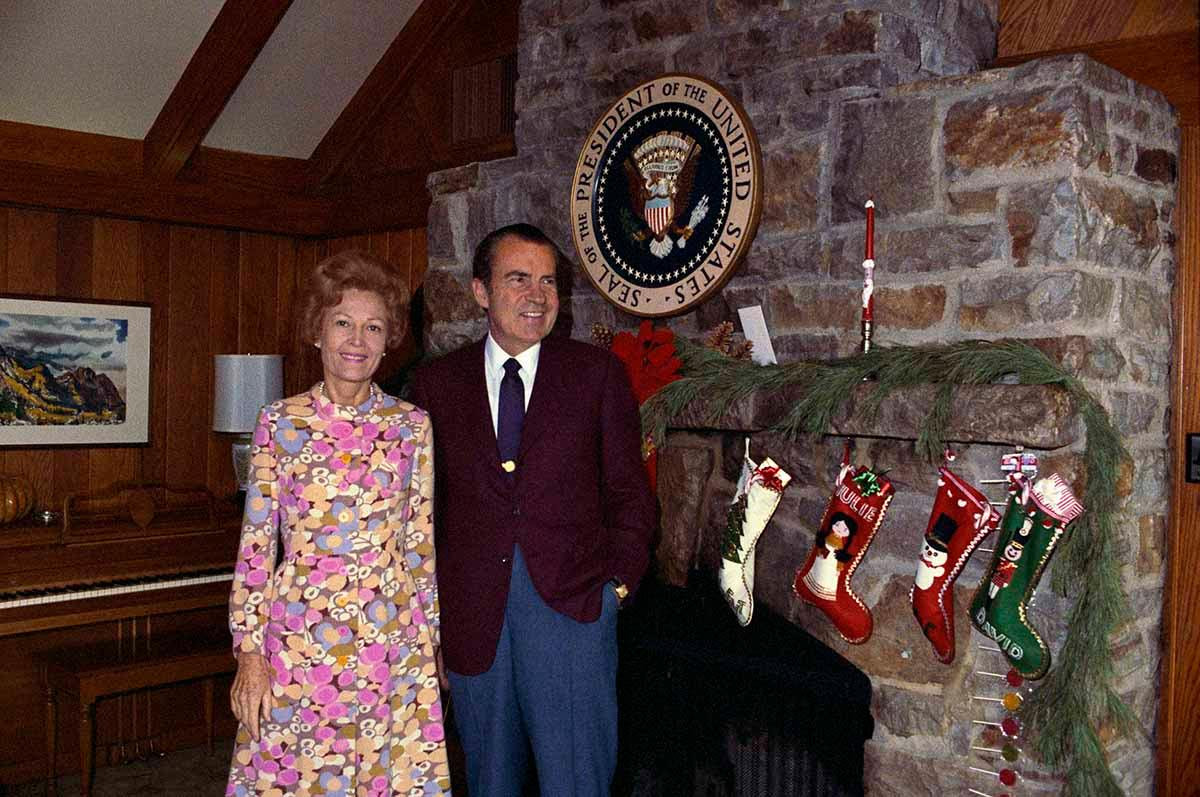 Photograph of First Lady Pat Nixon and President Richard Nixon with the gifted stockings at Camp David in 1971. (WHPO-8120-11A)

A snowman made from a bowling pin by a class of 45 students from Ashlawn Elementary School, Arlington, Virginia. Gift of Paul Brown to President Richard Nixon, D.1971.2789

The Richard Nixon Presidential Library and Museum would like to wish you and yours Happy Holidays and best wishes for a happy and healthy new year!﻿