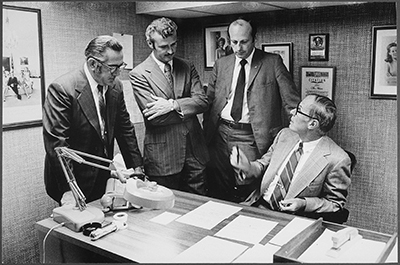 The White House Photographic Office Collection documents the activities of President Nixon, his family, and administration between 1969 and 1974. Some images from the 1968 election campaign are included in this collection.

This series consists of photographic coverage of President Richard Nixon meeting with prominent social, political and cultural personalities; speaking engagements and news conferences of the President and various high-ranking members of the White House Staff and Cabinet; Presidential domestic and foreign travel, including Presidential vacations; social events and entertainment involving the First Family, including entertainers present; official portraits of the President, First Family, and high-ranking members of the Nixon Administration; the 1969 and 1973 Inaugurals; the President's 1972 Presidential election campaign appearances (including speeches) and other official activities of the White House Staff and the President's Cabinet from January 20, 1969 until August 9, 1974 at The White House and the Old Executive Office Building; other locations in Washington, DC, such as The Mall; and the presidential retreats in Camp David, Maryland, Key Biscayne, Florida and San Clemente, California.

The Negative File subseries consists of the original color and black and white photographs and constitute the raw, unedited output of the White House Photo Office.

The Master Print File subseries is comprised of photographs selected by the White House Photo Office for aesthetic and technical qualities and covers many general subject categories.

The Master Contact Sheet File subseries contains contact sheets made from the Negative File, and serves as a finding aid to it.

Numbers in each Negative File sub-subseries were assigned chronologically from January 20, 1969 to August 9, 1974. Roll numbers from 0001 (January 20, 1969) to 9836 (August 18, 1972) cover the first Nixon Administration up until the Republican National Convention in Miami. Rolls in the nominally non-prefixed "first term" series often contain a letter prefix "C" to indicate color photographs. Roll numbers with a letter "D" prefix (D0001, etc) cover the period of the 1972 Presidential campaign, starting August 15, 1972 and ending January 19, 1973. Color photographs are indicated with the letter suffix "c", as in "D0002c." Letter "E" prefix roll numbers (E0001, etc) cover the President's second term, beginning January 20, 1973 and ending August 9, 1974 with the President's resignation. Color photographs are indicated with the letter suffix "c", as in "E3398c." Varying completion times, particularly for photography taken during long overseas trips, accounts for some variation in the general chronological sequence of the roll numbers. The Transparency File subseries is numbered with roll numbers beginning with "E-" (ie. "E-2-16") as distinguished from the Negative File, which contains numbers beginning "E" but without a dash separating the prefix from the roll number. Some slides from which a color internegative was produced also have a number referencing that negative number (C###, D###, E### or the like). A few slides may have an internegative number but no "E-" slide number. Others may have been left unnumbered at all by the White House Photo Office Staff. In those instances a number beginning with "X" (X611, for example) was assigned by Nixon Library staff to maintain item level control.

The Negative File subseries originally contained sub-subseries "A" roll numbers covering the 1968 campaign and sub-series "B", for "biographical", which were determined to be personal and returnable (restriction code "G" under the Presidential Recordings and Materials Preservation Act of 1974) and returned to the estate of the former President.

The Finding Aids for this collection include:

Please contact the Nixon Library staff for more information about these finding aids and to request custom database reports for your research project. Custom reports are recommended so that you may obtain the most updated metadata.