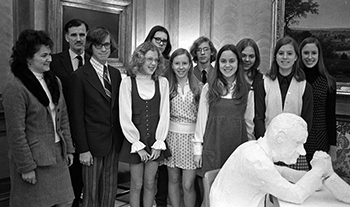 The Nixon Presidential Library and Museum has a wealth of programming, information and resources for students regarding Richard Nixon, his administration, and the 20th century.

For text of all of President Nixon's speeches to the public, see the Public Papers of the Presidents.

Listen to Audio Clips of Nixon discuss all kinds of topics from the Thanksgiving turkey to bombing Vietnam to choosing a Supreme Court justice.

There are hundreds of books and articles written about Richard Nixon and his times. Below is a list of commonly referenced printed materials. There is also a more extensive bibliography available as well as a timeline of 20th century social, cultural, and political events.

Have a question? Contact Us and read the Frequently Asked Questions